The Seven Wonders of the Ancient World is a well known list of seven remarkable constructions of classical antiquity. It was based on guide books popular among Hellenic (Greek) tourists, and only includes works located near the Mediterranean Rim. Written by Philo of Byzantium in 225 BC, the traditional list was neither the first, nor the last of such lists. The original Greek category was not "Wonders" but theamata, which translates closer to "things to be seen". The number seven was chosen because Greeks believed it to be magical. 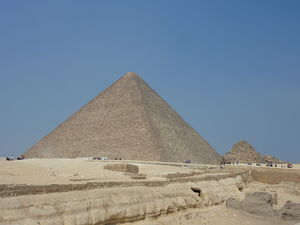 The Great Pyramid of Giza, also known as Khufu's Pyramid is the oldest and largest of the three pyramids in the Giza complex. In fact, it was he tallest man-made structure for 3,800 years. It was constructed in just 20 years, culminating around 2560 BC, a feat far beyond the engineering capabilities of the rest of the world for many years to come. It is believed to be built as a tomb for Egyptian king Khufu, known to the Greeks as Cheops.

There are three known chambers. The first to be constructed was the chamber known only as "the unfinished chamber". It was cut into the bedrock and left unfinished. The second chamber is the Queen's chamber, which is located further up, in the structure of the pyramid itself. The final chamber is called the King's chamber, and is located roughly in the center of the pyramid.

The four sides of the pyramid closely correlate to the cardinal directions on a compass, north, south, east, and west.

It is the only Wonder of the Ancient World that is still standing. 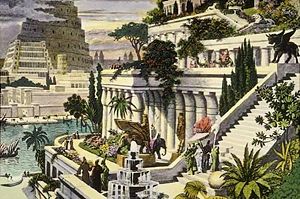 The Hanging Gardens of Babylon, also known as the Hanging Gardens of Semiramis, were built by Nebuchadnezzar II around 600 B.C, to please his sick wife who longed for the fragrance and natural beauty of the plants and trees of her homeland Persia. It was first described by Berossus, a Chaldean priest in the fourth century B.C. It was later documented by historians such as Strabo and Diodorus Siculus. The location may have been confused with gardens in Nimrud, due to tablets from the area depicting gardens of nearly the same scale. It is said to have been destroyed by earthquakes in the second century B.C.

The Hanging Gardens have never been proven to exist. There is much controversy regarding whether the gardens were an actual creation, or merely a poetic creation. The theories are bolstered by the lack of documentation of the Hanging Gardens in the chronicles of Babylonian History.

Statue of Zeus at Olympia

Main Article:Statue of Zeus at Olympia 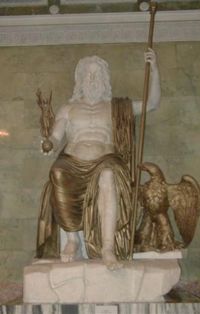 The Statue of Zeus at Olympia was built in the 5th century B.C. by Pheidias and was considered one of the Seven Wonders of the World. Olympia was a centre for the worship of Zeus, and the statue renowned for its quality. It was about 13 metres tall and housed in a Temple of Zeus. The statue was destroyed in a fire in A.D. 462.[1]

Temple of Artemis at Ephesus

For more information, see: Temple of Artemis at Ephesus. 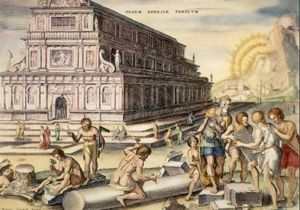 Fantastic reconstruction of the Temple of Artemis at Ephesus, 1572

The Temple of Artemis, also known inaccurately as the Temple of Diana, was a Greek temple dedicated to Artemis, the goddess of forests and hills, child birth, virginity, fertility, and the hunt. The temple, in it's most famous phase, was completed around 550 BC at Ephesus, in present day Turkey.

The first temple was destroyed by a flood in the seventh century, and by 550 B.C. they built the "new" temple. The construction had taken nearly 120 years. It was designed and constructed by the Cretan architect Chersiphron and his son Metagenes.

This temple was destroyed on 21 July 356 B.C. in an act of arson committed by Herostratus. According to the story his motivation was "fame at any cost". The very same day, Alexander the Great was born, and Plutarch remarked that Artemis was too preoccupied with Alexander's delivery to save her burning temple. Alexander later offered to pay for the rebuilding of the temple, however the Ephesians refused. Eventually, the temple was restored after Alexander's death, in 323 BC.

This reconstruction was destroyed in a raid by the Goths in 262 A.D.

The Ephesians rebuilt the temple again. According to the second-century Acts of John, the apostle John prayed publicly at the temple, exorcising its demons and "the altar of Artemis split in many pieces...and half the temple fell down."

The temple was rebuilt once more, and destroyed by a mob, led by St. John Chrysostom in 401.

Mausoleum of Mausolus at Halicarnassus 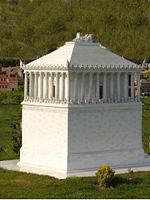 The tomb stood for nearly sixteen centuries before a series of earthquakes reduced the majestic monument to rubble. By 1404 AD only the base of the temple was recognizable, and today very little remains. 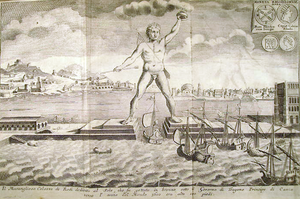 A speculative 18th-century depiction of the Colossus of Rhodes. Little is known about the appearance of the statue, however the pose of legs apart has been dismissed as impractical.

The Colossus of Rhodes was a statue of the Greek god Helios to celebrate the lifting of a siege. Chares of Lindos designed and built the statue, which took 12 years to build. It was about 33m high and collapsed during an earthquake in 226 B.C., just 56 years after it was finished.[2][3] Though the inhabitants of Rhodes wished to see the statue rebuilt this never came to fruition. However, the remains of a statue became a tourist attraction in their own right.[4] In 654 caliph Muawiyah captured Rhodes and the remains of the colossus were sold to a "Jewish merchant of Edessa". 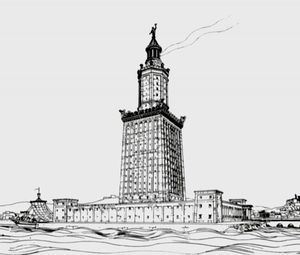 The Lighthouse of Alexandria guided shipping into one of the busiest ports of the ancient world, standing in the delta of the River Nile in Egypt. Known as the Pharos it took its name from the island on which it was built.[5] The Lighthouse was between 103m and 118m high and stood out on a generally low and featureless coastline. Built in the late 4th century B.C., the lighthouse was damaged by earthquakes and in the late 15th century A.D. a fort was built on the site. The Lighthouse of Alexandria survived the longest of the six fallen wonders.