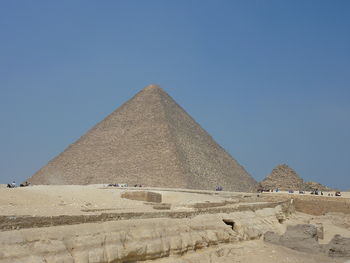 Pyramids were the funerary monuments of Ancient Egyptian royalty. The origins of this architectural style are difficult to date due to tomb robbing down the centuries, however the Great Pyramid of Giza drew on a tradition of monument building. The first stone-built pyramid was constructed in around 2670 B.C., built for King Zoser of the Third Dynasty.[2]

Near 450 BC, Greek historian Herodotus visited Egypt. There, he was told by Egyptian priests that more than 400,000 men had worked for around 20 years in order to build the pyramid, originally 481 ft tall, [3] which would serve as a tomb for the then-pharaoh Khufu, named Cheops in Greek. Over the years, it has suffered the attacks of grave robbers, who have taken gold and many treasures. [4]

The pyramid has a square base, with sides measuring 229 metres (751 feet). The builders' measurements were so accurate that the greatest variance between the length of sides is 0.2m (8 inches). It is uncertain precisely how many blocks of stone were used to build the pyramid, but estimates put the figure at 2.3 million, each weighing between 2 and 15 metric tonnes.[5]