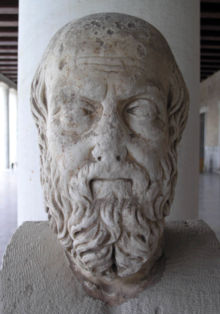 Herodotus of Halicarnassus (484 BC - ca. 425 BC) was an ancient Greek historian who lived in the 5th century BC and is regarded as the "father of history". He is almost exclusively known for writing The Histories, a collection of 'inquiries' (or 'ἱστορια', a word which passed into Latin and took on its modern connotation of 'history') about the places and peoples he encountered during his wide-ranging travels around the Mediterranean littoral and into Mesopotamia. The theme for this work was the conflict between the ancient Greeks and the Persians or "Medes".

Most of what is known of the life of Herodotus has been gleaned from his own work.

He was exiled from Halicarnassus after his involvement in an unsuccessful coup d'état against the ruling dynasty, and that he then withdrew to the island of Samos. (He seems never to have returned to Halicarnassus, despite the fact that he appears to have been very proud of his native city and its queen, Artemisia).

It must have been during his exile that he undertook the journeys he describes in The Histories. These journeys took him to Egypt as far south as the first cataract of the Nile, to Babylon, to the Ukraine, and to Italy and Sicily. Herodotus mentions an interview with an informant in Sparta, and almost certainly he lived for a period in Athens. In Athens, he obviously became familiar with the oral traditions of the prominent families, in particular the Alkmaeonidai, (to which Pericles belonged, on his maternal side). However, as the Athenians did not accept foreigners as citizens, Herodotus must have felt distinctly out of place there. Indeed, when Athens sought citizens for the Italian colony of Thurii in 444 BCE, Herodotus' name was among the willing. Whether or not he died in his adopted city is uncertain.

At some point, Herodotus became a logios -- a reciter of logoi or stories, written in prose. (It is important to emphasize that his work was originally presented orally, and was designed to have an almost theatrical element to it). His subject matter often encompassed battles, other political incidents of note, and, especially, the marvels of foreign lands. He made tours of the Greek cities and the major religious and athletic festivals, where he offered performances and expected payment.

In 431 BCE, the Peloponnesian War broke out between Athens and Sparta. It may have been that conflict that inspired him to collect his stories into a continuous narrative. Centering as they do on the theme of Persia's imperial progress, which only a united Athens and Sparta had managed to resist, they may be seen as a critique of, or an attack upon, the war-mongering that threatened to engulf the entire Greek world.

Herodotus has passed on to us a large amount of the information concerning part of the world that was current in his own day.

For example, he reports that the annual flooding of the Nile was said to be the result of melting snows far to the south, and comments that he cannot understand how there can be snow in Africa, the hottest part of the known world. Of course, we know that this is, in fact, not the actual cause; but if it were not for Herodotus' method of comparing all theories known to him, we might never have discovered that such hydrological speculation existed in ancient Greece. (He also passes on reports from Phoenician sailors that, while circumnavigating Africa, they 'saw the sun on the right side while sailing westwards'. Thanks to this brief mention, which is almost an afterthought, modern scholars have been able to establish that Africa was indeed circumnavigated by ancient seafarers -- for this is precisely where the sun ought to have been.)

Written between 430 BCE and 424 BCE, The Histories were divided by later editors into nine books, named after the nine Muses (the 'Muse of History', Clio, represented the first book).

As the work progresses, it becomes apparent that Herodotus is fulfilling his opening desire -- to "prevent the great and wonderful actions of the Greeks and the Barbarians from losing their due meed of glory; and to put on record what causes first brought them into conflict." Indeed, it is only from this perspective that his opening discussion of ancient wife-stealing is comprehensible: he is attempting to discover who first made the "west" and the "east" mutual antagonists, and myth is the only source he can delve into for information on the subject.

The first six books deal broadly with the growth of the Persian Empire. The tale begins with an account of the first 'western' monarch to enter into conflict with a 'eastern' people -- Croesus of Lydia attacked the Greek city-states of Ionia, and then (misinterpreting a cryptic oracle), also attacked the Persians. (As occurs many times throughout The Histories to those who disregard good advice, Croesus soon lost his kingdom, and nearly his life). Croesus was defeated by Cyrus the Great, founder of the Persian Empire, and Lydia became a Persian province.

The second book forms a lengthy digression concerning the history of Egypt, which Cyrus' successor, Cambyses, annexed to the Empire. The following four books deal with the further growth of the Empire under Darius, the Ionian Revolt, and the burning of Sardis (an act participated in by Athens and at least one other Greek polis). The sixth book describes the very first Persian incursion into Greece, an attack upon those who aided the Ionians and a quest for retribution following the attack upon Sardis, which ended with the defeat of the Persians in 490 BCE at the Battle of Marathon, near Athens.

The last three books describe the attempt of the Persian king Xerxes to avenge the Persian defeat at Marathon and to finally absorb Greece into the Empire. The Histories end in the year 479 BCE, with the Persian invaders having suffered both a crushing naval defeat at Salamis, and near utter-annihilation of their ground forces at Plataea. The Persian Empire thus receded to the Aegean coastline of Asia Minor, still threatening but much chastened.

It is possible to see the dialectic theme of Persian power and its various excesses running like a 'red thread' throughout the narrative -- cause and effect, hubris and fate, vengeance and violence. Even the strange and fantastic tales that are liberally sprinkled throughout the text find their source in this momentum. At every stage, a Persian monarch crosses a body of water or other liminal space and suffers the consequences: Cyrus attacks the Massagetae on the eastern bank of a river, and ends up decapitated; Cambyses attacks the Ethiopians to the south of Egypt, across the desert, and goes mad; Darius attacks the Scythians to the north and is flung back across the Danube; Xerxes lashes and then bridges the Hellespont, and his forces are crushed by the Greeks. Thus, though he strays (and sometimes strays rather far) off of this main course, he always returns to the task at hand—answering the question, how and why did the Greeks and Persians enter into the greatest conflict then known, and what were the consequences?

Herodotus' invention has earned him the twin titles The Father of History. There has long been a debate -- at least from the time of Cicero's 'On the Laws' (Book 1, Chapter 5) -- concerning the veracity of his tales, and, more importantly, concerning the extent to which he knew himself to be creating fabrications. Indeed, every manner of argument has surfaced on this subject, from a devious and consciously-fictionalizing Herodotus to a gullible Herodotus whose sources 'saw him coming a long way off'.

There are many cases in which Herodotus, either uncertain of the truth of an event or unimpressed by the lacklustre "facts" presented to him, reports the several most prominent accounts of a given subject or process and then opines as to which he believes is the most probable. Though The Histories were often criticized in antiquity for bias, inaccuracy and even plagiarism,[1] this methodology has been seen in a more positive light by modern historians and classicists, especially those searching for an example of relatively objective historical writing. Attacks have been made by several scholars in modern times, a few even arguing that Herodotus exaggerated the extent of his travels and completely fabricated sources -- that he made up more than one on a given topic is worse, they seem to say, not better.

Discoveries made since the end of the 19th century have helped to rehabilitate Herodotus' reputation a great deal. The archaeological study of the now submerged ancient Egyptian city of Heraklion and the recovery of the so-called "Naucratis stela" lends substantial credence to Herodotus' previously unsupported claim that Heraklion was founded under the Egyptian New Kingdom.[2]. Because of this recent increase in respect for his accuracy, as well as the quality and content of his observations, Herodotus is now recognized as a pioneer not only in history, but in ethnography and anthropology as well.

In a political sense, Herodotus has spoke more clearly to the modern world as the Athenian democratic ideal, which he championed, came to be privileged over Rome after the Greek, French, and American revolutions gave imperialism a decidedly unfavorable image. The swing toward idealistic republicanism was further advanced by George Grote's unprecedentedly liberal History of Greece, (12 vol 1846 and 1856), which praised Greek democracy.

In a historiographical sense, the methods and assumptions used by Herodotus have come back into fashion in recent decades. Green (2008) points to the recent popularity of social and ethnographic anthropology. Herodotus' discussions of different customs and cultures, taking up most of the first four books, are distinctly postmodern. His stress on personal motivation (as opposed to abstract economic or political trends) and on the roles of women in public affairs are now in fashion. The late 20th century came to a new appreciation of the workings and validity of oral transmission, thus rebutting critics who dismissed Herodotean anecdotes as mere crowd-pleasing digressions. Oral transmission models helps explain his careful evidential distinction between seeing (opsis) and hearsay (akoê). He depicts many of the Persians, despite belonging to the "Barbarian Other", with honor and dignity, even during the final critical story of Xerxes' invasion. Herodus displayed an insatiable and open-minded curiosity about the unfamiliar, including his undemonized enemies, that wins favor among scholars in the 21st century.[3]