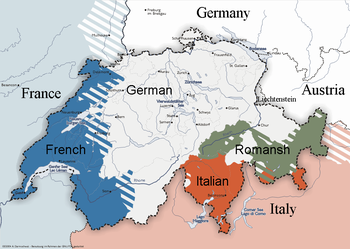 The Romansh language is shown in green on the right side of this map of the languages of Switzerland. 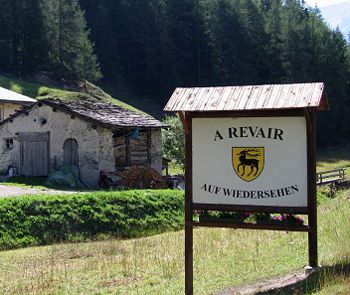 (CC) Photo: Jean-Christophe Wüthrich
Romansh and German are widely used in eastern Switzerland. Romansh is closer to French than Italian, though speakers of the latter live closer to the Romansh area; here, the Romansh for 'goodbye' appears similar to the French au revoir.

Romansh (in its own language: rumantsch) is a Romance language spoken in the Graubünden canton of eastern Switzerland, and is one of the official languages of the country. It is the native language of about 35,000 Swiss people,[1] but the name is actually an umbrella term for several dialects, with each speech community in the region using different names for them. The word 'Romansh' is itself an anglicisation of the various local language names, including rumantsch in Romansh itself[2] and Romanisch in German.[3] It is most closely related to Ladin and Friulian, languages spoken in northern Italy, and together these form the Rhaeto-Romance sub-family of Gallo-Romance, a larger group that includes French (the closest major Romance language to Romansh) and - controversially - various other varieties spoken in northern Italy.[4] 'Rhaeto-Romance' is sometimes wrongly assumed to be a single language; on occasions, 'Ladin' has been used to mean any or all of these.

'Rhaeto-Romance' is a term occasionally applied incorrectly to the Romansh language itself, but is actually a distinct sub-family of Gallo-Romance, comprising the Romansh, Ladin and Friulian languages. These came about through contact between the Rhaetian people, who spoke an Etruscan or Indo-European tongue[5] and the conquering Romans, who introduced their subjects to Vulgar Latin. The Rhaetians developed some bilingualism and this is a trend which continues in the Romansh areas even today, although many speakers are not fluent in German or other languages.

To the west of the Rhaetian area lived the Helevetians, a Celtic people, and later the Germanic Alemanni tribes conquered the area. This led to Romansh being forged in a melting pot of different language families, as multilingual speakers lived alongside each other. Germanic influence continues on Romansh today as the language is characterised by heavy borrowing from Swiss German;[6] its own influence on German is minimal and this is very indicative of the move towards German in the region.

The use of Romansh was restricted in the past, as only Latin and German were used in religious documents until the seventeenth century. Though this restricted Romansh, it also allowed a high degree of local autonomy for Romansh communities, as knowledge of other languages was only required if Romansh speakers intended to leave their birthplace or travel elsewhere.[7]

The evidence of Romansh, Ladin and Friulian as separate languages did not stop some scholars from labelling them as varieties of Italian, or classifying them as 'dialects' of 'Rhaeto-Romance'. However, despite some comprehensibility with Ladin and Friulian, Romansh is not actually intelligible with either of them.[8] In addition, Romansh is a language in social and political terms as it is recognised as such by the Swiss nation. Claims that speakers of these languages can often understand each other are inconsistent[9] and this seems to be no more a case of mutual comprehensibility than the similarities between for example, modern French and Spanish.

There are at least five distinct spoken varieties of Romansh - Surselvan, Sutselvan, Surmeiran, Putèr and Vallader, each of which have several names and their own writing conventions (distinct orthographies). Scholars have not considered Romansh to be a language in its own right due to this autonomy. However, despite sometimes considerable differences, they are mostly mutually intelligible, so Romansh speakers of different backgrounds can still understand each other. The dialects are grouped together as a distinct language more on cultural and historical rather than linguistic grounds, as it is difficult to point to many shared features of these varieties; they differ in both phonology and syntax, with differences becoming more prominent with geographical distance.[10]

Research into Romansh has often been highly erroneous and politicised. The most accurate work was not produced until the late nineteenth century, when studies went beyond noting vague relations between the 'dialects' (actually the Romansh, Ladin and Friulian languages).

In 1832, J. Haller tried to link Romansh, Ladin and Friulian as an exclusive group of Gallo-Romance, as they are seen today. His method was the well-used process of comparing written texts of various dialects, including Surselvan and Vallader, and noting the presence of related features.[11] Also, C. Schneller in 1870 used grammatical criteria in a ground-breaking study to show Rhaeto-Romance as a sub-family rather than a single language with three main dialects: "We have a separate and independent branch of the Romance languages, granting even that its speakers have no common written language or even any consciousness of its inner unity."[12]

Schneller’s evidence comprised one particular fundamental feature - the palatalisation of velar stops ([k], [g]) before /a/, e.g. [k] becomes [c]. In 1873, Graziadio Isaia Ascoli went even further, noting more important shared features of 'Ladin' (Rhaeto-Romance), but never had the chance to prove that this evidenced more than a "linguistic family" rather than a new set of languages. Problematically, many of these shared features, and others subsequently discovered, do not apply to every language and dialect of Rhaeto-Romance.[13]

Carlo Battisti’s twentieth-century surveys suggested that the Rhaeto-Romance family was really a branch of the northern Italian dialects. Battisti’s view suggests fascist interests, in line with Italian claims on several Swiss regions at the time (see politics below). However, it seems that this was always Battisti’s belief; he very much favoured this view while still an Austrian citizen twenty years earlier.[14]

The spoken standard variety of Romansh, Rumantsch Grischun,[15] has enjoyed regular use only since the 1980s;[16] This has arisen in preference to using a single variety for interdialectal communication, despite Surselvan speakers accounting for nearly half of the Romansh population[17] and previous systems already in existence to write the different dialects. Previously, every attempt to create a standard failed, due to the large differences between dialects.[18] Nowadays, Romansh has the usual collection of grammars, dictionaries and the Bible, often created by language enthusiasts.

Native speakers of Romansh have to learn another of Switzerland’s languages, as is the case for Swiss citizens of other backgrounds. However, as they comprise a small minority in Switzerland, they may face what has been called an "enforced bilingualism";[19] most visitors to the region cannot communicate in Romansh, and many occupations entail learning another language, when speakers of the more widely-spoke tongues benefit from services in their own language.[20]

The Romansh are the most mobile of all the Swiss peoples and over half settle outside Graubünden, whereas 96% of German Swiss occupy German-speaking areas.[21] Chur, Graubünden’s main city, has been part of a German region since the fifteenth century when a fire destroyed much of it and the German-speaking workers sent to rebuild it never left.[22] To further restrict Romansh, geographical boundaries limit the integration of Romansh areas.

Recent studies have consistently dismissed the idea of the existence of Romansh monolinguals,[23] but this is at odds with the 1990 Swiss census, which recorded several hundred of them.[24] Many Romansh speakers today are bilingual to various degrees with Swiss German, but Romansh usage is less common amongst professionals: Swiss census statistics show that about 63% of professionals and 73% of unskilled workers use Romansh at work. Only Romansh usage amongst agricultural workers - about 91% - is comparable to that of other national languages outside Graubünden.[25]

The education of children begins in Romansh but soon switches to standard German only in most subjects. Swiss German is widely spoken in Graubünden, so Romansh-speaking children must also learn this before moving to standard German.[26] Later, another Swiss language is mandatory.[27] In higher education, no Swiss university has Romansh as a working language, meaning that speakers must learn another language to seek graduate careers.[28]

Romansh was awarded the status of a 'national language' in 1938 - recognised and supported but not used in government or bureaucracy. This was granted not out of a desire to maintain the language, but to frustrate the Italian dictator Mussolini. Throughout the 1930s, Italian fascists claimed that Romansh was no more than an Italian dialect and therefore the Romansh-speaking Swiss territories should become part of Italy, along with the Italian-speaking areas. The Swiss rejected Mussolini's designs by recognising Romansh for the first time.[29]

In March 1996, a plebiscite accepted Romansh as an 'official language', allowing its use in government. This victory was rather less important in practice, as ministries only had to use Romansh to deal with its speakers, and none of Switzerland's senior ministers were required to know the language.[30]

In broadcasting and the media, Romansh has stronger support, though only at a regional level. In practice, coverage of national and international affairs has appeared most often in German-language publications - another example of Romansh speakers requiring knowledge of a second language. There are some radio and television broadcasts in Romansh, but channels using other languages predominate.[31]