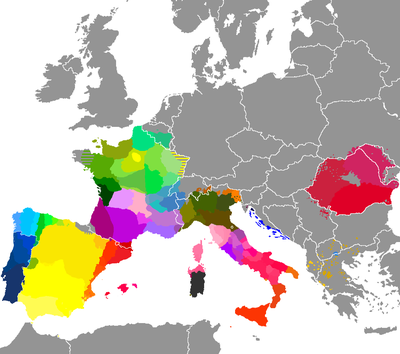 The Romance languages are a branch of the Indo-European language family, originally spoken in southern, eastern and western Europe and descended from Vulgar Latin, the language of the Ancient Romans. Today, Romance languages are spoken all over the world, those with the most speakers being Spanish, Portuguese, French, Italian and Romanian. The Romance-speaking territories may be called Romania (not to be confused with the European country of Romania).

These languages - more accurately, the 'standard' dialects of these languages - just happen to be among the most politically important or most widely-spoken Romance varieties in southern Europe and around the world today, and in linguistic terms their dialects form the ends of much smaller 'twigs' in the Romance language family, intermingled with many others. For example, Occitan (or Provençal) is a major language of southern France, Monaco and adjacent parts of Italy and Spain, but is little-known as it lacks political prestige. It may even be mistakenly assumed to be a French dialect, when in fact French and Occitan are very different, with Occitan more closely related to Catalan than it is to French. Similarly, Northern Italian is closer to French than to modern standard Italian; today's political borders are therefore a poor guide to the membership of the Romance language family.

Sardinian is somewhat controversially claimed to be closest to the Latin of the Romans in its structure.[1]