The question of the origin of music can be raised on manifold levels. It may involve biological, evolutionary, historical, artistic, or spiritual aspects. The following article focuses on the biology and evolution of music. It covers questions such as where, when, and why music evolved in both humans and the animal kingdom.

Comparative biology of music: in which species did music evolve?

Although the production of music as such is considered uniquely human, musical utterances of various degrees of complexity and perfection can be observed in several species in the animal kingdom. Acoustical utterances of comparatively low complexity that are innate and serve functions such as signalling danger to conspecifics are usually not regarded as music. The remaining musical expressions are divided into two groups: vocal music or “song” (complex, learned vocalizations) and instrumental music (structured, communicative sound using parts of the body other than the vocal organs and sometimes additional objects). Investigating animal music can shed light on the evolution of the human capacity for music. 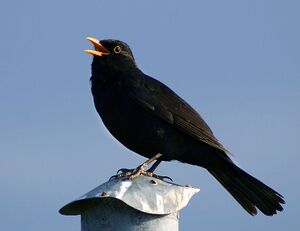 (CC) Photo: Malene Thyssen
Male blackbird: one of the best singers among birds

Vocalizations of sometimes amazingly high complexity and musicality have evolved several times in birds and mammals. Most research has been done on songbirds so far, but also parrots, hummingbirds, whales, seals and possibly other species show vocalizations that can be called musical according to above definition. Interestingly, there is no evidence of vocal learning of complex vocalizations in any nonhuman primate.

Birdsong is commonly regarded as the most complex vocal utterance in the animal kingdom. Some species, e.g. blackbirds, nightingales and white-rumped shamas, deliver vocal performances of outstanding musical quality that comes amazingly close to human music in many aspects. Traits of the latter such as an extensive repertoire of melodies, a sense of diatonic intervals, very precise pitch recognition and intonation, ability of transposition, melodic and dynamic variation, imitation, improvisation and composition (i.e. vocal learning) have been observed in songbirds in various degrees of perfection. In this respect, birdsong can be seen as a precursor of human music[1], although the question whether birdsong may justifiably be termed music at all has been answered differingly. Even great composers didn’t share the opinion on this matter: Stravinsky didn’t consider birdsong neither music nor art, whereas Messiaen, who studied birdsong over many years and wrote a series of major works inspired by it, regarded birdsong as most musical[2].

From an evolutionary point of view, it has been unargued since Darwin that birdsong is analogous, not homologous, to human song. Our common ancestor, a Paleozoic reptile, did not sing. The faculty of vocal learning and singing has thus evolved independently in both lineages.

Instrumental sound generation is very rare among animals. It seems to be limited to purely rhythmical elements, i.e. to drumming, thus lacking any melody or harmony. Our closest cousins, the African great apes (chimpanzees, bonobos and gorillas), do manual drumming – sometimes with both arms – on their own chest, the ground, on objects like resonating tree buttress roots and even on other individuals. Chimpanzees have been found readily adapting other surfaces to drumming including e.g. hollow walls. Drumming sequences are typically of short duration (around 1 s in both gorillas and chimpanzees, around 12 s in bonobos). It is currently unknown whether apes can entrain to an externally generated rhythm, or generate more complex rhythmic patterns than the steady isochronic pulse typically observed. Further drumming species include palm cockatoos, woodpeckers and kangaroo rats. However, bimanual drumming as such seems to be unique to the great apes and humans.

Nowadays, drumming is ubiquitous among human world musical cultures. Thus the existence of drumming in the great apes is a clear possible homologue of instrumental music in our own species.

As vocal music does not fossilize, nor do the soft tissue structures of the vocal tract, the timing of the origins of vocal music remains quite unsure. A recently discovered fossil indicator of a potential change in neural control of vocalization in humans is that modern humans have a larger thoracic vertebral canal than other primates. This enlargement may be linked to greater control over breathing, as this region contains motor neurons that control some respiratory muscles. Such increased breathing control is assumed to contribute to the faculty of complex vocalization and could thus be a cue to the timing of the origin of song. By comparing the thoracic vertebral cavity size among hominids, it has been concluded that increased breathing control occurred no earlier than late Homo erectus, i.e. roughly 500.000 years ago[3].

It is assumed that bimanual drumming is the oldest form of instrumental music, as it appears in our nearest relatives, the African great apes. However, fossil data is scarce in this particular field, since the body itself often served as the “drum”. The most abundant archaeological musical instruments are flutes made of bone. It is widely agreed, based on the analysis of these flutes, that instrumental music dates back at least around 37.000 years (which is the age of the oldest uncontested bone flute found at Geissenklösterle in Germany). It is likely though that instrumental music is much older, considering that instruments such as drums or rattles were made of perishable materials. There has been a still unresolved debate on a Neanderthal “flute” whether this artifact is properly considered a flute. Although its date is only a few thousand years older than the one from Geissenklösterle, it would push the evolution of instrumental music back to the common ancestor of Neanderthals and anatomically modern Homo sapiens – often equated with Homo heidelbergensis or Homo antecessor and estimated to have split around 500.000 years ago[3]

Why did music appear in evolution?

This natural question has often been reformulated in the following way: what, if any, adaptive functions does music serve? Which advantage did species possessing musical skills take so that they out-reproduced those that did not?

Few stones have been left unturned as to potential functions of music since Darwin posed the question. One major difficulty in answering it is that music doesn’t necessarily need to serve the same functions nowadays as it did when it evolved, and that these functions might vary between different species. The following hypotheses about the function of music are among the most common that have been brought up so far.

As a null hypothesis, it has been proposed that music has no adaptive function at all. It is seen as a mere byproduct of some other capacity such as language. Musical and linguistic skills, however, are dissociated among individuals in a population, and these differences seem to have a genetic basis. The existence of a separate faculty of music is supported by these findings, and this would allow to reject the null hypothesis.[3]

An often cited function of music, prominent both in the scientific literature and in the popular press, is in sexual selection, especially mate choice. Data e.g. on birdsong and whale song support this hypothesis. It was one component Darwin proposed as the cause for song evolution[3]. Others (e.g. Konrad Lorenz) stressed that this hypothesis is not able to explain why the most complex and - for the human listener - most beautiful birdsongs can be heard in situations where no biological function can be found[1][2]. No evidence is given at present that human music has a mate-choice function[3].

Terms like "vocal grooming" and "social lubricant" have been coined to describe music as a means to improve and consolidate kin and group cohesion[3].

The use of song between mothers and infants can be found all over the world. Lullabies are used in all cultures to soothe infants to sleep. It is apparently a human universal. The hypothesis that song has a deep impact on infant arousal has currently the best empirical support of all hypotheses.[3]

Play in young vertebrates is quite common. It can be understood as a form of practice for behaviours that will be useful for the individual when grown up. Similarly, it is discussed whether music listening or performance enhances non-musical skills (in both humans and e.g. songbirds). This hypothesis cannot explain though why musical behaviour can still be observed in adults.[3]

For more information on references see this article's Bibliography.