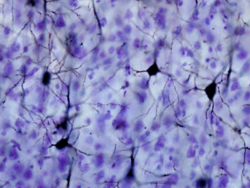 In biology, a neuron is a cell that specializes in information transfer, and the fundamental unit of the nervous system.[1] Neurons can initiate and transmit the electrical signals, called action potentials, necessary for the proper function of most biological organisms. The unique structure of a neuron is optimized to allow it to transfer information intracellularly from one part of the cell to another and intercellularly between cells. The three structural elements unique to neurons are the axon, which is used for intracellular information transfer, the dendrite, which is the site often used to receive information from other neurons, and the synapse, which allow them to transmit signals to other neurons in the organism.[2] Neurons also contain a cell body or soma which contains the cell nucleus and other organelles which are required for normal cell functioning. During the development of the nervous system many neurons go through apoptosis (cellular "suicide") process. In some parts this can be up to 70% of the neurons.

A typical neuron has only a single axon that protrudes from a specialized area of the cell body called the axon hillock and extends for various distances, from micrometers to meters, before branching extensively to form synapses. Adjacent to the axon hillock is the initial segment of the axon where microtubules form bundles. The plasma membrane in both the axon hillock and initial segment contains large amounts of voltage-sensitive ion channels and most action potentials start in this region. Axon diameter can vary between neurons though remaining more or less constant within each neuron. The constant diameter is maintained by regulating the cytoskeleton which then ensures a consistent rate of conduction. Invertebrate axon diameters tend to be much larger than those of vertebrate’s because they lack the myelinating glia that speed conduction of the action potential. Voltage gated ion-channels are distributed throughout the axon to maximize conduction. In myelinated neurons, sodium channels are concentrated at high density in the unmyelinated gaps, called the nodes of Ranvier. Such an organization allows a neuron to conduct an action potential long distances at a defined speed. [3] [4]