The cytoskeleton is a structural "scaffold" or "skeleton" that is present inside all eukaryotic cells. This dynamic, three dimensional structure fills the cytoplasms of cells; it maintains their shape, and enables them to move, using structures such as flagella and cilia. It also has important roles in the intracellular transport of vesicles and organelles) and in cell division. 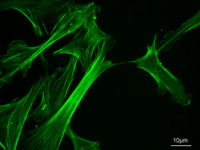 In, for example, epithelial (skin) cells of the intestine, microfilaments that project into the villi, give shape to the cell surface; microtubules project from the centrosome to the cell periphery; and intermediate filaments connect adjacent cells through desmosomes.

The cytoskeleton of mammalian Sertoli cells is one of the most elaborate that has been described. Actin filaments, vimentin-type intermediate filaments and microtubules all have distinct patterns of distribution that change during spermatogenesis. Actin filaments are concentrated in ectoplasmic specializations that are involved in intercellular adhesion, and at complexes involved with junction internalization during sperm release and movement of spermatocytes between neighbouring Sertoli cells. Intermediate filaments are in a perinuclear network which has peripheral extensions to desmosome-like junctions with adjacent cells and to small attachments to the basal lamina, and are thought to have a role in maintaining tissue integrity when the epithelium is mechanically stressed. Microtubules are involved in maintaining the columnar shape of Sertoli cells, with transporting organelles in the cytoplasm, with secreting seminiferous tubule fluid, and in intercellular communication. [3]

The cytoskeleton was once believed to be a feature only of eukaryotic cells, but homologues of the major proteins of the eukaryotic cytoskeleton have been found in prokaryotes.[4] [5]Cabeen MT, Jacobs-Wagner C (2010) The bacterial cytoskeleton Annu Rev Genet 44:365-92</ref> FtsZ was the first of these to be identified. Like tubulin, FtsZ forms filaments in the presence of GTP, but these filaments do not group into tubules. During cell division, FtsZ is the first protein to move to the division site, and is essential for recruiting other proteins that produce a new cell wall between the dividing cells.

Some plasmids encode a partitioning system that involves an actin-like protein ParM. Filaments of ParM exhibit dynamic instability, and may partition plasmid DNA into the dividing daughter cells by a mechanism like that used by microtubules during eukaryotic mitosis.

The bacterium Caulobacter crescentus expresses a protein, crescentin, that is related to the intermediate filaments of eukaryotic cells. Crescentin is also involved in maintaining cell shape, but how it does this is unclear.