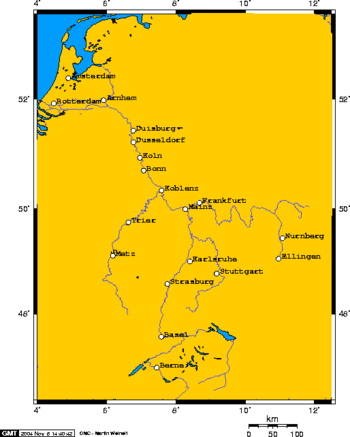 Neuss (local dialect Nüss, written Neuß till 1968) is a city in North Rhine-Westphalia, Germany. It is located on the west bank of the Rhine opposite Düsseldorf, and owes its success to its location at the crossing of historic and modern trade routes. The population of Neuss is currently around 152,000 and is well known throughout Germany for its Schützenfest.

Neuss is situated western of the Lower Rhine area across from Düsseldorf at the mouth of Erft and Rhine.

Neuss was founded by the Romans in the year 16 BC as a military outpost (castellum) south of the city, on the confluence of the rivers Rhine and Erft, with the name of Novaesium. Later a civil settlement was founded in the area of today's center of the town during the 1st century AD. Novaesium, together with Augsburg (Augusta Vindelicorum) and Trier (Augusta Treverorum), is one of the three oldest Roman settlements in Germany.

Neuss grew during the Middle Ages because of its prime location on several routes, by the crossing of the great Rhine valley, and with its harbour and ferry. During the 10th century, the remains of the martyr and tribune Saint Quirinus, not to be confused with the Roman god Quirinus, had been relocated to Neuss. This resulted in pilgrimage to the shrine of St. Quirinus even from countries beyond the borders of the Holy Roman Empire. Neuss was first documented as a town in the year 1138.

One of the main events in the town's history is the siege of 1474/1475 by Charles the Bold, Duke of Burgundy, that lasted for nearly a year. The citizens of Neuss withstood the siege and were therefore rewarded by the Holy Roman Emperor Friedrich III. The town was granted the right to mint its own coins and to carry the imperial coat of arms, the imperial eagle, and the crown in the town's own coat of arms. Neuss became a member of the Hanseatic League, although it was never accepted by the other members of the League.

In 1586, more than two thirds of the city was destroyed by fire, and several wars during the reign of King Louis XIV of France resulted in worsening finances for Neuss. Its importance as a place for trading declined rapidly, and from the mid-17th century onwards Neuss became a place only important for its agriculture.

From 1794 till 1814 Neuss was part of France during the reign of Napoleon. Then in 1815 Neuss became part of Prussia and was reorganized as a district with the municipalities of Neuss, Dormagen, Nettesheim, Nievenheim, Rommerskirchen, and Zons. The town had a population of 6,333 at that time. Neuss regained its economic power in the 19th century with increasing industrial activity and an expansion of the harbour in 1835. The city's boundaries were expanded in 1881.

In 1968 the city's name was changed from Neuß to Neuss. In 1975 the town of Neuss and the district of Grevenbroich were joined to form the district of Rhein-Kreis Neuss with a population of 440,000 and its seat of government in Neuss.

Neuss celebrates a yearly custom called Neusser Bürgerschützenfest. It consists of serveral parades and a carnival (called Kirmes) on the last weekend of August. About 6,000 people dress with period uniforms and march through the city to in honor of the civil defense in which citizens protected their city. Some of the uniforms are influenced by the French sovereignty. The festival in Neuss is organized by a single association and participants consist mainly of citizens from Neuss, contrasting with Hannover which celebrates a similar size Schützenfest with people from all over Germany.