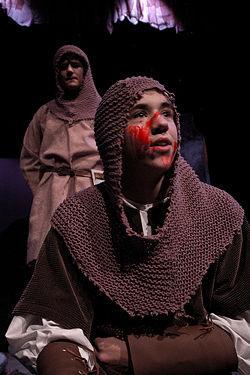 (CC) Photo: Jeff Hitchcock
Macbeth has been performed frequently all over the world since its first appeared in the early seventeenth century. This high school performance took place in Washington, USA in 2005.

Macbeth, fully The Tragedy of Macbeth, is one of the best-known plays of William Shakespeare. It was written in about 1606 and tells the story surrounding the murder of a Scottish king and the rise and fall of his killer, Macbeth. The play is the shortest tragedy Shakespeare ever wrote. It weaves a tale very loosely inspired by the existence of the real King Macbeth of Scotland (ruled 1040-1057) with supernatural imagery and themes of greed, revenge, bloodshed and curse. Although he made many changes to the original story about the reign of Duncan and Macbeth (1034-1057), Shakespeare's principal source was the Chronicles of Holinshed.

Macbeth was first published in the First Folio of 1623, seven years after Shakespeare's death, but it would have been performed at London's open-air Globe Theatre soon after its completion. Shakespeare would have had in mind the newly-crowned King James I (1603-1625), already James VI of Scotland, whose accession had united the throne of his country with England's after centuries of war.[1] James considered himself to be descended from Banquo, whom Macbeth killed, and he denounced witchcraft, which features prominently as an evil influence. In 1605, James had narrowly avoided death in the Gunpowder Plot, when Catholic conspirators tried to blow up the House of Lords. Regicide, or murder of a monarch, was therefore a familiar topic in 1600s England.

The bulk of the play is certainly by Shakespeare, and contains some of his most memorable speeches. But it seems to have been substantially edited between its earliest appearances on stage and its 1623 publication. The scenes which include the goddess Hecate are almost certainly additions by Thomas Middleton. The first lines of songs from his play The Witch occur.[2] Likewise, it may be significant that the play is shorter than Shakespeare's other tragedies - Hamlet, Othello and King Lear.[3] Some excisions may have been made: for instance, there is no explanation of the statement by Lady Macbeth, who is apparently childless, that she has given suck.

Macbeth is notable for its use of supernatural imagery, such as the appearance of three witches (a possible nod to James I, a keen persecutor of people declared to be so), and the use of darkness: about two-thirds of the play takes place at night. Modern audiences are familiar with the dark stage on which the play is mostly set, but it is worth remembering that any play at the Globe would have been performed in daylight, taking advantage of the open-air venue, and without the benefit of modern theatrical lighting. This is one reason why the play makes reference to darkness and the night; these lines, supplemented with burning torches and candlelight, would have united to create the effect of darkness in what was actually a daylit theatre.[4]

Two of King Duncan's generals, Macbeth and Banquo, returning victorious from a battle, meet three witches on a heath. The witches greet Macbeth as Thane of Glamis (as he is at the time), Thane of Cawdor, and king hereafter. They greet Banquo as the ancestor of kings. On the witches' disappearance, a messenger informs Macbeth that Duncan has made him Thane of Cawdor. Hearing of this, Lady Macbeth determines that her husband must force his way to the throne, and the couple are aided in this by Duncan arriving at their castle. Macbeth murders Duncan in his sleep, Duncan's two sons, Malcolm and Donalbain, flee the country, and Macbeth becomes king. He arranges the death of Banquo and his son, but the son escapes. After a scene showing Lady Macbeth's disturbed state of mind, she fades from the plot, and the rest of the play is dominated by Macbeth. Fortified by further prophecies from the witches, but warned by them to beware the Thane of Fife, Macduff, who has gone to England to support Malcolm's claim to the throne, Macbeth slaughters Macduff's family. An English army invades to place Malcolm on the throne, and the witches' prophecies, though true in word, prove to have been misleading. Macbeth is killed by Macduff and Malcolm is hailed King of Scotland.

The knocking on the gate

In his essay, The knocking at the gate in Macbeth, de Quincey argues that the scene after the murder of Duncan, in which a comic porter delays to answer persistent knocking at the castle gate, represents a return from the "fiendish" world to the human. This may be so, but probably uppermost in the playwright's mind were the need to provide some light relief between two scenes of high tension, the murder and its discovery; and the wish to give a role to the company's professional Clown.

There is a theatrical superstition that the play should not be named in certain circumstances, instead being referred to as "The Scottish play".