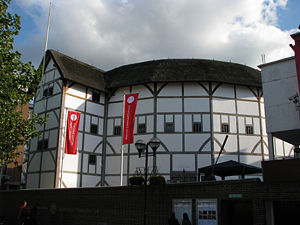 (CC) Photo: Mckay Savage
Modern reconstruction of the Globe Theatre that stands near the original site in London. 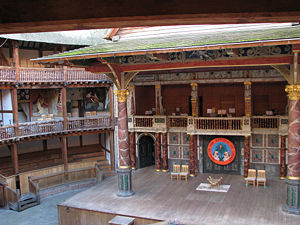 (CC) Photo: Mckay Savage
The stage of the reconstructed Globe Theatre, as seen from the upper balcony.

The Globe Theatre was the open air theatre constructed by the Lord Chamberlain's Men in 1599. The Globe was an octagonal structure with a thatched roof over the stage and the galleries, but also an open area which provided inexpensive admission for the poorest playgoers. The original Globe remained in operation until it was destroyed by fire in 1613. A rebuilt Globe continued until The Closing of the Theatres in 1642. A reconstruction of the Globe, near its original site, opened in 1997.