Theater in the round 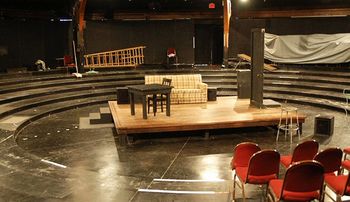 Inside of the round Carousel Theater, University of Tennessee, Knoxville. This space, built in 1952, is well suited to intimate productions. 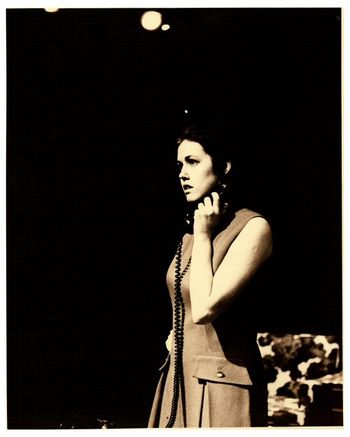 A scene from a Max Frisch play (staged in 1975) in a 3/4-round theater; note the visibility of lighting fixtures to the audience, and that the audience were in darkness, with only the center lit, while seated very close to the actors.

Theaters in the round were common in ancient times, and although it never fell completely into disuse, the modern theater as it developed in Europe and America, generally favoured the proscenium theatre, which allows for grander productions. When the theater in the round format was revived in the mid-twentieth century, it was considered avant garde and progressive.

One advantage of theatres in the round is that they can dramatically reduce the need for lavish or complicated sets, in terms of curtains and scenery. A disadvantage is the extra staging considerations. Rather than the actors being able to focus to one direction, the director and set designer have to consider what the production will look like from different points of view, and how to eliminate or at least reduce the problem of characters having their backs to the audience.

The Stephen Joseph Theatre in Scarborough, North Yorkshire was the UK's first theatre in the round.[1]

Theater in the round is a particularly appropriate setting for staging of dramas using Bertolt Brecht's alienation effect, which stands in opposition to the more traditional Stanislovski technique in drama. Whereas the Stanislovski school of acting attempts to immerse the audience so deeply in belief of its characters that they can imagine themselves as the character, the Brechtian alienation effect deliverately tries to remind the audience that this is a fictional representation. Alienation techniques include tactics as obvious as displaying placards or posters around the set. With theater in the round, merely keeping the audience lit so that each audience member is constantly aware of the rest of the audience can act as an alienation technique.