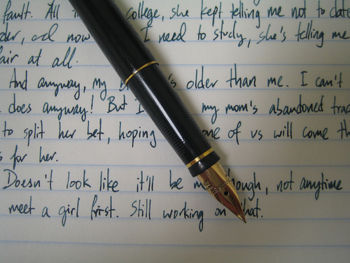 The Roman alphabet or Latin alphabet is the most used writing system today, belonging to the category of alphabets, initially designed for transcribing the Latin language (which was spoken by Roman people), then extended to many other languages across the world.

Some anglophone authors make a distinction between Roman alphabet (in a broad sense, comprising the differing variants of this alphabet, designed for different languages) and Latin alphabet (the more specific variant—or variants—of this alphabet used for the Latin language). Such a distinction is not systematic. In the printing and publishing industry, "roman" refers to upright letters as distinct from italic.

The original version of this alphabet was used by the Romans for the Latin language. It is derived from, and very similar to, the Greek alphabet. The Romans adopted the alphabet via the Etruscans, who had adopted it from the Greeks who had colonized Sicily and the southern Italian peninsula. The "West Greek" alphabet was slightly different from the East Greek alphabet which evolved into the modern Greek alphabet, which caused some of the letterform changes. The Etruscans had no sound for [g] (voiced velar stop) in their language, but three different [k]-like sounds (close to a voiceless velar stop), and so adopted the Greek gamma to represent a [k] sound; but the shape of the West Greek gamma was actually similar to Latin C (instead of being similar to East Greek Γ), and eventually the letter morphed into the modern Latin letter 'C'.

With some modifications, and more often called the Roman alphabet, this alphabet is the writing system currently used for a great number of languages around the world. It is used by some international languages such as English, Spanish, German, and French, as well as all the other Romance languages, all the other Germanic languages, some Slavic languages, Turkish, Albanian, Hungarian, Finnish, Malay-Indonesian, and Vietnamese. Since the 19th century, it has been used by many languages of Africa, Asia, Oceania and the Americas that have been codified under western European influence.

The Roman alphabet is also used as an alternate—but secondary—writing system for Chinese as Pinyin, and for Japanese as Romaji.

Then, early Latin added G (derived from C) in the 3rd century BC in order to distinguish the [g]-sound (G) and the [k]-sound (C). Later, classical Latin added Y and Z thanks to Greek borrowings during the 1st century CE:

An innovation emerged in Late Antiquitity and at the beginning of the Middle Ages. Each letter was doubled progressively in two shapes: the classical uppercase and the innovative lowercase.

During the Middle Ages, new signs appeared in the Latin writing system. Scribes adopted J as a variant of I and U as a variant of V. That is, I and J were two shapes of the same letter and U and V were also two shapes of the same letter (to be compared with the shapes “a” and “ɑ” nowadays). The sign W appeared also in the Middle Ages, firstly as a ligature of VV (or UU) in some Germanic languages and in Germanic borrowings integrated in Latin. The ligatures Æ and Œ were an innovation of Medieval Latin, since Classical Latin used to write AE and OE separately. Thus, the basic collection of signs had become the following in the Middle Ages:

From the 16th century on, several attempts of distinction occurred between I and J and between U and V, working thus as separate letters or separate sounds:

Similarly, W was more and more viewed as a letter on its own, rather than a ligature of letters UU or VV.

Finally, the current, typical version of the Roman alphabet emerged during the Modern Era, especially in the 18th century, when grammarians, academics and printers of several European languages accepted to consider more and more J, U and W as independent letters. It has to be noted that U were placed before V in the alphabetical order. On the other hand, ligatures Æ and Œ, despite their frequent use in Modern Latin, were not recognized as letters on their own in most languages (only Danish, Norwegian, Faroese and Icelandic viewed Æ as a real letter).

The most typical variant of the Roman alphabet is now the English alphabet, which is similar to that of other widespread languages such as Malay, Portuguese, German, French or Dutch, with the following twenty-six letters in the following order:

Each letter occurs in two shapes:

Note that English and Malay rarely use other characters than the above-mentioned, twenty-six letters. But several languages which have the typical version of the alphabet use extra characters without considering them as proper letters. They can be:

Since the Middle Ages, many languages have added letters like Þ, Ȝ or Ƿ for additional sounds. Some languages have adopted certain digraphs, sometimes considered as letters (such as Hungarian SZ or GY), and added a wide variety of diacritic marks to many of the letters, sometimes considered as new letters (such as Ð, Ē, Ť, Å, Ç and so on). Some languages have also abandoned various letters. Thus, the Roman alphabet has now many variants adapted to the needs of different languages. Here are a few examples; extra letters that do not belong to the typical, English variant are in bold; a dash (—) indicates eliminated English letters:

A few languages even adopt a radically original alphabetical order:

Each letter bears a name that can vary according to the language in use. Here are examples in some widespread languages (letter names are noted here with the phonetic alphabet in square brackets and then with the general spelling conventions, although such notations are rarely seen in general use).

Some characters of the Latin alphabet (C, D, I, L, M, V, X) are used in the Roman numeral system; unlike the Greek numeral system, not all the letters are used as numbers.