This article is about Hawaiian language. For other uses of the term Hawaii, please see Hawaii (disambiguation).

“An interminable language……it is one of the oldest living languages of the earth,

As some conjecture, and may well be classed among the best
...the thought to displace it,
Or to doom it to oblivion by substituting the English language,
Ought not for a moment to be indulged.
Long live the grand old, sonorous, poetical Hawaiian language.”

Hawaiian, also written Hawaiʻian (in its own language: ʻŌlelo Hawaiʻi), is the autochtonous language of Hawaii (U.S. state); it belongs to the Polynesian languages, which are part of the wider family of the Austronesian languages.

The Hawaiʻian language is one of the oldest living languages, being roughly ten centuries old. Captain James Cook first recorded it on the island of Kauaʻi in 1778. He immediately noticed similarities to Tahitian and Maori, and even used Tahitian words and gestures to communicate with the native Hawaiians. Early voyagers described the language as "primitive, childlike, lilting, effeminate, and simple". The reduplication and abundance of vowels seemed like babytalk to them. 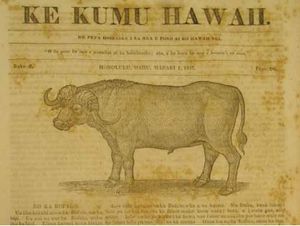 Despite a large European influence, and huge amounts of immigrants of various ethnic backgrounds, Hawaiʻian remained the main language used in daily life, schools, and the government. Plantation workers had to learn Hawaiʻian in order to communicate with their co-workers, or else used other [[pidgin (language)|pidgin] languages brought from elsewhere. Over time, a Hawaiian Pidgin, based on the vocabulary of the Hawaiian language, developed alongside Hawaiian, but by the early twentieth century workers had developed an english-based creole, known today as 'Pidgin'.

In the 1820's Hiram Bingham and several other American Protestant missionaries began work constructing an alphabet to represent the sounds of the Hawaiʻian language. Up until this point Hawaiʻian had been passed down from generation to generation as an oral tradition. For the first time Hawaiʻians could write their language down, and began learning to read as well. After the bible was translated into Hawaiʻian in 1839, literacy on the Hawaiʻian islands soared. Hawaiʻi quickly became the most literate kingdom in the world. The influence of the United States of America promoted the use of english quite aggressively however. Following the overthrow of the Kingdom of Hawaii in 1893 and the annexation of Hawaiʻi in 1898 the Hawaiian language was banned from public schools and the government. For the first time ever, the Hawaiʻian language was not being taught in any school, not even the Kamehameha schools - a private school system reserved only for children of Hawaiian descent. This did not prevent the people from using the Hawaiʻian language in their daily lives however, and fourteen newspapers continued to print exclusively in Hawaiʻian. The most notable of these are "Ka Lama Hawaiʻi" and "Ke Kumu Hawaiʻi".

Starting in the 1970's there was a great renewal of interest in the Hawaiʻian culture, and with it came a revival of the Hawaiʻian language. In 1978 Hawaiʻian became an official language of the State of Hawaiʻi, making Hawaiʻi the only state with two official languages. The same year, Hawaiʻian Cultural Education became a mandatory course for public schools in Hawaiʻi. The course is still mandatory, though most schools have redubbed it "modern history of Hawaiʻi". 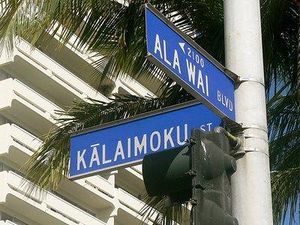