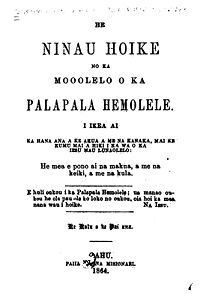 Officially titled “Ka Palapala Hemolele a Jehova Ko Kakou Akua Buke I & Buke II”, the Palapala Hemolele was the first translation of the Bible into the Hawaiian language. Translations of the Gospels of Matthew, Mark, and John were printed in Rochester, New York, in 1828-29. A complete New Testament in Hawaiian was printed on the island of Oahu in 1832, and the entire Bible was produced in Honolulu in 1837-39 for the American Bible Society. The translators were missionaries of the American Board of Commissioners for Foreign Missions, including Hiram Bingham, Asa Thurston, and William Richards.

Due to a lack of proper printing tools, the missionaries did not include diacritical marks, such as the ʻokina (glottal stop) and the Kahakō (Macron). In normal writing missionaries often substituted an apostrophe for the ʻokina, but decided that that they could not risk the confusion it invariably caused in the actual transation of the bible. The missionaries specifically requested their sponsor in Boston to send them some type (fonts) with macrons, but the sponsor made only one response and sent the wrong font size (pica instead of small pica). Thus the original Palapala Hemolele is devoid of both ʻokina and macron’s, often causing confusion for modern students reading the original texts.

A second translation, "Baibala Hemolele," was produced by Ephraim Clarke in 1868. This translation was not diacritically marked either, and was a translation from the Palapala Hemolele, into an easier to understand form, much in the way that the New Living Translation of the english bible is.

In 1994 the American Bible Society printed a third translation of the bible, and unlike earlier translations, this one was diacritically marked. The 1994 version became a staple of churches throughout Hawaii, and is the most widely available translation.

Sponsored by the nonprofit Partners in Development Foundation, 'Ahahui Baibala Hemolele began in 2002. Under the leadership of Jack Keppeler the 'Ahahui Baibala Hemolele grew into an immense operation. The first phase of the project was to have the existing text typed into computers, a job done in India. In 2008 the project launched www.baibala.org, a web site that includes digital images, text versions, and spoken recordings of every page of the 1839 Palapala Hemolele, 1868 Baibala Hemolele, and the 1994 Baibala Hemolele. The project is also republishing the original Palapala Hemolele. The second phase of the project was development of a software program by language specialists at the University of Waikato, New Zealand. The program inserts diacritical marks into the text, something the original translations lacked. After the program is done with a page a team of editors go over the page word by word, making sure each mark is in the correct place. Hawaiian-language teacher Sarah Keahi is senior editor, and the team of interpreters includes Lawrence Keola Wong, a Kamehameha Schools instructor, and his wife, Annette Ipo Kamahele, who grew up on the island of Niihau. To emphasise the importance of the ʻokina, Keppeler used "malu" as an example. "It can mean shade or protection, but mispronounce it and it can mean spying, secrecy."

Keppeler has announced that the translation should be ready to print sometime in late 2009, and will be available in hardback.