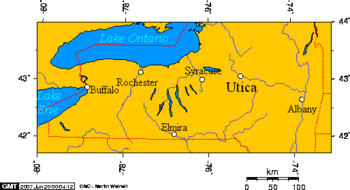 Rochester, New York is a city in New York State on the shore of Lake Ontario.

Rochester was, for many decades, the home of the photographic firm Kodak.

In 1948 Thomas Dewey, who was then the Governor of New York, ran for President of the United States.[1] Most of New York State voted for Dewey. Rochester was an exception, voting for Harry S. Truman. It is reported that when Dewey was defeated, and focussed on Goverrning New York State, he chose to retaliate against Rochester, by changing the route for the nascent interstate highway system, so it didn't serve Rochester, and that this triggered a long collapse in Rochester's economy, from which it never recovered.

In 2004 a fast ferry service was initiated between Rochester and Toronto, Ontario, Canada.[1] Rochester authorities hoped the ferry would help revitalize Rochester.

Rochester, like nearby Toronto has deep water offshore that is sufficiently deep that it will be below the thermocline all summer. Rochester could implement a deep-lake water cooling system, to use the renewable resource of the lake's cold water to cool buildings in summer.