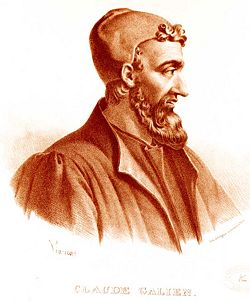 Succeeding Hippocrates of Cos, the honor of most influential historical figure in rational Western medicine goes to Galen, born to a wealthy Greek family in the prosperous city of Pergamum (or Pergamon) — then part of the 2nd century Roman empire in Asia Minor and now modern-day Bergama in northwestern Turkey near the Aegean Sea — in 129 CE, almost 600 years after the birth of Hippocrates of Cos. Galen regarded himself as the intellectual heir and interpreter of Hippocrates, and like Hippocrates took as fundamental the idea that understanding disease required understanding the the structure and workings of the human body. He studied human bones and caught glimpses of internal human anatomy and functioning from tending the wounds of gladiators, dissected non-human animals,[1] performed experiments on living animals, delivered many popular public lectures and demonstrations of animal dissections, and developed a philosophy that emerged from his knowledge of medical biology and extended beyond medicine.

Galen taught us much of what we know about Hippocrates and of the diverse Greek medical traditions that developed after Hippocrates' death. He codified, elaborated on, and advanced those traditions, in the process gaining a reputation that essentially installed Greek medicine in the Western world for more than a millennium after his death. In the Introduction to his English translation of Galen’s On the Natural Faculties, Arthur John Brock, M.D., summarizes it succinctly" [2]

Galen had no deficiency of hubris. He boasted that his teachings, available from his voluminous writings, embraced all one needed ever to know about medicine. As a philosopher as well as a physician, he repeatedly stressed in his writings that to be the best physician one should also be a philosopher.

Galenism dominated medicine and medical biology for some 1400 years after his death in ca. 200 CE, to such an extent as to stifle further advances in the discovery of anatomy, physiology and the pathogenesis of disease during that period. <font-size=0.97em>"At least until the 16th and 17th centuries, to know medicine was to know it as Galen wrote about it in the 2nd century."</font>[3] Medical historian, Vivian Nutton writes:

That produced something of a set-back in the development of Western rational medicine, the remedy beginning with the father of 'modern' human anatomy, Andreas Vesalius. Yet Galen's ideas influenced medical thinking even until the 20th century.

The classicist and Greek-to-English translator of many of Galen’s writings, Peter Singer, cautions us against blaming Galen as if he was "....endowed with the capacity posthumously to bully his posterity, for the uncritical attitude towards him of his successors."[5] One can appreciate Singer’s words of apologia best in context:

Galen’s reputation during his lifetime spread throughout the Roman Empire. He eventually became the personal physician of the Roman Emperor, Marcus Aurelius (b. 121 CE, d. 180 CE; r. 161-180 CE). 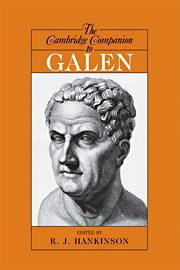 As described above, Galen first saw the light of the world in Pergamum (Pergamon), an Asia Minor, Roman ruled city of notable prosperity and culture, extant in present day Turkey as Bergama, near the Aegean Sea. Pergamum had existed before the time of Alexander the Great, and had became an intellectual and cultural center. It had a famous library containing some 200,000 works. Galen’s father, Nicon (or Nikon), a wealthy architect who valued education, educated his son in mathematics, geometry and philosophy, an unusual course compared to the emphasis of Roman schools on rhetoric and literature. In addition, even as an adolescent, Galen could attend lectures by the many philosophers who traveled to Pergamum to access its voluminous famous library.

Nicon steered his son into a career in medicine following a ‘Hippocratic’ dream so advising him. He sent Galen to the Hippocratic school in Pergamum. Galen’s interests, attested to in his own writings, included mathematics and philosophy, which he maintained and incorporated in his work throughout his career, as well as the writings of the Hippocratic physicians and of the history of medicine from before and after Hippocrates. Despite his interest in mathematical he made no breakthroughs in physiology through the use of mathematics.

After his father died (ca. 148-149), Galen continued his medical education by training with physicians in other cities (Smyrna [where he wrote his first treatise, On Medical Experience, at age 20 years]; Corinth; Alexandria), as the Hippocratic physicians advised travel as a path to excellence for physicians. In Alexandria, he could study humans bones, but the Roman ban on human dissections limited his education in human anatomy. He learned that Hippocratic medicine had undergone schisms into many different 'schools' with differing premises and philosophies, and at some point resolved to bring those together into a coherent whole.

Afterward, at age 28 years, he returned to Pergamum to become surgeon to the gladiators in the amphitheater and begin practicing medicine, which by his own account he succeeded well. In the amphitheater he treated gladiators with all kinds of open wounds, of the head, chest, abdomen, muscles, and bones. Glimpsing the various parts of the interior of the body, he began to wonder how they worked and how they worked together — musing about function, or physiology. After a few years, he moved to Rome, his reputation preceding him. He practiced medicine, treating famous and educated patients, and giving public lectures. He returnede to Pergamum when a plague broke out or when professional animosities dictated, then, by 169, at the age of 40 years he returned to Rome, summoned by the Emperor Marcus Aurelius to serve as one of his personal physicians (number two physician).[6] [7]

We begin this section with a brief excerpt from medical historian, Sherwin B. Nuland:

What prompts Professor Nuland to put forward that analysis?

Galen, along with Hippocrates, is one of the most prominent names in early medicine. After Galen's death, his works were widely disseminated in the Greek-speaking parts of the Roman empire, and the works of Galen were a touchstone for medical researchers in Constantinople and Alexandria. Where Galen had been verbose and made conflicting claims in different works, writers and teachers (such as Oribasios, Aetios of Amida, Alexander of Tralles, and Paul of Aegina) began to codify and systematize his writings in the centuries after his death. Medical teaching at Alexandria was to be particularly influential. Instead of teaching the entire Galenic corpus, teachers at Alexandria taught from a limited number of textbooks, and began to reduce the complexity of Galen's texts to a manageable number of central doctrines. (Furthermore, some scholars have suggested that some of the most popular works in the Galenic corpus are in fact later, Alexandrian creations.) In general, it was the systematized, Alexandrian form of Galenism that was dominant for much of its later history.

In the eighth and ninth centuries, scholars working under the Abbasid caliphate began to translate the works of Galen into Syriac and then Arabic. The physicians and philosophers under the caliphate had access to the full range of Galen's works (including some which have not survived). Under the caliphs, Galen came to be regarded as foremost among medical writers but unremarkable as a philosopher. Though some of this may have been because Galen was a pagan who, for example, expressed doubts about the immortality of the soul, most of this can be attributed to the greater prestige of Aristotle.

In the Renaissance, in the 14th and 15th centuries, the study and practice of medicine were greatly influenced by the prominence of humanist study. A wider range of Galen's works became available, and in the original Greek. Galen and Hippocrates both became revered as classical authors, and to some extent, educated Renaissance physicians were more preoccupied with textual study than with medical practice. For example, modern scholars have shown that even Vesalius remained deeply indebted to Galen.

In the course of the 16th and 17th centuries, Galen's star began to wane. Galen had only dissected Barbary Macaques, and his inferences about human anatomy began to be proven wrong. Interestingly, the Hippocratic corpus did not fall out of fashion: <font-size=0.95em>"Apart from pulse theory, Galen could not compete with the richness of Hippocratic clinical observations with their appearance of being less tied to theory."[6]