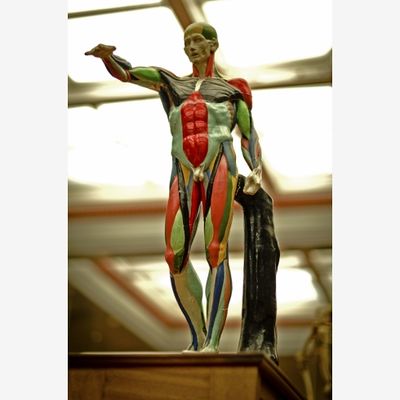 Painted glazed model showing the distribution of muscles throughout the body. From the Anatomical Museum of the University of Edinburgh. photo by Hugh Pastoll

The word anatomy has been traced back to the Indo-European root tem- meaning "cut". In ancient Greek the word ἀνατομέ (anatome) meaning "dissection" arose from a sythesis of ἀνα (ana) meaning "up" or "back", and τέμνειν (temnein) to cut. The word passed through Latin as anatomia, Old French as anatomie, and on into Middle English still as anatomie.