Gaius Iulius Caesar (Greek: ΓAIOΣ IOYΛΙΟΣ KAIΣAΡ[1]) was a prominent name of the gens Iulia since Roman Republican times, borne by a number of figures from history, most notably the dictator Julius Caesar. 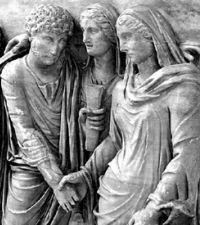 Gaius is an archaic Latin name and one of the earliest Roman praenomina. Before the introduction of the letter G into the Latin alphabet, i.e. before the censorship of Appius Claudius Caecus in 312 BC,[7] the name was only written as Caius. The old spelling remained valid in later times and existed alongside Gaius, especially in the form of the abbreviation C.

The only known original Roman etymology of Gaius is expressed as a gaudio parentum,[8] meaning that the name Gaius stems from the Latin verb gaudere ("to rejoice", "to be glad"). This etymology is commonly seen as incorrect, and the origin of Gaius is often stated as still unknown.[9] Some have linked the name to an unknown Etruscan phrase, others to the gentilician name Gavius, which possibly might have lost the medial v in the course of time.[10] But no supporting evidence has been found to this day.

The most promising explanation can however be found in the folk-etymological derivation from the Greek word γαῖα (gaîa, "earth"), specifically γῆ ("gê") or γᾶ ("gâ"), which is supported by the Roman vow of marriage that the fiancée had to give: Ubi tu Caius et ego Caia. ("Where you [will be], Gaius, likewise I [will be], Gaia.")[11] By the inclusion of Gaius and Gaia in the vow, the two names could of course be identified simply as "man" and "woman". But since the vow was originally an archaic rural ceremony, the vernacular explanation by the Romans, who had always been farmers, will have been "woman of the Earth" and "man of the Earth",[12] referring also to the agricultural property of the family. 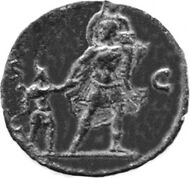 Aeneas leads Iulus out of Troy
© VRoma (Used by permission)
Virgil[13] and his commentator Servius[14] wrote that the gens Iulia had received their name Iulius from the family's common ancestor, Aeneas' son Ascanius,[15] who was also known under his cognomen Iulus, which is a derivative of iulus, meaning "wooly worm".[16] Such nicknames were typical for cognomina and were the base of old gentilician names.[17] By tracing their descent from Aeneas, the Iulii belonged to the so-called "Trojan" families of Rome. 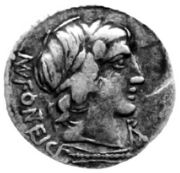 Vediovis[18]
© Teresa Darling (Used by permission)
Weinstock (1971) made a case for Iullus being a diminutive, i.e. juvenescent theophoric name of Iovis, which used to be one of the older names of the god Iuppiter. Weinstock's argument however relies on a hypothetical intermediate form *Iovilus, and he stated himself that Iullus can't originally have been a theophoric name and could therefore only have become one at a secondary stage, after the Julians had established the identification of Iulus as their gentilician god Vediovis (also: Veiovis), who was a "young Iuppiter" himself.[19] Therefore Alföldi (1975) is correct in rejecting this proposed etymological origin.

Members of the Julian family like their chronicler Lucius Caesar later connected the name Iulus with ἰοβόλος ("the good archer") and ἴουλος ("the youth whose first beard is growing").[20] This has however no etymological value and is only a retrofitting interpretation concernced with the earlier institution of the Vediovis-cult in Rome together with a statue of Iulus-Vediovis as a (possibly bearded) archer.[21] Others derived Iulius from king Ilus, who was the founder of Ilium.[22] Weinstock rightfully called these the "usual playful etymologies of no consequence".[23]

In earlier times Caesar could originally have been a praenomen.[24] The suffix –ar was highly unusual for the Latin language, which might imply a non-Latin origin of the name. The etymology of the name Caesar is still unknown and was subject to many interpretations even in antiquity.

Several interpretations were propagated, all of which remain highly doubtful, especially in part due to their derogatory nature:

Julius Caesar himself propagated the derivation from the elephant, an animal that was said to have been called caesai in the "Moorish", i.e. probably Punic language,[31] thereby following the claims of his family that they inherited the cognomen from an ancestor, who had received the name after killing an elephant, possibly during the first Punic War. Since the Gauls came to know the elephant through the Punic commander Hannibal, it is possible that the animal was also known under the name caesar or caesai in Gaul. Caesar used the animal during his conquest of Gaul and probably of Britain,[32] which is further supported by the inclusion of forty elephants on the first day of Caesar's Gallic triumph in Rome.[33] Caesar displayed an elephant above the name CAESAR on his first denarius, which he probably had minted while still in Gallia Cisalpina. Apart from using the elephant as a claim for extraordinary political power in Rome,[34] the coin is an unmasked allusion to this etymology of the name and directly identifies Caesar with the elephant, because the animal treads a Gallic serpent-horn, the carnyx, as a symbolic depiction of Caesar's own victory.[35]

An alternative interpretation of Caesar deriving from the verb caedere ("to cut"; see above) could theoretically have originated in the argument of the Julians for receiving a sodality of the Lupercalia, the luperci Iulii (or Iuliani). Since the praenomen Kaeso (or Caeso) was at first a proprietary name of the Quinctii and the Fabii, possibly derived from their ritual duty of striking with the goat-skin (februis caedere) at the luperci Quinctiales and the luperci Fabiani respectively, the Julians would then have argued that the name Caesar was identical to the Quinctian and Fabian Kaeso.[36] The identification of the cognomina Kaeso and Caesar was indeed supposed by Pliny, but is—according to Alföldi (1975)—unwarranted.[37]

I don't seem to be able to get into either talk page, so I'll have to comment here.

The text above refers to the censorship of Claudius in 312 BC. My understanding is that chronology before 300 BC isn't precise to the nearest year. Is that right? Peter Jackson 16:46, 24 November 2008 (UTC)