The Forest cobra (Naja melanoleuca), also called the black forest cobra and black or white-lipped cobra,[3] is a highly venomous species of cobra in the Elapidae family, native to Africa. It is Africa's largest cobra species and the largest of all the true cobra (Naja) species in the world. It occurs mostly in central and western Africa, preferring lowland forest and moist savanna habitats. It is generally considered to be an aggressive species of cobra and bites are life threatening due to the potency of its venom and the amount of venom it injects per bite.

The forest cobra was first described by American herpetologist Edward Hallowell in 1857. The generic name naja is a Latinisation of the Sanskrit word nāgá (नाग) meaning "cobra". The specific epithet melanoleuca is Greek and means "of black and white". The word melano is Greek for "black", while leuca comes from the Ancient Greek word "leuko" and means "white".[4] 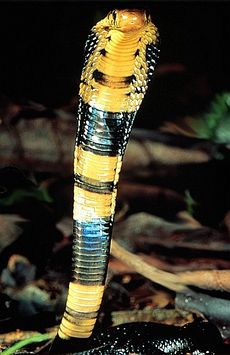 The forest cobra is Africa's largest cobra[5] and the largest of all the true cobra (Naja) species in the world.[6][7] The length of an average adult is 1.4 to 2.2 m (4.6 to 7.2 ft), but they may attain lengths of 2.7 m (8.86 ft),[5][8] and lengths up to 3.1 m (10.17 ft) are also possible in rare cases.[7] The head of this snake is large, broad, flattened and is slightly distinct from the neck. It is a slightly depressed, tapered and moderately thick bodied snake with a slender tail that is medium in length. The body is compressed dorsoventrally and sub-cylindrical posteriorly. The forest cobra has long cervical ribs capable of expansion to form a long, wedge shaped hood when threatened. The canthus is distinct, while the snout is rounded. Its eyes are medium in size with round pupils. The dorsal scales are smooth, very shiny and glossy and are strongly oblique.[3] The colour of this species is variable, with three main colour morphs. Those from the forest or forest fringe, from Sierra Leone east to western Kenya and south to Angola are glossy black, the chin, throat and anterior region of the belly are cream or white, with broad black cross-bars and blotches. The sides of the head are strikingly marked with black and white, giving the impression of vertical black and white bars on the lips. The second colour morph, from the west African savanna, is banded black and yellow, with a black tail, the head is brownish-yellow on top, the lips, chin and throat are yellow. The third colour morph, from the coastal plain of east Africa, south to KwaZulu-Natal, inland to Zambia and soutern Democratic Republic of Congo, is brownish or blackish-brown above, paler below, the belly is yellow or cream, heavily speckled with brown or black, and specimens from the southern part of its range have black tails. Melanistic (all black) specimens have been documented from west Africa.[8][9]

The forest cobra occurs mainly in western Africa and central Africa.[3] It is found all the way from Senegal, Guinea-Bissau, Guinea, southeastern Mali, Sierra Leone, Liberia, Côte d'Ivoire, Burkina Faso, Ghana, Togo, Benin, Nigeria, Equatorial Guinea, Cameroon, and Gabon in western Africa to the Republic of Congo, the Democratic Republic of Congo, Central African Republic, and northern Angola in central Africa to western Kenya, Uganda, Rwanda, and Burundi in eastern Africa, and to fragmented parts of southern Africa including the Natal.[9]

The forest cobras are snakes that are well adapted to many environments and the habitat of the forest cobra is strongly dependent on what part of its African range the snake originates from. Forest cobras originating in the southern African regions are typically found in savanna and grassland, but they can also be found in broken rock country. They are mainly found in the tropical and subtropical rainforest regions of west and central Africa.[10] It also inhabits mangroves in western Africa. The banded form of forest cobra in west Africa lives in savanna and grassland (but usually along streams) and well vegetated areas, especially riverine forest, up to latitude 14 N. Most forest cobras' preferred habitat are lowland forest and moist savanna where it favours coastal thickets.[9] It is a snake of forest and woodland. It is the only one of Africa's cobras that will live in high forest. However, it seems to be highly adaptable and will readily move into drier areas if it can. In western Kenya, the forest cobra has been found in wide stretched grassland areas. The population of forest cobras in Uganda are almost always found close to water. The brown colour phase occurs in coastal and high altitude forest, woodland and thicket, and grassland areas (i.e. Nyanga, Zimbabwe). Due to its secretive habits, and fondness for living in holes, it often persists in quite well-inhabited areas, common in and around many central African towns, even long after most vegetation has gone. They are also found on fruit plantations where they live in the trees. Occurs through a wide altitude range, from sea-level to forested mountains at 2800 m (9186.35 ft) above sea-level.[8]

The forest cobra is an agile, diurnal species that climbs well and is one of the most aquatic of the true cobras of the genus Naja.[5] It is terrestrial, but it is a fast, graceful climber, known to ascend trees to a height of 10 m (32.81 ft) or more. It is quick moving and alert. It swims well and readily takes to the water, in some areas its main diet is fish and could be regarded as semi-aquatic. Although it is a diurnal species active mostly during the day in uninhabited areas, it can also be active by night where it goes into urban areas. When not active, it takes cover in holes, brush piles, hollow logs, among root clusters or in rock crevices, or in abandoned termite mounds at forest fringe or clearings. In certain areas it is fond of hiding along river banks, in overhanging root systems or bird holes, and in urban areas will hide in junk piles or unused buildings. When angry it rears up to a considerable height and spreads a long, narrow hood. It can strike quickly, to quite a long distance, and if molested and cornered it will rush forward and make a determined effort to bite. Some authorities believe that it is one of the most dangerous African snake to keep, due to its willingness to try to bite, and it has been described as aggressive.[8] Some snakes are reputed to be actively aggressive and may attack with little or no provocation. Of the African elapids, the forest cobra and the black mamba have this characteristic of being particularly aggressive.[11] This species is not able to "spit" its venom.[9]

Forest cobras will feed on a wide variety of prey,[3] including amphibians, fish, other snakes, monitor lizards, and other lizards, birds' eggs, rodents, and other small mammals. It has been recorded taking mudskippers and in west Africa one specimen had eaten a Gifford's giant shrew, an insectivore with a smell so noxious that most other snakes would not touch it.[8]

This is an oviparous species.[5] Females will lay between 11 and 26 smooth white eggs (egg size roughly 30 X 60 mm) in the summer. The eggs stick together in a bunch.[9] The eggs are laid in hollow trees, termite mounds, holes in the ground or females will make their own nests. Before mating, a pair of will "dance", raising their heads a foot or more off the ground and moving to and fro. This may continue for an hour before mating takes place, when the male presses his cloaca (the chamber into which the reproductive, urinary, and intestinal canals empty) against that of the female. Female forest cobras may stand guard and are irritable and aggressive during the breeding period. A female is liable to attack without provocation, with potentially fatal consequences for passers-by if her nest is near a footpath.[7] Hatchlings are born completely independent and are usually 27 to 40 cm (11 to 16 in) in length.[9] Incubation period is anywhere from 55 to 70 days (or over 80 days in one captive study[12]) at temperatures of 27-30°C (81-86°F).[13] These snakes are known to have a long lifespan. One captive specimen lived for 28 years, which is the record for the longest lived venomous snake in captivity.[8]

The venom of this cobra is a postsynaptic neurotoxin and bites result in severe neurotoxicity.[14] The species has an intraperitoneal LD50 value of 0.32 mg/kg, while the intravenous LD50 value is 0.29 mg/kg.[15] The high average venom yield per bite is around 500 mg (wet). This snake is highly dangerous due to the amount of venom it can inject in a single bite and its aggressive nature and willingness to bite.[8] Death can occur rapidly, within 30 to 120 minutes in severe cases of envenomation. Signs and symptoms of envenomation include ptosis, drowsiness, limb paralysis, hearing loss, inability to speak, dizziness, ataxia, shock, hypotension, abdominal pain, fever, pallor, and other neurological and respiratory symptoms.[14]

The forest cobra is one of the least frequent causes of snake bite among the African cobras, largely due its forest-dwelling habits. Although the largest of the African cobras (genus Naja), the venom is not the most toxic among the Naja species of Africa. The Cape cobra for example has a more toxic venom, but it does not inject anywhere near the amount of venom that the forest cobra does. It is possible for a forest cobra to deliver more than one bite in a single attack, delivering up to 500 mg of venom each time. Clinical experience with this species has been very sparse, and few recorded bites have been documented. Deaths from respiratory failure due to severe neurotoxicity have been reported, but most victims will survive if prompt administration of antivenom is undertaken as soon as clinical signs of envenomation have been noted. Rare cases of spontaneous recoveries without the use of specific antivenom have also been seen, however neglecting the use of antivenom places the patient at increased risk for major morbidity and mortality. If the snake becomes cornered or is agitated, it can quickly attack the aggressor, and because a large amount of venom is injected, a rapidly fatal outcome is possible. The mortality rate of an untreated bite is not exactly known but it is thought to be quite high. The forest cobra does not spit or spray its venom. It is also felt by many herpetologists to be one of the most intelligent of the African elapids.[14]