From Citizendium
(Redirected from Earth Sciences)
Jump to: navigation, search

This article is about Earth science. For other uses of the term Earth, please see Earth (disambiguation). 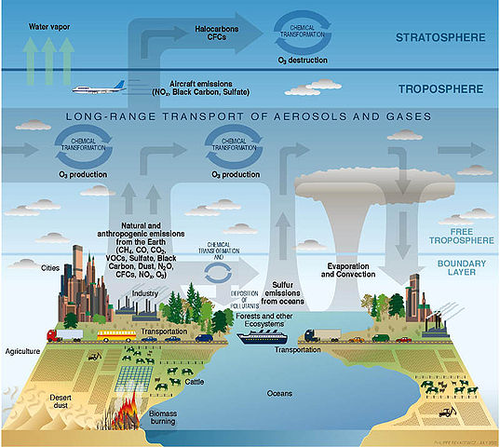 Earth science, or geoscience, is primarily the study of planet Earth. More specifically, 'Earth sciences' refers to those sciences that deal with the study of the Earth, its components and processes. Earth science includes those fields that study the firmament (the lithosphere or ground that makes up the land and the ocean floor), the waters (the hydrosphere, which includes the oceans, the seas, rivers, lakes and so forth), and the atmosphere itself, the air around us. The study of other planet's atmospheres and lithospheres is often considered part of the Earth sciences, especially in the case of terrestrial planets. As a consequence, the Earth sciences have a strong multidisciplinary character.

Earth science also can encompass and is related to those disciplines that study the same topics on extra-terrestrial bodies such as the moon, the planets and asteroids.

There are three main ‘spheres’ of study in the earth sciences:

corresponding, respectively, to the gas, the solid ground, and the water of the earth.

There are other ‘spheres’ but these are subdivisions of the main ones. The pedosphere (Greek pedon or ‘soil’) refers to the outer layer of the lithosphere. It interacts directly with the atmosphere and the hydrosphere. The cryosphere (Greek root kryos, frost or ice) is the glacial layer, its study is called glaciology.[1]

There are a large number of subdisciplines and related disciplines that involve overlapping fields of study[2]. A perusal of university majors and journal topics demonstrates a fundamental characteristic of earth science: Although the geosciences are basically about the non-living aspects of the earth,[3] the interaction non-living and living organisms, past and present, is also a very large area of study within earth sciences.

As the study of the geology of other planets and extraterrestrial materials, it is concerned with the geology (the surface as well as interior processes) of all solid bodies in the solar system, including the major planets and their satellites, asteroids, comets, and meteorites.[4][5] Astrogeology is synonymous with ‘exogeology’ and ‘planetary geology.’ Astrogeology utilises geological studies on Earth and incorporates remote sensing of planetary bodies (e.g. telescopy) to study such geological process as volcanism, floods, cratering, tectonics, and sand movement.[6]

A field within geography that studies patterns and processes of the hydrosphere, biosphere, atmosphere, and lithosphere to understand the physical topography and weather and the global patterns of life on Earth[7]. An inter-related discipline, it draws upon geology, ecology, and climatology particularly with regard to the study of the impact of weathering and erosion. Physical geography is usually contrasted with and complemented by its sister science human geography.

Paleogeography is the study of the earth’s surface in the distant past. “The study of paleogeography has two principle goals. The first goal is to map the past positions of the continents. The second goal is to illustrate the changing distribution of mountains, lowlands, shallow seas, and deep ocean basins through time.” [8]

Paleogeology is the study of geologic conditions in the past that are manifest in the features of subterranean layers. Both employ analyses of long cylinders of bored rock or cores drilled from the earth that are charted and subjected to analytic comparisons.[9]

By reconstructing the positional drift of masses of bedrock, geologists have been able to determine that the Earth's magnetic field has reversed polarity several times in the last 3 billion years.

The study of the earth’s oceans.

The branch of hydrology that pertains to the study of fresh water bodies: lakes, ponds, and streams, reservoirs, rivers, wetlands, and groundwater. Limnology also encompasses salt water in-land lakes. Limnology is derived from the Greek word limne - 'marsh' or 'pond' and the Latin limnaea – 'thing pertaining to a marsh'.

Integrating physical, chemical, and biological components, limnology studies the biogeochemical changes of standing (lentic) water ecosystems: their interactions within and water movement through drainage basins and their exchanges with the atmosphere. Inland water ecosystems are an integral component of a system that encompasses drainage area and atmosphere, running (lotic) waters and ground waters, chemical changes and interactions that occur en route, and includes components of the land being transported to the water.[10]

The interdisciplinary study of the movement, characteristics and distribution of water, surface-water (fresh water and salt water), groundwater, and water-quality [11][12] 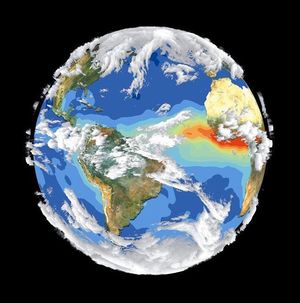 Meteorology is the scientific study of the atmosphere and atmospheric processes[13] including: weather studies and weather forecasting; studies of the related oceanic and hydrological sciences; and studies of air quality and the atmospheric dispersion of air pollution.[14]

The study of the climate - the long-term patterns in the weather and changes therein.

Paleoclimatology[15] is the study of ancient climates. Different types of rock and minerals form under specific climatic conditions: wet and dry, warm and cool. This is also true of ancient life forms whose presence may be determined from the fossil record. As the earth’s surface changes climatically and continents move tectonically, the amount of sunlight will vary and effect conditions on the surface, leading to changes that then become buried in the strata. Coal deposits develop under wet conditions, bauxite deposits are evident where it was warm and wet, evaporites and calcretes occur under warm and dry conditions, and tillites where it was wet and cool. The ancient distribution of different rock types provide evidence of how the global climate has changed through time and how the continents have travelled across climatic belts. [8]

the study of archeological questions with the use of geographic and geologic methods. Geoarcheology focuses in particular on the reconstruction of (pre-)historic landscapes and the origins of raw materials.

Studies microbes and their interactions in geologic systems

Paleobiogeography studies microbial fossils and their interactions in geologic systems. The distribution of plants and animals in the ancient past helps reveal the latitudinal and relative position of the continents. Ancient plant organisms reflect temperature and rainfall in the distant past. The similarity or dissimilarity of life on different continents can be used to estimate their geographic proximity and may reveal when these continents were connected or isolated from each other. [8]

the study of ancient plant life. Paleontology may be divided further into vertebrate, invertebrate and micropaleontology

the study of ancient environments.

the study of ancient life forms.

This field involves the identification of fossils and their position relative to their occurrences in space and time. Fossil groups are confined to specific sedimentary layers that reflect changes in the earth’s environment. Fossils only occur in the lithosphere having been formed in the terrestrial (land), freshwater and marine (sea) environments. Biostratigraphy employs fossils of larger animals but the predominant area of study concerns microfossils such as foraminifera, calcareous nannofossils, and palynomorphs. Microfossils are also used in paleoclimatology, biogeography, and studies of thermal maturation.

Biostratigraphy can also be employed to ascertain ancient land forms in that seismic and tectonic activity may have shifted large areas of deposited materials and corresponding layers lying at varying depths may show specific fossils known to have been deposited at the same time. By correlating these fossil depositions, strata that appear to be deposited at different times may be shown to have been formed at the same time and then later shifted through gradual or sudden changes. An example would be the fossils found in mountain ranges that may also occur in adjacent lower lying plains. Biostratigraphical studies can then be used to show that the mountains originally were contiguous with the plains and later thrust upward by tectonic activity. [16][17]

The science of the study of contemporary and fossil palynomorphs as well as associated particulate organic matter (POM) in sedimentary strata. Palynology is an interdisciplinary field overlapping with geological and biological sciences. Palynomorphs are microscopic, decay-resistant remains of certain plants and animals.

Palynomorphs are used to establish relative dating for strata, for the study of ancient climates, and for determining the possible presence of petroleum or gas [18][17][16]

Stratigraphical palynology involves identification, distribution, and abundance of palynomorphs to correlate the sequence of sedimentary depositions in time and place, and to provide chronological references for these sequences. Stratigraphic palynology is applied to sediments of all ages. It is considered a subdiscipline or inter-disciplinary field of biostratigraphy, micropalaeontology, paleobotany, paleopalynology. [18][17]