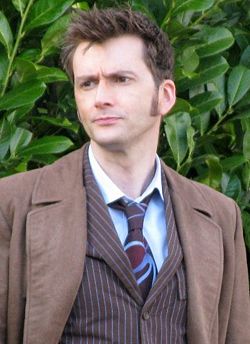 (CC) Photo: Alun Vega
David Tennant on location filming some of his final scenes as the Doctor, a role he played from 2005 to 2010.

David Tennant (born 18th April, 1971) is a Scottish actor well-known for various roles in television, theatre and film. In 2005, he became the tenth actor to take on the lead role in the television series Doctor Who, portraying 'the Doctor' with an Estuary English accent. In 2008, Tennant announced his departure from the role after three series and several special episodes, handing over to Matt Smith in an episode broadcast on New Year's Day, 2010. He is reappearing as the fourteenth Doctor, between Jodie Whittaker and Ncuti Gatwa.

In film, Tennant's biggest role to date has been as 'Barty Crouch Jr' in Harry Potter and the Goblet of Fire (2005). Other appearances include the title role in the BBC's Casanova (2005), and many theatrical performances, notably as the lead in the Royal Shakespeare Company's 2009 production of Hamlet, for which he received critical acclaim despite sustaining a back injury which limited his involvement. In 2013, he played the title role in an RSC production of Richard II, as well as reprising his role as the Doctor for the 50th anniversary special episode of Doctor Who.