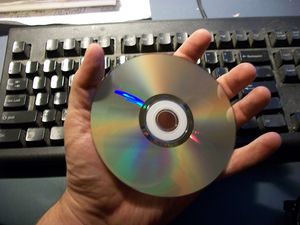 A DVD can fit in the palm of a person's hand.

DVD is an optical disc storage technology which can hold video, audio, and computer data.[1] It is like a CD but can hold much more digital information.[1] The technology replaced laserdisc, videotape, video game cartridges, and CD-ROM applications and enjoys wide support among major electronics firms and computer makers as well as movie and music studios.[1] It was launched in 1997; by 2007, according to one estimate, there were over a billion DVD playback devices including DVD players, personal computers, and game consoles.[1]

Officially the letters DVD signify nothing, although there have been many proposals about what the letters were intended to mean; one popular version is Digital video disc and another is Digital versatile disc.[2] An international forum in 1999 decreed that "DVD, as an international standard, is simply three letters" although there were reports that Toshiba continues to support the "digital video disc" acronym.[2]

The physical disks are round, shiny, silver colored, and easily scratched, and are inserted into a computer player with a spinning motor which has an optical disk reader which reads information stored on the disk with a red-colored[3] laser while it spins inside the computer. The format was invented by Sony and Philips in 1995.[4]

There are different formats:

The DVD video format was first introduced by Toshiba in Japan in November 1996 and in the United States in March 1997,[5] in Europe in 1998, and Australia in 1999. In May 1997 the two firms released many DVD technical specifications to all companies[5] and published them as DVD Books, such as the DVD-ROM Book, DVD-Audio Book, DVD-Video Book, DVD-R Book, DVD-RW Book, DVD-RAM Book, DVD-AR Book, DVD-VR Book, and so forth. Many specifications for mechanical, physical and optical characteristics are freely available standards from the ISO website.[6] Also, the DVD+RW Alliance publishes competing DVD specifications such as DVD+R, DVD+R DL, DVD+RW. These DVD formats are also ISO standards.[7][8][9][10]

Some DVD specifications are not publicly available and can be obtained only from the DVD Format/Logo Licensing Corporation for a fee of $5000 (USD).[11][12] Every subscriber must sign a non-disclosure agreement as certain information in the DVD Book is proprietary and confidential.[11]

When playing a DVD, if the picture skips or there are video problems, it's possible that some dirt or grime got on the surface of the DVD; it's possible to gently clean a DVD by soaking a washcloth with alcohol -- even mouthwash will work -- and wiping it gently to dissolve fingerprints.[13] Be careful not to scratch the disk's surface; a deep cut or tear will probably render the DVD unusable, but there are reports that minor scratches can be fixed with a repair kit.

The basic types of DVD (12 cm diameter, single-sided or homogenous double-sided) are referred to by a rough approximation of their capacity in gigabytes. In draft versions of the specification, DVD-5 indeed held five gigabytes, but some parameters were changed later on as explained above, so the capacity decreased. Other DVD formats, those with 8 cm diameter and hybrid variants, acquired similar numeric names with even larger deviation.

Each DVD sector contains 2,418 bytes of data, 2,048 bytes of which are user data. There is a small difference in storage space between + and - (hyphen) formats: 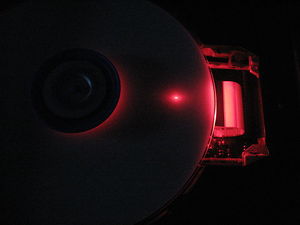 DVD uses 650 nm wavelength laser diode light as opposed to 780 nm for CD. This permits a smaller pit to be etched on the media surface compared to CDs (0.74 µm for DVD versus 1.6 µm for CD), allowing for a DVD's increased storage capacity. In comparison, Blu-ray, the successor to the DVD format, uses a wavelength of 405 nm, and one dual-layer disk has a 50 GB storage capacity.

HP initially developed recordable DVD media from the need to store data for backup and transport.

Dual-layer recording (sometimes also known as double-layer recording) allows DVD-R and DVD+R disks to store significantly more data—up to 8.54 gigabytes per disk, compared with 4.7 gigabytes for single-layer discs. Along with this, DVD-DL's have slower write speeds as compared to ordinary DVD's and when played on a DVD player, a slight transition can be seen between the layers. DVD-R DL was developed for the DVD Forum by Pioneer Corporation; DVD+R DL was developed for the DVD+RW Alliance by Philips and Mitsubishi Kagaku Media (MKM).[18]

A dual-layer disk differs from its usual DVD counterpart by employing a second physical layer within the disk itself. The drive with dual-layer capability accesses the second layer by shining the laser through the first semitransparent layer. In some DVD players, the layer change can exhibit a noticeable pause, up to several seconds.[19] This caused some viewers to worry that their dual-layer disks were damaged or defective, with the end result that studios began listing a standard message explaining the dual-layer pausing effect on all dual-layer disk packaging.

DVD recordable disks supporting this technology are backward-compatible with some existing DVD players and DVD-ROM drives.[18] Many current DVD recorders support dual-layer technology, and the price is now comparable to that of single-layer drives, although the blank media remain more expensive. The recording speeds reached by dual-layer media are still well below those of single-layer media.

There are two modes for dual-layer orientation. With Parallel Track Path (PTP), used on DVD-ROM, both layers start at the inside diameter (ID) and end at the outside diameter (OD) with the lead-out. With Opposite Track Path, used on many DVD Video disks, the lower layer starts at the ID and the upper layer starts at the OD, where the other layer ends; they share one lead-in and one lead-out. However, some DVD Video disks also use a parallel track, such as those authored episodically, as in a disk with several separate episodes of a TV series—where more often than not, the layer change is in-between titles and therefore would not need to be authored in the opposite track path fashion.

DVD Video is a standard for content on DVD media. The format went on sale in Japan in November 1996, in the United States in March 1997, in Europe in October 1998 and in Australia in February 1999.[20] By June 2003, weekly DVD Video rentals began outnumbering weekly VHS cassette rentals, reflecting the rapid adoption rate of the technology in the U.S. marketplace.[21] Currently, DVD Video is the dominant form of home video distribution worldwide.

Although many resolutions and formats are supported, most consumer DVD Video disks use either 4:3 or anamorphic 16:9 aspect ratio MPEG-2 video, stored at a resolution of 720/704×480 NTSC or 720/704×576 PAL at 29.97, 25, or 23.976 framerate. Audio is commonly stored using the Dolby Digital AC-3 or Digital Theater System formats, ranging from 16-bits/48 kHz to 24-bits/96 kHz format with monaural to 6.1-channel "Surround Sound" presentation, and/or MPEG-1 Layer 2 and/or LPCM Stereophonic. Although the specifications for video and audio requirements vary by global region and television system, many DVD players support all possible formats. DVD Video also supports features such as menus, selectable subtitles, multiple camera angles, and multiple audio tracks. Double dvds writers are faster and more convienent.

Commercial video DVDs are encrypted with the Contents Scrambling System or CSS. This has been broken. The CSS is a digital rights management or DRM scheme used on commercial DVDs which uses a 40-bit stream cipher algorithm which was initially introduced around 1996. It was reverse engineered in 1999. One source suggests the 1996 encoding scheme was susceptible to a brute force attack because export regulations of the United States discouraged cryptosystems which had more than 40 keys. Since then, new codes have been used to encrypt DVDs such as the Cryptomeria cipher.

DVD Audio is a format for delivering high fidelity audio content on a DVD. It offers many channel configuration options (from mono to 5.1 surround sound) at various sampling frequencies up to 24-bits/192 kHz versus Compact disk Digital Audio's 16-bits/44.1 kHz. Compared with the CD format, the much higher-capacity DVD format enables the inclusion of considerably more music (with respect to total running time and quantity of songs) and/or far higher audio quality reflected by higher sampling rates and greater sample resolution, and additional channels for spatial sound reproduction. 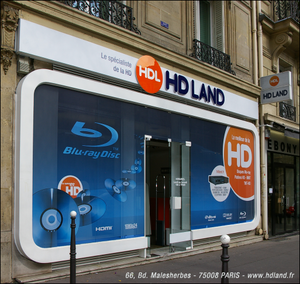 In 2006, a new format called Blu-ray, designed by Sony, Samsung, and Panasonic, was released as the successor to DVD. Another format, HD DVD, competed unsuccessfully with this format in the format war of 2006–08. In the battle between blu-ray and HD DVD battled for supremacy, there were indications that the battling was counter-productive for the industry as a whole; one analyst commented: {{quote|There is an awful lot of people in the US and Europe who have HD displays and no hi-def content. That's a wasted opportunity at this point. The industry is not exploiting that opportunity.[22]

A dual layer Blu-ray disk can store 50 to 100 GB.[23][24][22] In March 2008, a new format was introducted called "HD VMD[25] In March 2010, it appears that the blu-ray format "has the floor largely to itself as the heir apparent to the DVD", but that the format's prominence was in jeopardy because of the possibility of consumers downloading content directly from the web to their TVs.[26] There were some indications that sales of blu-ray players were increasing as prices were dropping.[26] Blu-ray disks played on a good high-definition television made "a real difference" and gave a crisp, clear picture.[26] Another option is that some films will be offered in three-dimensional blu-ray format, such as the film Avatar directed by James Cameron.[27] In the sluggish economy from 2008–2010, sales of DVDs, including rentals of DVDs, have been lackluster, leading to layoffs at firms such as Sony.[28]