CMV is a virus which can produce congenital[4] and acquired infection, and has therefore become an important pathogen of study. Learning about it, its phylogenetic history, and its genome gives us a greater understanding of the organism and can lead to the development of a working drug against this ubiquitous virus. [2] Human Cytomegalovirus strains were isolated by three independent scientists: Smith and Rowe in 1956 and Weller in 1957. It is named for the cytomegalic, or enlarged cells, that are characteristic of this virus. [3] CMV is species specific and there are strains which affect humans, monkeys, and rodents. Human CMV can be found in almost all of the body's organs. It can also be found in body fluids, including semen, saliva, urine, feces, breast milk, blood, and secretions of the cervix. In pregnant women, CMV is also able to cross the placenta [5]. Therefore, infection in a pregnant woman can lead to infection of the developing fetus. [4]

CMV has a double stranded linear DNA genome [6]. It is more the 240 kilobase pairs [7]long making it the largest member of the herpesvirus family. It is capable of encoding more than 200 potential protein products, but the function of most of these proteins is presently unknown. There are many strains of CMV, each affecting different organisms. Different strains have slightly different genomes, but all strains share about 80% of the genome. [5] CMV has a class E genome. This genome contains two unique sequences, a long unique sequence and a short unique sequence. These two sequences can invert resulting in four isomers [8] of the viral DNA. [6]

CMV is structurally similar to other herpesviruses in that it has an icosahedral [9] capsid [10]surrounding and protecting the genetic material. The icosahedral shape is composed of 20 equilateral triangle faces, shaped into a sphere. This capsid is made out of 162 hexagonal protein capsomeres [11], and is surrounded by a lipid bilayer [12]outer enevelope. [7] On the outer envelope there are many molecules especially involved in host immunity, such as glycoproteins [13]. In between the outer envelope and the capsid is the viral tegument. This is a proteinaceous layer which contains proteins involved in immunity. 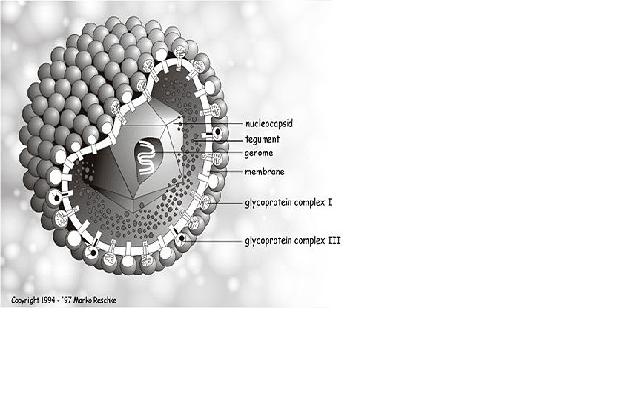 CMV is a virus which affects many species including humans, monkeys, and rodents, and can be found in almost all organs of the host. It has become a very efficient virus because it has evolved mechanisms to remain undetected in its environment. For example, the human cytomegalovirus has three genes which allow it to evade human immunity [14]. It has the US3 gene whose products prevent the major histocompatibility complex [15] molecules from moving to the membrane. The US6 gene products inhibits peptide translocation of proteins involved with antigen [16] presentation. The US11 gene products move the class I heavy chain of the antigen from the endoplasmic reticulum to the cytosol, making it nonfunctional. [8]All these three genes interfere with antigen presentation in infected cells. If an infected cell can't present an antigen, then the body does not know that it is infected, and will not provide immunity against the virus. In this way, CMV can evade host immunity and survive for long periods of time. These genes are important when developing a vaccine for CMV.

CMV is an enveloped [17] double stranded DNA virus. On this envelope, there are molecules called glycoproteins. These molecules, especailly glycoprotein B are determinants of humoral immunity [18], meaning they can cause a humoral immune response. Proteins in the viral tegument, the proteinaceous layer between the capsid and the envelope, elicit cellular responses [19] to CMV. Specifically the abundant molecule phosphoprotein 65 is the molecule targeted by cytoxic T cells in the cellular response. Although the host has the ability to defend itself against a CMV invasion, CMV has the ability to evade the host immunity, and in this way, it can cause infection in the host. CMV has genes that interfere with the antigen presentation of infected cells, thus limiting the immune response to it. Therefore, it can remain alive for a long time in a host. There are three manifestations of CMV disease in humans [9]. The first is acute acquired CMV. This is when a healthy person becomes infected with CMV. Often the person will present no symptoms. If symptoms are present, they are similar to those of mononucleosis, and include fever, fatigue, and muscle pain. These symptoms can last up to three weeks. After this initial infection, the virus has the ability to remain dormant in the host. The second type of CMV disease occurs after this initial infection, and is a reactivation of the latent CMV. If a person becomes immunocompromised, for example someone with HIV, someone who received an organ or bone marrow transplant [20], or even someone under a lot of stress, the virus can flare up again. If this occurs, the symptoms can be more serious and include pneumonia [21] , hepatitis [22], encephalitis [23], myelitis [24], colitis [25], retinitis (inflamation of the retina), and neuropathy [26] . The third type of CMV disease is congenital or perinatal CMV. This is when a woman who is infected with CMV (even if she doesn't have any symptoms) passes it to her child. In congenital CMV, a pregnant woman passes the disease through the placenta to the fetus. In perinatal CMV, a mother passes CMV to her child through nursing. Severity ranges from a simple fever of unknown origin, to enlarged liver and/or spleen, and even motor/mental retardation. The spread of the virus is not associated with food or water. It is generally spread through close contact with bodily fluids of an infected person. [10] When the host is infected, CMV DNA can be detected with polymerase chain reaction (PCR)[27] in all the different cell lineages and organ systems in the body. Upon initial infection, CMV infects the epithelial cells [28]of the salivary gland [29], resulting in a persistent infection and viral shedding [30].[11]

There are several laboratory methods which can be used to diagnose CMV. First, the virus must be isolated from a fluid sample such as blood or urine. DEAFF or Detection of early antigen fluorescent foci is a method used for the early diagnosis of CMV infection. The specimen is inoculated into a cell culture. This is examined 24 hours later by immunofluorescence for CMV encoded proteins. Histopathology- Cells infected with CMV are enlarged and have inclusion bodies which can be recognized from biopsy material. It is known as an having an "owl's eye" appearance. 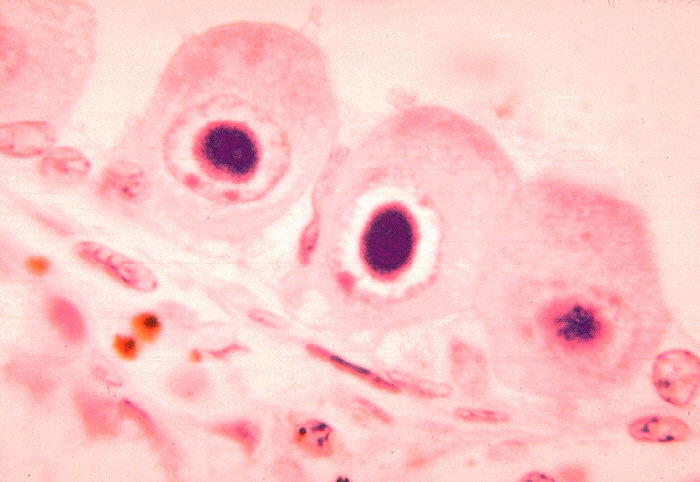 Tissue immunofluorescence - Infected lung and liver cells may be stained by specific anti-CMV antibodies. CMV can also be detected using PCR, which is rapid and sensitive. But, because of its sensitivity, it often detects latent CMV which is present in many individuals. [12]

In generally healthy individuals who are infected with CMV, no treatment is necessary. If a newborn or immunocompromised patient is infected, or someone has more serious symptoms, antiviral intravenous drugs may be used. Some drugs include cidofovir [[31]], ganciclovir [[32]]and foscarnet [[33]]. However, this is not a cure for CMV. It simply slows down the replication of the virus, and may help in preventing and treating some symptoms.[13] Intravenous immunoglobulins may be used for treatment[14][15]; however, it is not clear that either standard immuneglobulin or hyperimmune globulin are effective.[16] Intravenous immunoglobulins may be combined with antiviral drugs.[17][15]

Currently, there is no vaccine for CMV, but preventative measures can be taken to keep from getting the virus. The best way to prevent from becoming infected with CMV is frequent hand washing, avoiding sharing drinking glasses, and avoiding contact with bodily fluid, especially of young children. [18] Antiviral drugs may help prevent infection in immunocompromised patients.[19] Intravenous immunoglobulins may be used for prevention in transplantation patients.[20]

1. "Targeted Deletion of Regions Rich in Immune-Evasive Genes From the Cytomegalovirus Genome as a Novel Vaccine Strategy"[21] This experiment was designed as an attempt to construct a working vaccine for CMV. Presently, there is no vaccine for CMV and this can become a problem especially for pregnant and nursing women, and for immunocompromised people. The strategy that was used here was to delete certain genes from the CMV. The CMV has certain genes that give the virus the ability to evade the host's immune system. They do this by interrupting the processing and presentation of antigens on the surface of infected cells. Without antigens on infected cells, the body doesn't know that the cell is infected, and does not build up immunity to the virus. The virus therefore has the ability to survive in a host, without causing an immune response. In this experiment, researchers deleted the genes that allow CMV to evade host immunity, from mouse CMV. Without the genes, the CMV would not have the ability to interrupt antigen presentation, and with antigens present, the immune system will recognize infected cells and be able to fight them. By doing this, the body would be building up immunity to a non pathogenic version of the virus, so in case he gets infected with the actual wild type virus, he will already have immunity to the virus. Researchers used mouse CMV, and using Bacterial Artificial Chromosome technology, they removed the genes involved in evading host immunity (in mice that is genes m04, m06, m152, m144, m145, m155, and m157, which are located at the ends of the genome.) Researchers first tested its virulence because they wanted to make sure that these mutant CMV's would not be dangerous. They injected them into mice and saw that the mice were not affected by it (i.e. there was no weight loss). They also want to test to see if the mutant CMV has the ability, like wild type CMV to remain dormant and then reactivate. So researchers injected mice with mutant CMV and then killed their immune system with gamma radiation. They saw that even with weak immune systems, the mutant virus did not reactivate. To test the immune response to the mutant CMV, researchers measured CD8 responses, and to measure protective immunity, they immunized mice with mutant CMV and then introduced wild type CMV. They saw that the immunity that they had build towards mutant CMV was useful in fighting off wild type CMV infection.

2. "Development and Preclinical Evaluation of an Alphavirus Replicon Particle Vaccine for Cytomegalovirus" [22]The research documented in this article also deals with developing a working vaccine for CMV, but it takes a different approach. In this experiment, researchers wanted to construct a cell, which would not be pathogenic, but which would cause an CMV immune response. They did this by constructing a plasmid with CMV genes that cause immune response in the host. So, since glycoprotein B and phosphoprotein 65 are molecules in CMV that cause an immune response in the host, researchers constructed two plasmids, one with the gene for gB and the other with the gene for pp65. They injected these plasmids into cells via electroporation, making virus like replicon particles. The VRP's were then injected into mice to see if they caused an immune response. One group of mice was injected with gB VRP and the other with pp65 VRP. After the injections researchers found that mice immunized with gB VRP developed anti gB antibodies, which indicates a humoral immune response. They also saw that mice immunized with pp65 VRP developed robust T cells indicating a cellular immune response to the VRP.