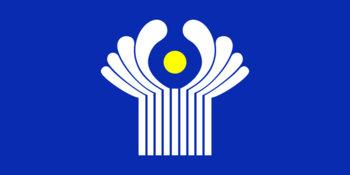 Current Flag of the CIS.

The Commonwealth of Independent States (CIS) (Russian: Содружество Независимых Государств (СНГ), transliterated Sodruzhestvo Nezavisimykh Gosudarstv (SNG)) is a regional organization whose participating countries are former Soviet Republics. The organization was founded on December 8, 1991 by Belarus, Russia, and Ukraine, when the leaders of the three countries signed an agreement on the dissolution of the Soviet Union and the creation of CIS as a successor entity to the USSR. On December 21, 1991, the leaders of eight additional former Soviet Republics – Armenia, Azerbaijan, Kazakhstan, Kyrgyzstan, Moldova, Turkmenistan, Tajikistan, and Uzbekistan – joined the Creation Agreement, thus bringing the number of participating countries to 11. Georgia joined two years later, in December 1993. As of that time, CIS included 12 of the 15 former Soviet Republics. The three Baltic states – Estonia, Latvia, and Lithuania – had decided not to join, seeking strategic affiliation with the European Union.

The Creation Agreement (Russian: Соглашение, Soglasheniye) remained the main constituent document of the CIS until January 1993, when the CIS Charter (Russian: Устав, Ustav) was adopted. The charter introduced the concept of membership: a member country is a country that ratified the CIS Charter (sec. 2, art. 7). Ukraine, one of the three founding countries that signed and ratified the Creation Agreement in December 1991, has never ratified the CIS Charter and it is thus legally not a member country to this day. Turkmenistan changed its CIS standing to associate member as of August 26, 2005 from considerations of consistency with its UN-recognized international neutrality status. Georgia notified (on August 18, 2008) the CIS executive organs of the unanimous decision of its parliament to leave the regional organization, and according to the CIS Charter (sec. 1, art. 9) this decision will come into force 12 months after the notification date. Thus, as of September 2008, the 12 countries that form the CIS differ in their membership status: 9 countries have ratified the CIS charter and are full CIS members, one country (Turkmenistan) is an associate member, one country (Georgia) has declared its decision to leave the CIS, and one country (Ukraine) is a founding and participating country, but legally not a member country.

The CIS is not a superstate, and it is comparable to a loose confederation similar to the original European Community rather than today’s European Union. Although the CIS has few supranational powers, it is more than a purely symbolic organization, possessing coordinating powers in the realm of trade, finance, lawmaking, and security. The most significant issue for the CIS is the establishment of a full-fledged free trade zone or economic union between the participating states, to have been launched in 2005. It has also promoted cooperation on democratization and cross-border crime prevention. As a regional organization, CIS participates in UN peacekeeping forces.