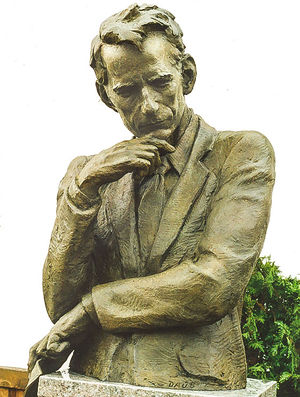 Life-sized bust of Claude Shannon by sculptor Eugene Daub. At least six versions of this statue are on display at various institutions in the USA. Eugene Daub described Claude Shannon as "the most famous person most people have never heard of" and admitted that he was quite fond of this particular work.

Claude Shannon (1916-2001) was a theoretical mathematician and electrical engineer who is regarded as a key foundational researcher in computer and communications design. He has also frequently been referred to as "the father of information theory". Shannon studied at M.I.T., worked for a time at Bell Laboratories, and later returned to M.I.T. as a professor. Recognized as a premier voice in the engineering community from the 1940's onward, Shannon had become a figure of some public and popular acclaim by the time of his retirement. An enormous number of resources exist about him on the web, and also in the deep web (i.e., online resources which must be paid for). In his twilight years, Shannon suffered from Alzheimer's disease.

Shannon made a critical step enabling hardware design of a computer in his 1938 MIT master's thesis, A symbolic analysis of relay and switching circuits[1], in which he associated boolean algebra, a kind of mathematical system that had been known for centuries, with the design of logic gates in digital hardware. Shannon called boolean algebra "switching algebra" in the context of digital hardware design.

The field of information theory was launched in 1948 by Shannon's ground-breaking, two-part paper "A Mathematical Theory of Communication" [2] It was shortly followed by a book [1] which has since been reprinted many times. Information theory is devoted to messages and signals using techniques drawn from mathematical probability, and linking discrete and continuous mathematics in ways that later turned out to be helpful, not just in the fields of communications and computers, but also on thinking about biological processes and linguistics. He was also a pioneer in developing methods for computers to play chess.

During World War II, Shannon performed classified research for the U. S. government on cryptography. His 1949 "Communication Theory of Secrecy Systems"[3] became the seminal paper for cryptography as an academic discipline.

This list is not complete, but it includes his most influential works. Papers are shown in order of appearance: