A Boolean algebra is a form of logical calculus with two binary operations AND (multiplication, •) and OR (addition, +) and one unary operation NOT (negation, ~) that reverses the truth value of any statement. Boolean algebra can be used to analyze computer chips and switching circuits, as well as logical propositions.

Boolean algebra is not a portion of elementary algebra as taught in secondary schools, and is only a facet of algebra, the general mathematical discipline treating variables, symbols and sets.

Boolean algebra was introduced in 1854 by George Boole in his book An Investigation of the Laws of Thought.[2] This algebra was shown in 1938 by Claude Shannon to be useful in the design of logic circuits.[3]

The operations of a Boolean algebra, namely, two binary operations on a set A, named AND (multiplication, •) and OR (addition, +), and one unary operation NOT (negation, ~), are supplemented by two distinguished elements, namely 0 (called zero) and 1 (called one) that satisfy the following axioms for any subsets p, q, r of the set A:

may seem at variance with the laws for elementary algebra, which would state:

Some alternative notations for the operations of Boolean algebra include the following: 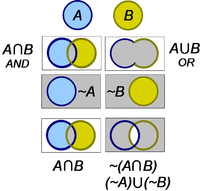 Venn diagrams provide a graphical visualization of the Boolean operations.[4] The intersection of two sets A∩B plays the role of the AND operation and the union of two sets A∪B represents the OR function, as shown by gray shaded areas in the figure. To introduce the NOT operation, the universal set is represented by the rectangle, so ~A is the set of everything not included in A, corresponding to the gray portion of the rectangle in the third panel on the left.

These diagrams provide a visualization of the Boolean axioms as well. For example, the depiction of ~(A∩B) is readily seen to be the same as (~A)∪(~B), as required by the De Morgan axiom.

A truth table for a logical proposition is a formal way to find whether a conclusion is valid or invalid, with ‘0’ corresponding to "invalid" and ‘1’ to "valid". In the context of Boolean algebra, attention is focused upon Boolean functions, denoted f(A, B, C), where variables A, B, C and function f are allowed values ‘1’ or ‘0’ according as the statements they correspond to are valid or invalid. The truth table for f is simply a tabulation of the values of f for all possible values of A, B, C. For example, suppose:

The corresponding truth table is below at the left: 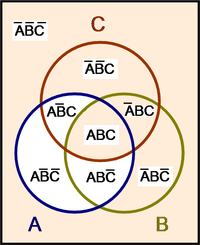 The truth table can be set in correspondence with a Venn diagram, as shown to the right. The truth table entry ‘0’ under column A is interpreted as a set of points not in A, while an entry of ‘1’ is taken to refer to points that are contained in A. In the diagram, the notation Ā for ~A is used to keep labeling compact, and the ‘·’ for intersection is omitted. Labels designate the regions with boundaries surrounding the label, so label ABC denotes the region common to all three sets A, B and C. The colored area encompasses all points corresponding to f = 1, that is all points in the region ~A + B·C, while the white space corresponds to areas outside this region.

In effect, A, B, C are the statements:

and proposition f is:

The truth table and the Venn diagram decide the validity of f for all choices for validity of A, B, and C.

The Boolean function f can be used with other statements that are closer to everyday language, for example, by substituting concrete entities for the various sets.

Then should Bill be smart and a crooked politician (A·B·C), he would fall into the group f:

a combination of stupid people and crooked politicians (of any capacity), making Bill a Democrat or a Republican, a Liberal or a Conservative, depending upon the country, the speaker and the epoch.

The above discussion outlines a method for describing various sets and their subsets, and provides a formal system for deciding when different descriptions of a subset are equivalent. The application of this system to the analysis of logical arguments requires connections to constructions such as "if A, then B", sometimes called conditionals. Assuming the statements A and B are either true ‘1’ or false ‘0’ the conditional "implies", denoted by ‘→’ can be defined by the truth table:

In other words, A → B is false when and only when A is true and B is false. This truth table is the same as ~A + B. As an example, we could take:

Then A → B means the dog always runs when the ball is tossed, but the dog may run otherwise as well, or not.

The biconditional "equivalence" denoted by ‘↔’ can be defined by the truth table:

Then A ↔ B means the light is on if, and only if, the switch is closed. As this example shows, formal logic, like all mathematics, has to be related carefully to reality, and ignoring fuses and burned-out bulbs may or may not be an adequate model for the real situation.

A practical application of this formalism is to switching arrays and logic circuits, where the equivalence of different networks can be established, enabling the selection of the simplest implementation for a chosen function.