A Venn diagram is a graphical representation of common relationships shared by different sets, and is made from arrangements of intersecting closed curves in a plane (or possibly its generalization to higher dimensional surfaces). The Venn diagram may be viewed on its own as a subject of geometry (the geometry of intersecting shapes subject to certain aesthetic rules) or as a tool used to present logical concepts and propositions. "Mapping graphically the relationships of objects or people with something in common can produce beautiful and intricate patterns. It can also help engineers design computer chips."[1]

The use of Venn diagrams was introduced by John Venn (1834-1923).[2] A brief biography is found in Hurley.[3] A great many new Venn diagrams were found by Edwards using a different methodology.[4]

Suppose X and Y are sets, for example, collections of some description. Various operations allow us to build new sets from them, and these definitions are illustrated using the Venn diagram in the figure.[5] The use of circles is conventional, but rectangles or other closed shapes serve the same purpose.

The union of X and Y, written X∪Y, contains all the elements in X and all those in Y. It consists of all three numbered regions ‘1’,‘2’, and ‘3’. For example, X may be "drownings" and Y may be "boating accidents". Then X∪Y represents "water-related accidents", assuming no other categories.

The intersection of X and Y, written X∩Y, contains all the elements that are common to both X and Y. It consists of only the numbered region ‘2’. For example, X may be "drownings" and Y may be "boating accidents". Then X∩Y represents "drownings involving boating accidents".

The universal set (if it exists), usually denoted U, is a set of which everything under discussion is a member. In pure set theory, sets in the abstract often are themselves the objects considered. In that case, U would be the set of all sets, a so-called impredicatively defined object that underlies some paradoxes in set theory. The idea of a universe U need not be paradoxical, however, if one considers sets that are collections of specific items, such as numbers, or colors, or books, for example; see Set (mathematics).

Complement of a set

In the presence of a universal set we can define A′, the complement of A, to be U−A. Set A′ contains everything in the universe apart from the elements of A. This concept also is denoted by Ā and read not A. As a result: 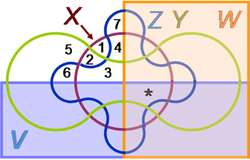 The various possible subsets of three sets X, Y and Z are shown in the left-hand figure as numbered spaces. For example, the area labeled ‘1’ is the subset of all points that are in X but in neither Y nor Z. The subset labeled ‘3’ is the set of all points common to all of X, Y and Z. Every conceivable arrangement of inclusion and exclusion from any combination of X, Y and Z can be assembled from the numbered subsets in the diagram.

The use of circles cannot be extended to more than three sets, however, because insufficient regions can be created to house all the possibilities for subsets. For four sets, ellipses can be used as shown in the figure at right. The numbers correspond to the figure for three sets, but the extra subsets related to set W have not been numbered. For example, as before, the subset labeled ‘3’ is the set of all points common to all of X, Y and Z, but not in W. The asterisk ‘*’ labels the subset of all points common to all four sets X, Y, Z, and W.

As the number of sets increases, the Venn diagrams become more complicated and harder to follow. An example is shown for five sets as devised by Edwards by mapping first onto a sphere and then projecting the results on a plane.[4] The numbered regions correspond to the cases in the figure for three sets, and are all in the upper left quadrant. The symmetry of the diagram shows that the lower left quadrant repeats these cases but with set V included, the upper right quadrant does the same for set W and the lower right quadrant includes both V and W. The asterisk locates the region common to all five sets.

As the number of sets increases, the curves become more convoluted, and a simple visualization becomes difficult, or perhaps impossible, to achieve.

The figure at right shows a three-input logic gate (symbol in the center panel of three panels) that has as output the function f = ABC that is one only when all three inputs are logic ‘1’ and is zero if any input is logic ‘0’. The values of the function for various inputs is listed in the so-called truth table at the bottom of the figure. Corresponding to this truth table is the Venn diagram at the top, in which the various regions are labeled according to the notation explaining which subset a point in each region corresponds to. For example, the region ABC is the region of points that are simultaneously in all three sets A, B and C. Likewise, the region ĀBC is the set of points in B and C but not in A. The outer rectangle is considered to enclose the Universe, so

denotes all the points not in any of A, B, C. The shaded region corresponds to the output of the gate.

It is evident that a mapping exists between all possible logic gates with three inputs and this Venn diagram, with the output of the gate corresponding to one or another region (or combination of regions) of the Venn diagram.

The Venn diagram is found useful for simplifying circuits with many logic gates. For example, a Venn diagram for some complex arrangement of logic gates may be found to have the same Venn diagram as that of a simpler gate array, allowing replacement by the simpler circuit.

A simplification example for a switching network is shown below.

Two contacts are connected by a switch array, and signals A, B, and C and their negations determine whether a switch is open or closed. For example, the switch controlled by A is closed when A is present, while the switch controlled by Ā is closed when Ā is present, and vice versa. The Venn diagram for each branch shows all possible inputs, and the shaded region shows inputs that result in a connection between the left and right contacts.