Sets are axiomatized and investigated in general by a branch of mathematics known as set theory. In particular, set theory studies what conditions must apply to a defining property in order that the elements with that property in fact form a set. (Some choices of property lead to paradoxes,[2] and this topic still is not fully resolved.) The very existence of various sets introduced below is addressed by set theory, for example by the Zermelo-Fraenkel axioms.[3]

The basic property of sets is that they are solely determined by the elements they contain (this is called extensionality). Thus, we can identify sets by listing their elements. For instance, we can talk about the set that has as its elements the numbers 1, 2 and 3. This set is denoted {1, 2, 3}.

Because only the members matter, the order in which the elements are listed does not matter. The sets {1, 2, 3} and {3, 2, 1} have the same elements and thus these two sets are equal. However, there are many contexts in which we want to consider structures that have elements in a certain order and these elements may be the same. Such a structure is called a tuple or a sequence or an ordered set. The tuple containing the elements 1, 2 and 3 (in that order) is different from the tuple containing the elements 3, 2 and 1. These tuples are denotes (1, 2, 3) and (3, 2, 1) respectively, with round brackets (or angle brackets) instead of curly brackets to emphasize the difference between tuples and sets.

Despite the intuitive definition, a set is usually not defined formally in terms of other mathematical objects; rather it is defined by the laws (called axioms) that is satisfies. For instance, one commonly requires that no set may be an element of itself. Because sets are defined by themselves, they are fundamental structures in mathematics and logic. Mathematicians have found ways to define many mathematical objects, such as the real numbers, in terms of sets.

Some sets can be denoted by a list of objects separated with commas, enclosed with curly brackets. As mentioned before, {1, 2, 3} is the set of the numbers 1, 2, and 3. We say that 1, 2, and 3 are its members or its elements. The set with no elements at all is called the empty set, denoted by ∅ = { }.

There are many other ways to write out sets. For example,

can be read as follows: A is the set of all x, where x is between 1 and 10, and x is a natural number. A could also be written as:

Membership in a set is expressed with the ∈ symbol. To say that the set A contains the 2 as an element (or that 2 is an element of A), we write

A set A is a subset of another set B if each element of A is an element of B. One says "A is contained in B" and writes A ⊂ B, alternatively that "B contains A" or B ⊃ A. If A ⊂ B and B ⊂ A, then A = B. Set A is a proper subset of set B if A ⊂ B and A ≠ B. Sometimes, for emphasis, the notation A⊆B is used when the possibility that A=B is allowed, and A⊂B is reserved for the case when A=B is excluded.[4] If A is a subset of B, then B is a superset of A.

A set whose elements are also sets is called a set of sets. An important example is the set called the power set, a set whose elements consist of all the subsets of a set. (It may be observed for a set that is not expressed in the form of an explicit list of all its elements, there may be some complexity in discussing its subsets.) If A is a set, the power set of A often is denoted as ℘(A) or P(A) or 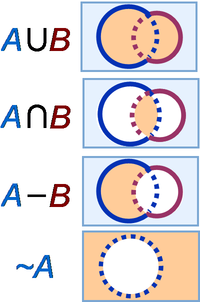 The union or sum of two sets A and B, written A ∪ B, is the set with elements that appear in A or B or both. That is:

The intersection or product of A and B, written A ∩ B is the set with elements that appear in both set A and in set B. That is:

The difference of two sets A and B, written A − B, is the set with elements of A that are not elements of B. It also is called the relative complement of B in set A. That is:

The absolute complement of A, denoted ~A, is the set of all elements not contained in A:

which suggests there exists a broader universal set U that includes A and all other sets under discussion. Evidently it holds that:

These notions are visualized in the Venn diagram of the figure, in which the circles represent subsets A and B of the universal set U, the rectangle.[7] It is usual to consider the rims of the circles as containing no points of their own, but simply identifying the separation of the sets A and B from not A (~A) and not B (~B). If the rims are considered to have points of their own, minutiae of interpretation are introduced, as discussed in a footnote below.[8]

The union and the intersection are commutative, that is:

Two sets A and B are said to be disjoint if A ∩ B = ∅. Also of interest are the absorption law:

and the distributive law:

Other relations involving set operations between multiple sets A, B, C ... are known.[9]

The Cartesian product or direct product of two sets A and B is the set defined by:

This definition can be extended to any number of sets. The couple (a, b) is called an ordered pair, because the order of the two entries is significant, indicating which set the element comes from. The set A × B = ∅ if and only if either A = ∅ or B = ∅.

Given two sets A and B, a mapping (or map) also called a function or transformation from A into B, is a rule associating each element of A to an element of B. Common notations for a mapping f are:

where the element a∈A is associated by the mapping f to an element b∈B, that is:

Two functions f and g are equal if they have the same domain A, the same co-domain B, and if f(a) = g(a) for all a∈A.

Some sets that are ubiquitous in the mathematical literature have special symbols:

Among other such well known sets are the fibonacci numbers, even numbers, odd numbers, quaternions, octonions and the Hamiltonian integers.

Some examples of sets

Editing note: For guidance in formatting of footnotes as done in this article, see CZ:List-defined references.