Chugoku (中国地方[1] Chuugoku-chihoo), also known as San-in San-yo (山陰山陽地方 San-in San-yoo-chihoo)[2], is a region of Japan located on Honshu island. It consists of five administrative areas (prefectures), and is home to the cities of Hiroshima and Okayama, among others. 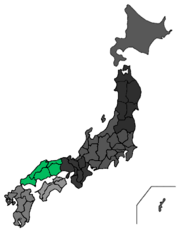 Chugoku comprises the westernmost region of Honshu, and is also divided between San-in (山陰) in the north, where agriculture dominates, and the more industrial Sanyo (山陽 San-yoo) region in the south.[3] These names mean the 'shady' and 'sunny' sides of the mountains respectively. Chugoku further divides itself into five prefectures: Hiroshima and Okayama (both in the Sanyo region), plus Shimane and Tottori (in the Sanin region); Yamaguchi is shared by the north and south of Chugoku.