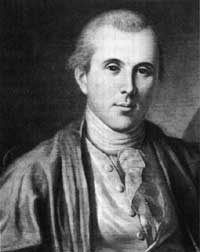 Benjamin Rush (December 24, 1745 - April 19, 1813) was an American physician, educator, chemist, writer, and Founding Father. He was one of Pennsylvania's delegates to the Continental Congress and a signer of the Declaration of Independence. He is called the "Father of American Psychiatry" for his work with mental illness and the American Psychiatric Association uses his likeness on their official seal. He was also a strong proponent of free public schooling, women's rights, and the anti-slavery movement.

He was appointed Treasurer of the US Mint by President John Adams in 1797, which he served until his death from typhus at the age of 68.

Rush was born on the outskirts of Philadelphia in Byberry Township. His father, a gunsmith, died when Benjamin was 6 years old and he was raised by his mother. He began his formal education at the age of 8 at the Nottingham Academy, under the tutelage of his Presbyterian uncle, the Reverend Steve Finley. At the age of 13 he was accepted into the College of New Jersey, a Presbyterian school which is known today as Princeton University. Two years later he was awarded a Bachelor of Arts degree decided to pursue a medical career. His uncle secured him a six year apprenticeship with the leading physician in Philadelphia, Dr. John Redman. Rush proved to be a skillful apprentice, and in 1766 he traveled to London and enrolled at the University of Edinburgh, the top medical school in the world. In London, Rush wrote to the most famous American in England, Benjamin Franklin, in hopes of having him write letters of introduction to his connections at Edinburgh. Although Franklin and Rush had never met, the letters were written and it began a lifelong friendship between the two men. Rush excelled at Edinburgh and after his first year he was admitted into the exclusive Medical Society. Rush was also converted to republicanism by a schoolmate, who convinced him to redirect his anger at Parliament over the Stamp Act of 1765 towards the monarch instead. Rush would graduate from Edinburgh in 1768 and time in London and Paris cultivating his professional and political mind before returning to Philadelphia in 1769.

Rush faced the challenge of establishing a practice in a city split among religious lines and already having a good amount of quality physicians. Consequently, he began his practice by focusing on the poor. He formed the Society for Inoculating the Poor which provided free smallpox vaccinations. He also had a profitable apprenticeship program, teaching seven or more apprentices at a time for a fee.

On August 1, 1769, Rush was chosen by the board of trustees of the College of Philadelphia (renamed University of Pennsylvania in 1789) as professor of chemistry. He was the first person to hold such a position in the colonies. He also wrote Syllabus of a Course of Lectures on Chemistry, the first American chemistry textbook. In 1789, he gave up his chemistry position and began teaching medicine instead.

Rush made his first medical publication on October 14, 1769, titled Dissertation on the Spasmodic Asthma of Children. He went on to write and publish a series of essays that dealt with dieting, physical exercise, and the gout. On November 2, 1770, in a speech before the American Philosophical Society, Rush attacked the popular medical practices of the day, which were influenced by Hermann Boerhaave. He was a proponent of bloodletting to cure diseases, because he was convinced that fevers originated from arterial tension. His radical new ideas on medicine caused him to be an outcast among his peers, who would subsequently stop sending him referrals. Despite being at odds with the medical and religious communities, his success continued to grow. The income from his publications, his salary from teaching, and his number of patients doubling from 1772-1773, allowed for him to be financially secure enough to become more politically active.

Rush joined the staff of the Pennsylvania Hospital in 1783, where he would work until his death. He was the first to recognize that mental illness could be treated, and advocated the humane treatment of those patients. He rejected the popular belief that diseases of the mind were caused by demonic possession or poor morals. In 1792, he pushed the state legislature for funding improvements to the hospital's mental ward. Shortly before his death he published Observations and Inquiries Upon the Diseases of the Mind which the first psychiatric text book printed in the United States.

In August 1793, there was a mass influx of refugees arriving in Philadelphia from the island of Santo Domingo (present day Haiti). Many of them were infected with yellow fever and the mosquitos that spread it made the voyage as well. By November, 5,000 people, which was 10% of the population, had died. Rush was at the forefront of treating and studying the disease. He quickly diagnosed the disease and advised people to flee the city. He incorrectly believed treatment called for heavy bloodletting, sometimes draining up to four fifths of a patients blood. He also persuaded members of the black community to serve as nurses because he believed they were immune to the disease, which also turned out to be untrue. At the end of the epidemic he published his observations in An Account of the Bilious remitting Yellow Fever, which gained him international recognition.

When the Continental Congress convened in Philadelphia it gave Rush the opportunity to mingle and develop friendships with the colonies most high profile politicians, such as John Adams, Thomas Jefferson, and George Washington. Rush wrote many patriotic essays and cultivated life long correspondence with his new friends. In March 1775, he met Thomas Paine, who had recently emigrated from England, in a local bookstore. After reading essay Paine had published calling for the immediate emancipation of slaves, Rush, a strong abolitionist, was eager to develop this friendship. Both men also became firm believers in the need for America to separate from England and Paine began writing a pamphlet that would express this desire. Paine frequently brought manuscripts to Rush to review, to which he offered many suggestions including it's title, Common Sense.

Rush was elected to the Second Continental Congress and served from 1776-1777, where he would go on to sign the Declaration of Independence. He would also be a member of the Pennsylvania Assembly that ratified the Constitution in 1787. He served from 1776-1778 as a surgeon in the army. Rush, knowing that disease was often more deadly than the enemy, was a strong advocate for proper military hygiene, including the abandonment of linen clothing for flannel, short combed hair, and a primary diet of cooked vegetables. Rush found the conditions to be inexcusably substandard and was sharply critical of his former teacher, William Shippen, as well as George Washington. Rush became loosely associated with the Conway Cabal, a group trying to remove Washington from power. He felt compelled to write a letter to Patrick Henry, supporting Washington's replacement by Horatio Gates or Thomas Conway. Henry forwarded the letter on to Washington who in turn accused Rush of disloyalty, leading to his resignation. He would later regret his actions and become a supporter of Washington's presidency.

Rush is also credited with repairing the friendship of John Adams and Thomas Jefferson. Both had served as President, with Adams being a Federalist and Jefferson being a Republican, which created animosity between the two after the heated election of 1800. Rush began a letter writing campaign as a middle man between the two men beginning in 1809 and by 1812 they had began exchanging letters directly.

Rush was also a prominent abolitionist. In 1773, he wrote the pamphlet An Address to the Inhabitants of the British Settlements in America, upon Slave-Keeping. The pamphlet, written in support of a piece of legislation to increase import taxes on slaves, attacked the popular claim that by treating slaves well they were afforded a better life than if they were free. He also joined the Pennsylvania Abolition Society in 1787 and helped to rewrite their constitution.