Mental illness is a disease of the brain and mind. The afflictions prevent a person from functioning to varying extents. They are sometimes treatable with medications or drug therapy as well as psychotherapy and behavior therapy and other methods. Studying mental illness is a relatively new area for science because it was only a few hundred years ago when the dominant view was that people acting abnormally were possessed by demons. But this has been replaced by what is termed a medical model of mental illness which sees it as a potentially treatable illness rather than a supernatural phenomenon.

Generally, psychologists and biochemists and other scientists look at four key areas in assessing mental illness: 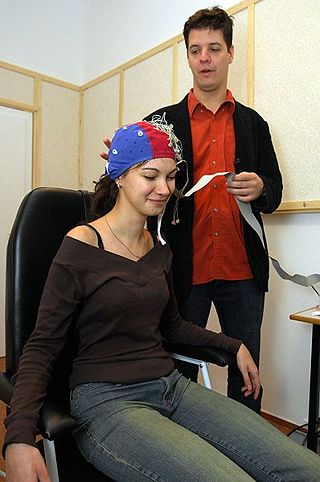 (CC) Photo: Csaba Segesvári
Scientists can measure brain waves using instruments like this one, but assessing mental illness remains a difficult task. They study healthy students to try to develop benchmarks as well as conduct experiments.

Psychologists use a variety of intellectual criteria to try to diagnose mental illness, but determinations are not always exact, and some symptoms overlap with others. But the general criteria are these:

According to the Diagnostic and Statistical Manual of the American Psychological Association, a mental illness is defined as:

A clinically significant behavioral or psychological syndrome or pattern that occurs in an individual and that is associated with present distress (e.g. painful symptoms) or disability (i.e. impairment in one or more areas of functioning) or with a significantly increased risk of suffering death, pain, disability, or an important loss of freedom.[1]

Here are several general categories of mental illness which encompass many diseases. Some patients have symptoms from several of these syndromes, and there can be considerable overlap.

Schizophrenia is a mental illness marked by a break from reality, which is characterized by such symptoms as: delusions, hallucinations, disorganized speech (in which a person can make nonsense sounds, interspersed with seemingly sensible speech), and behavior which is seen as extremely disorganized or catatonic (marked by immobility, lack of awareness, or not talking). It is a serious illness which can be life threatening, and possibly harmful to others, particularly if a person becomes violent or suicidal. It strikes about 1 in every 10,000 persons, and symptoms usually become more pronounced when during the late teens and early twenties, with symptoms become more full-blown when a person is in their middle to late twenties, with males generally showing signs somewhat earlier than females (although there have been cases when schizophrenia has been diagnosed in children or young teenagers, but research in this area is not definitive.) Sometimes it's marked by what's termed a flat effect, meaning a person doesn't show any signs of emotions or emotionality. Other symptoms include alosia (dull blocked thoughts) as well as avolition (showing no signs of motivation or interest in doing things.) People with this affliction have trouble in school, keeping a job, and have difficulties managing relationships with others, such as love affiliations with significant others. What causes it? It's uncertain, but some analyses suggest problems with brain chemistry and even malformed areas of the brain; there have been studies suggesting that too much criticism of a person may be a factor. Medication

Depression is extended sadness, that is, a sadness that lasts for days or even weeks, which doesn't go away. It's characterized by marked disinterest in activities in life or anhedonia, as well as difficulties in sleeping, excessive sleeping, feelings of worthlessness, excessive guilt, as well as trouble concentrating and focusing. Sometimes there is weight gain or weight loss or other changes in appetite, as well as repeated thoughts of death or suicide. Speculation about possible causes of depression include models from biology, particularly it may be the result of certain chemicals in the brain. In addition, possible causes include psychological, such as an experience of loss, such as losing one's beloved or having a close friend fall prey to disease or else moves away.

Treatments, in many situations, are effective, and include:

Bipolar disorder is marked by extreme mood shifts from mania to depression, and also has been termed manic-depression. The mania phase has a mood of elation, sometimes irritability, with a decreased need for sleep, racing thoughts, and sometimes an extreme need and pressure to talk, with boosted levels of energy and possibly excessive engagement in pleasurable activities (such as gambling, spending sprees, or sexual excursions. These episodes can be very disruptive and can be intensified by stress. But then the mood can shift to a mood of dour depression, sometimes within the span of an hour, and is marked by being tired, lack of interest, and the other signs of depression.

Scientists speculate that the cause of bipolar disorder is rooted in chemistry. Treatments are with drugs such as mood stabilizers, including Lithium and Depakote.

Anxiety is marked by stress, excessive worry, and nervousness. There are different types:

There are specific types of anxiety as well, such as a fear of heights acrophobia, crowds (including packed elevators or even driving in dense traffic) called agorophobia, closed spaces such as closets or crowded subway cars or claustrophobia, night or nyctophobia, germ contamination or mysophobia, or animals or specific animals or zoophobia. One listing suggests there are several hundred types of specific anxieties (with a specific word for each type.)

There is research speculating into what causes certain panic disorders:

Anxiety has been treated using various behavior therapys, such as Rogerian therapy, which utilizes the principle of cognitive dissonance proposed by psychologist Leon Festinger. The idea is that the mind can not have two entirely different ideas at the same time; if it tries to have two opposing ideas at once, this creates a kind of dissonance or disharmony, which is like mental motivation to somehow resolve the conflict. Accordingly, if a person is afraid of bees, for example, he or she can't keep the idea of a bee crawling on the skin and the idea of relaxing by a waterfall in the head at the same time. The person will either be highly tense or relaxed but can't have both reactions at the same time, since one response has to give. Accordingly, in Rogerian therapy, a therapist will ask a patient to create a list of anxiety-producing thoughts ranked from least scary to most scary (example: least scary: the word "bee" in a magazine" slightly more scary: bee buzzing near a window ... scariest: getting stung by 27 bees) and then, with a stepwise procedure beginning with the least scary thought, try to get a patient to think that thought while staying relaxed.

In psychotherapy, a general course of counseling is to try to turn what if thinking, into so what thinking, and to help patients understand the difference between rational and irrational fears.

Scientists are learning more about how the brain works, including its internal wiring or circuitry, and studying how brain chemistry interacts with tissue and how it processes ideas. By applying magnetic resonance imaging with statistical analysis, it's possible to use noninvasive techniques to measure sections of the brain in terms of volume and mass in an emerging rapidly-changing discipline called brain morphometry,[2] and perhaps new findings will bring new understanding to the wide range of mental illnesses, as well as new and more effective treatments.