This article is about the Germanic and Greek name Arne. For other uses of the term Arne, please see Arne.

Arne is a male forename of Germanic origin, closely related to the name Arnold. Furthermore, Arne is in use as a surname, especially in English-speaking countries. Arne can also be a female forename. In this case the name is of archaic Greek origin (Ἄρνη).

Etymology and meaning of the Germanic name

The first syllable of the name Arne (ger.: [ˈaʁnə], dan.: [ˈɑʶnə], engl. often: [æʁn]) probably stems from the Germanic *arn ("eagle"), which is the hypothetical preform of the Old High German aar and aro as well as of the Old Norse örn or ørn, which all have the same meaning. It has been proposed that *or- and *er- respectively ("large bird", "eagle") are its Proto-Indo-European root.

The most probable theory on the origin of the name Arne describes it as the final stage of a contracting development, parallel to Arnold, both of which go back to the Old High German name Arenwald (aro or aar and wald; "Has the strength of an eagle").[1] The Proto-Indo-European root of the second syllable is said to be *wal-d(h)- from the base *wal- ("to be strong", "to rule").[2]

In Scandinavia Arne is in widespread use as a forename, where it is often combined with other forenames, e.g. as Tor-Arne, Leif-Arne, John-Arne or Nils-Arne, either with or without a hyphen. In Germany the form Arno is more frequent. The German diminutive forms of Arne are Arnele or Ernele. In Switzerland the diminutive forms Ärneli and Ernle or Erndle are also known.

Origin and meaning of the Greek name 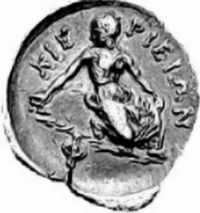 Arne playing with astragaloi
© CNG (Used by permission)
The word Ἄρνη (Arne) was primarily a toponym used for archaic "cities of origin" in Greece,[3] especially Boeotia[4] and Thessaly,[5] In addition it was used for Thracian places of origin.[6] Therefore women called Arne were in all probability (ruling?) inhabitants of these cities or descendants of their archaic population. According to legend the archaic Greek cities derived their name from Arne, nymph daughter of king Aeolus, who is said to have reigned in Aeolia.[7] Aeolian rule and culture covered Thessaly, Boeotia, parts of the Aegean Sea including Lesbos and North-Western Anatolia.

The etymology and true origin of the word arne is unclear, but like many Greek words a prior transmission from Western Anatolia and the Ionian or Lydian language could theoretically be assumed.[8] Different from the Greek verb ἀρνέομαι (arnéomai; "to refuse", "to deny"), the first syllable of which probably stems from the Proto-Indo-European etymon *ar- ("to deny", "to refuse", "to renounce"), a decision on a similarly distinct origin for ἄρνη (arne) would only be conjecture. It should be noted that the Proto-Indo-European root *an- has a compatible meaning ("[male or female] ancestor"), though a more probable origin would be the parallel root *urh1-en- with ἄρνε (arne, dual form of ἀρνός, arnós, related to the earlier ἀρήν, arén, all meaning "lamb", "sheep"), which would connect the "name of origin" to the beginnings of civilization and shepherding 4000 BC in Asia Minor.[9] Independent of the historical, etymological or geographical origin the name Arne is closely connected to the legendary foundation of the Greek-Hellenic (and Boiotian) nation.

Variants of the Germanic name