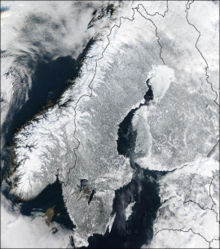 With a landscape largely shaped by glaciers over the last ice age, the Scandinavian Peninsula is as picturesque in the winter as it is cold.
Image courtesy of Jacques Descloitres, MODIS Land Rapid Response Team at NASA GSFC