In physics, angular momentum is a kinematic property of a system consisting of one or more point masses. Its importance derives from the fact that it is conserved in several physical circumstances, notably for objects in field-free space and for central-symmetric interactions. (Recall that a conserved property of a system is one that does not change over time.)

PD Image
Point mass m with velocity v has angular momentum L ≡ m r × v with respect to O. L is a vector pointing towards the reader, perpendicular to the plane of drawing, which is spanned by r and v.

It follows from the definition of cross product that the vector L is perpendicular to the plane of the figure and points towards the reader. Note that the definition p ≡ m v for the linear momentum is introduced here.

The definition of the angular momentum of a system of n point masses is the following simple generalization:

For simplicity we consider first the case of one point mass, generalization to n point masses is straightforward. The following important result will be proved: a particle that moves in a central-symmetric potential has a conserved angular momentum.

where we invoked Newton's second law

Hence the time derivative of the angular momentum is equal to the torque N,

It follows that the angular momentum is conserved—i.e., its time derivative is zero—if the applied torque N is zero, which means that either F is zero, or r and F are parallel, because in that case the cross product vanishes.

The former case (F = 0) occurs when the mass moves uniformly in homogeneous space (no external forces). Then also the linear momentum of the point mass is conserved, and therefore one rarely considers the angular momentum in the case of uniform rectilinear motion.

so that for a conservative force the torque is

The quantity in brackets is known in group theory as a Lie derivative of the full rotation group SO(3). In quantum mechanics it is a well-known operator, namely the orbital angular momentum operator (except for the factor

From the general properties of Lie derivatives—or equivalently orbital angular momenta—it follows that the torque vanishes whenever the potential V(x,y,z) is rotationally invariant (also known as an isotropic or central-symmetric potential). This means that the function V(x,y,z) depends on r only, when expressed in spherical polar coordinates (r, θ, φ).

We can prove the vanishing of the torque more explicitly by expressing the gradient ∇ in spherical polar coordinates and writing the cross product as a determinant, using that the derivatives of V with respect to θ and φ are zero,

Note that the third member in this equation shows that r (the second row) and −F (the third row) are indeed parallel to each other in the case of an isotropic potential. Both vectors possess only a radial coordinate; r by definition and F because the gradient of V has only one non-vanishing component, the radial component.

When in a system of n point masses the particles do not interact mutually, the extension is simply:

where the forces F i are external. If the total external torque is zero, the total angular momentum of the system is conserved.

The total internal torque on particle i is,

Under assumption of additivity, the total internal torque can be written as

where F i (characterized by a single suffix) is external.

Separation of center of mass

The center of mass C is determined by

Introduce s i for particle i at point P i

If the total system moves in homogeneous (field free) space, the first term is conserved and is usually not of much interest. The second term, the sum of the angular momenta of the n particles with respect to the center of mass, is usually designated the total angular momentum of the system,

where the position vectors s i are defined with respect to a system of axes with origin in the center of mass C of the system.

Circular motion around a fixed axis

A system often encountered in physics is a particle (point mass) that moves along a circle in a fixed plane. Let us choose a system of axes such that the plane of motion is the x-y plane, with the z-axis perpendicular to the plane.

The coordinates of the particle and its time derivative are

where we used that the radius r of the circle is time-independent. The angular momentum is given by 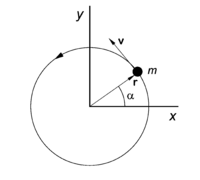 Point mass m moves counterclock-wise on a circle. Instantaneous velocity v is tangent to the circle. Angular velocity and angular momentum point toward the reader.

The quantity mr 2 is the inertia moment

It is of some interest to point out that this simple relation becomes a vector-tensor relation for more general motions of more general systems (rigid rotors) for which the rotational axis is not fixed in space: L and ω remain vectors, but the inertia moment generalizes to a second rank, symmetric, tensor.

where the inertia tensor is given by

and ω is the angular velocity of the rotor. The coordinates x i, y i, and z i of the particles depend on time. In order not cloud the notation this dependence is not shown explicitly. Note that, since the inertia tensor is in general not (a constant times) the identity matrix, the two vectors, L and ω, are in general not parallel, in contrast to the case with one fixed rotation axis—motion on a circle.

Angular velocity of a rigid body

We consider a system of n point masses (particles) with fixed—time-independent—relative positions. The position vectors r i(t) are all with respect to a laboratory-fixed frame with origin in the center of mass of the system. The lengths of the n vectors and the angles between them are all time-independent, because the system is rigid. We will prove the following expression for the time derivatives of the position vectors,

where the vector ω(t) is a 3-vector which is the same for all n particles, it is the angular velocity of the rigid body.

The vectors r i(0) determine the shape of the rigid body at time zero. This shape is invariant since all inner products are time-independent. Indeed,[4]

Differentiation with respect to time gives

and hence the matrix product

Differentiation of a position vector with respect to time, followed by insertion of the identity matrix gives,

where the vector ω is composed of the matrix elements of the antisymmetric matrix,

The fact that the matrix-vector multiplication may be written as a cross product follows most easily by direct verification. This proves the desired result, equation (1).

Let us first consider one arbitrary particle, for the sake of clarity we drop the particle index. The angular momentum consists of terms of the type

where we used Eq. (1). From vector algebra we know that (we drop temporarily the time-dependence)

which written out in components is

We define the inertia moment of the rigid body by

The coordinates of the particle are time-dependent and expressed with respect to a laboratory frame. Insertion into the expression of the angular momentum gives the final result

In quantum mechanical applications the angular momentum—a vector—is often expressed with respect to a system of axes that is attached to the body and rotates with it. We will find an expression for it. Consider to that end first the equation,

where we used twice that for arbitrary vectors a and b and orthogonal matrix with unit determinant,

and where we introduced for temporary use the short-hand notation,

In the same way as above, the expression in curly brackets can be worked out:

From this and the earlier result follows parenthetically that the inertia tensor is indeed a tensor,

because this rotational relation is often taken as defining a tensor.

The vectors L and ω in this relation are expressed with respect to a laboratory-fixed frame. If we now make the assumption that this frame coincides at time zero with the body-fixed frame, it follows that

is the inertia moment in the body-fixed frame. Define further,

then we see that in the body-fixed frame angular momentum depends again linearly on angular velocity through a tensor-vector expression,

where the inertia tensor is constant.

We have shown above that L, which contains the three components of the physical vector angular momentum

with respect to the stationary laboratory frame, is independent of time when there is no external torque. Hence the physical vector

, a quantity that exists irrespective of choice of frame, is itself time-independent in absence of torque. Now, LBF contains the components of

, but re-expressed with respect to a moving frame. Hence, the components of LBF are time-dependent. Indeed, its time-dependence is given by Eq. (2).