In quantum mechanics, angular momentum is a vector operator of which the three components have well-defined commutation relations. This operator is the quantum analogue of the classical angular momentum vector.

Angular momentum entered quantum mechanics in one of the very first—and most important—papers on the "new" quantum mechanics, the Dreimännerarbeit (three men's work) of Born, Heisenberg and Jordan (1926).[1] In this paper the orbital angular momentum and its eigenstates are already fully covered by the algebraic techniques of commutation relations and step up/down operators that will be treated in the present article. In 1927, Wolfgang Pauli introduced spin angular momentum,[2] which is a form of angular momentum without a classical counterpart.

Angular momentum theory—together with its connection to group theory— brought order to a bewildering number of spectroscopic observations in atomic spectroscopy, see, for instance, Wigner's seminal work.[3] When in 1926 electron spin was discovered and Pauli proved less than a year later that spin was a form of angular momentum, its importance rose even further. To date the theory of angular momentum is of great importance in quantum mechanics. It is an indispensable discipline for the working physicist, irrespective of his field of specialization, be it solid state physics, molecular-, atomic,- nuclear,- or even hadronic-structure physics.[4] 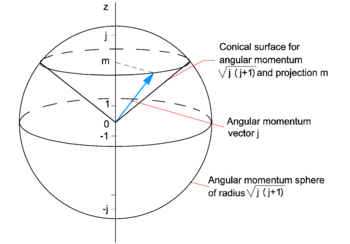 Consider a quantum system with well-defined angular momentum j, for instance an electron orbiting a nucleus. In the first place the length of the angular momentum is quantized, it can only take the discrete values

and no other values. Hence the endpoint of the angular momentum j (the blue arrow in the figure) lies on the surface of a sphere of radius

. In the second place, its projection on an axis in space (the quantization axis, usually taken as the z-axis) is quantized, it can only take the values

where j is the quantum number that determines the length of j. The endpoint of the blue arrow does not cover the full surface of the sphere, but can only lie on the intersection of the sphere and certain quantized cones, because the projection m of j on the z-axis is quantized. The discrete quantum number m is integral or half-integral, depending on whether j is integral or half-integral.

The position of the blue arrow on the surface of a cone characterized by certain j and m is completely undetermined, it is equally probable everywhere. This is an illustration of Heisenberg's uncertainty principle.

The classical angular momentum of a point mass is,

where r is the position and p the (linear) momentum of the point mass. The simplest and oldest example of an angular momentum operator is obtained by applying the quantization rule:

is Planck's constant (divided by 2π) and ∇ is the gradient operator. This rule applied to the classical angular momentum vector gives a vector operator with the following three components,

The following commutation relations can be proved,

The square brackets indicate the commutator of two operators, defined for two arbitrary operators A and B as

where we used that all the terms of the kind

mutually cancel. Since the three components of L do not commute, they do not have a common set of eigenfunctions.

The total angular momentum squared is defined by

This operator commutes with any of the three components,

so that common eigenfunctions of L2 and one of its components can be found.

Note, parenthetically, that eigenfunctions of L2 have been known since the nineteenth century, long before quantum mechanics was born. They are spherical harmonic functions. Indeed, in terms of spherical polar coordinates the operator is,

and this expression appears in the associated Legendre equation.

Pauli introduced in 1927 the following three matrices, which are now known as Pauli spin matrices,

These Hermitian matrices represent Hermitian operators on a two-dimensional linear space over the field of complex numbers: spin space. Spin angular momentum operators are defined by

The commutation relations of these operators follow by matrix multiplication, for instance,

It is shown in this manner that

which may be compared with the commutation relations of the orbital angular momenta given earlier.

is the Levi-Civita symbol,

Together the three components define the vector operator j. The square of the length of j is defined as

From here on we put

It can be shown from the above definitions that j2 commutes with jx, jy, and jz

When two Hermitian operators commute a common set of eigenfunctions exists. Conventionally jz is chosen to supplement j2. From the commutation relations the possible eigenvalues can be found. The result is

The raising and lowering operators change the value of

A (complex) phase factor could be included in the definition of

The choice made here is in agreement with the Condon and Shortley phase conventions. The angular momentum states must be orthogonal (because their eigenvalues with respect to a Hermitian operator are distinct) and they are assumed to be normalized

Proof of properties of eigenstates

From these properties alone the eigenstates can be constructed. The steps in the construction are:

Since a Hermitian operator squared has only real, nonnegative, expectation values,

, and since an eigenvalue is a special kind of expectation value—namely one with respect to an eigenvector—it follows that j2 has only non-negative real eigenvalues. Therefore we write its eigenvalue as the squared number a2.

and an eigenvector of jz with eigenvalue b + 1, so that

The left hand side is nonnegative, while k is unlimited. Thus, if we let k increase, there comes a point that the norm on the left hand side would have to be negative or zero, while the norm on the right hand side would still be positive. A negative norm is in contradiction with the fact that the ket belongs to a Hilbert space. Since no power of the step up operator maps a ket outside Hilbert space, there must exist a maximum value kmax of the integer k, such that the ket

The requirement that all kets involved are normalized, while fixing phases, gives the formula to be proved. The normalization is simple: