In atomic spectroscopy, Russell–Saunders coupling, also known as LS coupling, specifies a coupling scheme of electronic spin- and orbital-angular momenta. The coupling scheme is named after H. N. Russell and F. A. Saunders (1925).[1] Russell-Saunders coupling is useful mainly for the lighter atoms, roughly for atoms with atomic number less than 57. For heavier atoms j-j coupling gives a better approximation for atomic wave function.

The dimension is 1×(1+3+5) + 3×(1+3+5) = 36. The electronic configuration 2p3p stands for 6×6 = 36 orbital products, as each of the three p-orbitals has two spin functions, so that in total there are 6 spinorbitals with principal quantum number n = 2 and also 6 spinorbitals with n = 3. A check on dimensions before and after coupling is useful because it is easy to overlook coupled states.

Russell-Saunders coupling gives useful first-order states in the case that one-electron spin-orbit coupling is much less important than the Coulomb interactions between the electrons and can be neglected. This occurs for the low Z part (i.e., the lighter elements) of the periodic table, roughly up to the lanthanoids (previously lanthanides, starting at Z = 57) . The usefulness stems from the fact that states of different L and S do not mix under the total Coulomb interaction, so that LS coupling achieves a considerable block diagonalization of the matrix of a Hamiltonian in which spin-orbit coupling is absent. 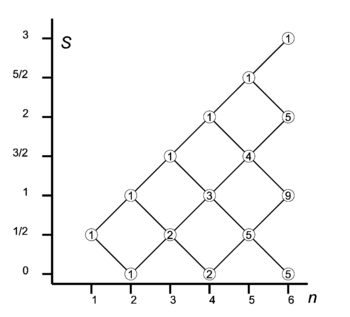 Let us consider how to couple n spin-½ particles (electrons) to eigenstates of total S2.

A two-particle spin system also has a spin-singlet S = 0. Adding a spin to it leads to a doublet, S = 1/2. It can be shown that the doublet thus obtained is orthogonal to the doublet with the intermediate (n = 2, S = 1) spin triplet. Two different paths lead two different—even orthogonal—three-electron spin doublets. This is why the number 2 is listed in the circle at the n = 3, S = 1/2 node.

The system of sequentially coupling one electron at the time should be clear now. Every path in the branching diagram corresponds to a unique (2S+1)-dimensional ladder of eigenfunctions of total spin angular momentum operator S2 with spin quantum number S. Ladders belonging to different paths are orthogonal. The number in the circle indicates how many paths have this node as endpoint.

The actual coupling of electron n to a state of n − 1 electrons uses special values of Clebsch-Gordan coefficients. Let us use k as a path index (e.g., for S = 1 and n = 6, the index k runs from 1 to 9). Then addition (line upwards) gives the n-electron spin state:

In particular, for n = 2 the spin triplet results:

which gives the triplet "ladder", where in the notation the index k = 1 is suppressed,

Here the more common notation for one-electron spin functions (α for m = ½ and β for m = −½) is introduced. Note that all three triplet spin functions are symmetric under interchange of the two electrons.

a function that is antisymmetric (changes sign) under permutation of electron 1 and 2.

The one-electron orbital angular momenta l can also be coupled sequentially, i.e., one after the other. Different paths give orthogonal states. Consider as an example the configuration p3. Repeated application of the triangular conditions gives that 33 = 27 dimensional space decomposes as follows in eigenspaces of L2, [with L ≡ l(1) + l(2)+ l(3) ]:

where the two-electron quantum numbers L12 of electron 1 and 2 precede in brackets the letters designating the three-electron angular momentum quantum number. Dimensions are: 7 + 5 + 5 + 3 + 3 + 3 + 1 = 27. There are two orthogonal D spaces and three orthogonal P spaces, while there is only one F and S space (of dimension 7 and 1, respectively).

The algorithm should be clear now. For instance, to decompose the 135-dimensional space belonging to the configuration p3d, one can use the result for p3 and add d to any of the eigenspaces and use the triangular conditions again, as in F × d gives L = 5, 4, 3, 2, 1.

So far it was ignored the Pauli principle that states that many-electron wave functions must be antisymmetric under simultaneous transposition of spatial and spin coordinates of any pair of electrons. This principle affects considerably the results for configurations of equivalent electrons, which by definition are electrons with the same n (principal) and l (azimuthal or angular momentum) quantum numbers. It will be shown that certain terms (LS states) arising from equivalent electrons are forbidden by the Pauli principle. Terms arising from non-equivalent electrons are never forbidden, they simply give rise to non-vanishing antisymmetric states.

and it follows that the product is symmetric under transposition.

So, there are two-electron singlet and triplet spin functions. In both cases MS = 0 functions are considered, thus,

Antisymmetric functions, satisfying the Pauli principle, are obtained by use of the antisymmetrizer

, where (12) transposes simultaneous space and spin coordinates of electron 1 and 2 and (1) is the identity operator (does nothing).

The calculation for the spin triplet is repeated:

The symmetric spatial function 2px(1)2px(2) multiplied by the symmetric spin triplet function does not have a non-vanishing antisymmetric component, that is, this space-spin product is forbidden by the Pauli principle.

Conversely, it can be shown that an antisymmetric orbital function, for instance: px(1) py(2) - px(2)py(1), can only combine with a symmetric spin function to a non-vanishing—Pauli allowed—totally antisymmetric spin-orbit function.

In general one can show from the symmetry of the Clebsch-Gordan coefficients that eigenstates of L2 for two equivalent electrons with odd quantum number L are antisymmetric under transposition of the electron coordinates. Hence these odd L states must be multiplied by symmetric spin functions (triplets S = 1). In total L+S must be even. The even L states (still for two equivalent electrons) are even under transposition and must be multiplied by odd spin functions (singlets, S = 0). Again L+S must be even in order to get a non-vanishing result upon antisymmetrization.

Before continuing, it must be pointed out that there exists an interesting symmetry between holes and particles. If an electron from a closed subshell is removed a hole is prepared in the subshell. It can be shown that a hole shares many properties with an electron: it has the same orbital and spin angular momentum quantum number. A number of holes must satisfy the Pauli principle in the very same way as an equal number of electrons.

Knowing all this one can construct the following table

When considering more than two electrons, one can ignore closed (sub}shells in the Russell-Saunders coupling because they have L = S = 0.

The conventional, much more tedious, non group-theoretical, way to proceed is by a "bookkeeping" procedure. Basically, one tabulates all the combinations of one-electron quantum numbers allowed by the Pauli principle and determines the combination with highest ML and MS, which are given by the respective sums of the orbit- and spin- magnetic quantum numbers of the individual electrons. This combination is unique and defines "ladders" of eigenstates with L = MLmax and S = MSmax. One removes the ladders starting with these maximum values from the table and searches for the next unique combination of highest ML and MS that are left in the table. This is repeated until the table is empty and all ladders (LS states) have been assigned.

It is of some historical interest to remark that the latter procedure was followed by Hund[4] in 1925, before the discovery of spin or introduction of Slater determinants. The following table is a combination of Tables 3 and 4 of Hund [4] (with the correction of two "bookkeeping" errors made by Hund, proving that this procedure is error prone).

See Ref. [5] for a similar table of equivalent f electrons.