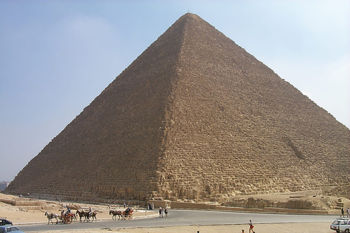 Egypt has been inhabited for the past ten thousand years, from prehistoric Egypt, and its ancient culture was one of the most important in antiquity, producing monuments like the Sphinx and pyramids. It was first united around 3200 BCE, by the Wild Bull Lord, Menes. The civilization created lasted for the next 3,000 years until 332 BCE, when it was conquered by Alexander the Great. This era produced many magnificent temples and monuments, and of course the pyramids.

By about 3,100 BCE, Egypt's early civilization had formed around one ruler. At this time, Hor-Aha, first king of Egypt, came to power, after the land was unified by his predecessor, Narmer. He and the next seven monarchs made up Egypt's first dynasty: Djer, Djet, Merneith, Den, Anedjib, Semerkhet and Qa'a.[1] Narmer, however, is sometimes identified as the first true king, and there may have been other monarchs at this time whose names have been lost.

During the new kingdom Ancient Egypt reached the height of its power, becoming the richest and most powerful in its history

Alexander the Great and his armies arrived at Egypt in the autumn of 332 BCE. Initially the Persian governor (satrap) tried to resist him, but he soon surrendered, thus ending the second period of Persian domination over the country. Egyptian sources describe Persian rule as oppressive, so Alexander was seen more as a liberator than a conqueror.