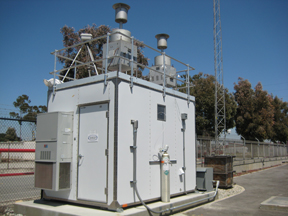 The Air Quality Index (AQI), also known as the Air Pollution Index (API), Pollutant Standard Index (PSI) or Air Quality Health Index (AQHI), is a number used by government agencies to characterize the quality of the ambient air at a given location. As the AQI increases, the severity of probable adverse health effects increases as does the percentage of the population expected to be affected by the adverse health effects.

In many countries, air quality index values are divided into ranges, and each range is assigned a descriptor (i.e., a very few words describing the air quality or the health effects of the range) and often a color code as well. A government agency might also encourage members of the public to avoid strenuous activities, use public transportation rather than personal automobiles and work from home when AQI levels are high.

Many countries monitor ground-level ozone, particulate matter (PM10), sulfur dioxide (S02), carbon monoxide (CO) and nitrogen dioxide (NO2) and calculate air quality indices for these pollutants. Most other air contaminants do not have an associated AQI.

Environment Canada, the national environmental protection agency of Canada, uses Air Quality Health Index (AQHI) categories ranging from 1 to 10+ and each category has an assigned color code (see adjacent table) that enables members of the general public to easily identify their health risks as indicated in published air quality forecasts.[1]

As shown in the adjacent table:

As of 2009, many of the Canadian provinces, if not all, have adopted the AQHI categories implemented by Environment Canada.

China's Ministry of Environmental Protection (MEP)[2][4] is responsible for monitoring the level of air pollution in China.

As of August 2008, MEP monitors daily pollution level in its major cities and develops an Air Pollution Index (API) level that is based on the ambient air concentrations sulfur dioxide, nitrogen dioxide, particulate matter (PM10), carbon monoxide, and ozone as measured at monitoring stations in each of those major cities.[2][4]

The adjacent table presents China's national API scale, which is not color coded and uses a scale 0 to more than 300, divided into five ranges of air quality categorized as excellent, good, slightly polluted, heavily polluted and hazardous.

China's capitol city, Beijing, has its own API scale, which was developed by the Beijing Municipal Environmental Protection Bureau.[5] As can be seen in the adjacent table, the API scale used by Beijing differs quite significantly from China's national scale in that:

Hong Kong's color coded Air Pollution Index (API) scale ranges from 0 to 500 corresponding to adverse health effects that range from low to severe as shown in the adjacent chart:[3]

Although Hong Kong is now part of China, it can be seen that Hong Kong's API scale differs from both China's scale and Beijing's scale.

The air quality in Malaysia is described in terms of an Air Pollutant Index (API). The API is an indicator of air quality and was developed based on scientific assessment to indicate in an easily understood manner, the presence of pollutants and its impact on health. The API system of Malaysia closely follows the similar system developed by the U.S. Environmental Protection Agency (U.S. EPA). As shown in the adjacent table, Malaysia does not color code their air quality categories.

Monitoring stations measure the concentration of five major pollutants in the ambient air: PM10, sulfur dioxide, nitrogen dioxide, carbon monoxide and ozone. These concentrations are measured continuously on an hourly basis. The hourly value is then averaged over a 24-hour period for PM110 and sulfur dioxide and an 8-hour period for carbon monoxide. The ozone and nitrogen dioxide are read hourly. An hourly index is then calculated for each pollutant. The highest hourly index value is then taken as the API for the hour.

When the API exceeds 500, a state of emergency is declared in the reporting area. Usually, this means that non-essential government services are suspended, and all ports in the affected area closed. There may also be a prohibition on private sector commercial and industrial activities in the reporting area excluding the food sector.

The air quality in Mexico is described and reported hourly in terms of a color coded Metropolitan Index of Air Quality (IMECA), developed by the Ministry of the Environment for the Government of the Federal District.

The IMECA is calculated from the results of real-time monitoring of the ambient concentrations of ozone, sulfur dioxide, nitrogen dioxide, carbon monoxide and particulate matter (PM10).

The IMECA was developed specifically for the Federal District of Mexico which only encompasses Mexico City and its surrounding suburbs and adjacent municipalities.

The real-time monitoring of the ambient atmosphere is performed by the Sistema de Monitoreo Atmosférico de la Ciudad de México (SIMAT or System of Atmospheric Monitoring for Mexico City).

SIMAT's real-time monitoring includes monitoring of the ultra-violet (UV) radiation from the sun and the results are also described and reported hourly as IUVs (Índice de Radiación Ultravioleta) in a manner that is similar to the reporting of the IMECAs.[8]

Singapore's National Environment Agency (NEA) in the Ministry of the Environment and Water Resources (MEWR) has the responsibility for the real-time monitoring of the concentrations of sulfur dioxide, nitrogen dioxide, carbon monoxide, ozone and PM10 in the ambient air of Singapore.

The real-time monitoring of the ambient air quality is done by a telemetric network of air quality monitoring stations strategically located in different parts of Singapore.

The NEA uses the real-time monitoring data to obtain and report 24-hour Pollution Standard Index (PSI) levels along with their corresponding air quality categories as shown in the adjacent table and which does not use color coding.[9]

AEA Technology, a British environmental consulting company, issues air quality forecasts for the United Kingdom (UK) on behalf of the Department for Environment, Food and Rural Affairs (Defra).[11] The scale used in the United Kingdom is an Air Pollution Index (API) with levels ranging from 1 to 10 as shown in the attached table and it is color coded.

The scale was thoroughly studied and approved by the United Kingdom's government advisory body, namely the "Committee on Medical Effects of Air Pollution Episodes" (COMEAP).[11]

The scale is based on continuous monitoring, in locations throughout the United Kingdom, of the ambient air for the concentrations of the major air pollutants, namely sulfur dioxide, nitrogen dioxide, ozone, carbon monoxide and PM10. The forecasts issued by AEA Technology are based on the prediction of air pollution index for the worst-case of the five pollutants.

As shown in the adjacent table, the health effect of each API range is referred to as its banding rather than as its category. The health effect bandings for the API ranges are low, moderate, high and very high.

The Air Quality Index (AQI) ranges used by the U.S. Environmental Protection Agency (U.S. EPA) and their corresponding health effect categories and color codes are provided in the adjacent table. The U.S. EPA's AQI is also known as the Pollution Standards Index (PSI).

If multiple pollutants are measured at a monitoring site, then the largest or "dominant" AQI value is reported for the location.

A national map of the United States containing daily AQI forecasts across the nation, developed jointly by the U.S. EPA and NOAA is also available online.[15]

In the United States, the concentrations of the air pollutants involved in the AQI are usually expressed as: