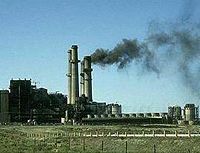 AUSTAL2000 is an air pollution dispersion model for simulating the dispersion of air pollutants in the ambient atmosphere.[1][2][3] It was developed by Ingenieurbüro Janick[4] in Dunum, Germany under contract to the Federal Environment Agency of Germany. Although not named in the TA Luft,[note 1] it is the reference dispersion model accepted as being in compliance with the requirements of Annex 3 of the TA Luft and the pertinent VDI Guidelines.[note 2]

It simulates the dispersion of air pollutants by utilizing a Lagrangian simulation model and it has capabilities for building effects, complex terrain, pollutant plume depletion by wet or dry deposition, and first order chemical reactions. It is available for download on the Internet free of cost.[5]

AUSTAL2000G is a similar model for simulating the dispersion of odors and it was also developed by Ingenieurbüro Janicke. The development of AUSTAL2000G was financed by three German states: Lower Saxony (German: Niedersachsen), North Rhine-Westphalia (German: Nordrhein-Westfalen) and Baden Württenberg.