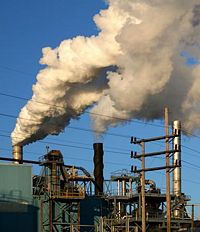 The AERMOD air pollution dispersion model is an integrated system for modeling the dispersion of air pollutants. It includes three modules:[1][2][3]

AERMOD also includes PRIME (Plume Rise Model Enhancements)[4] which is an algorithm for modeling the effects of downwash created by the pollution plume flowing over nearby buildings.

History of the development of AERMOD

AERMOD was developed by the AERMIC (AMS/EPA Regulatory Model Improvement Committee), a collaborative working group of scientists from the AMS and the EPA.[1] The AERMIC was initially formed in 1991.

On April 21st of 2000, the EPA proposed that AERMOD be adopted as the EPA's preferred regulatory model for both simple and complex terrain.[5] On November 9th of 2005, AERMOD was adopted by the EPA and promulgated as their preferred regulatory model, effective as of December 9th of 2005. [6] The entire developmental and adoption process took 14 years (from 1991 to 2005).

Features and capabilities of AERMOD

Some of the primary features and capabilities of AERMOD are:[2][7][8]