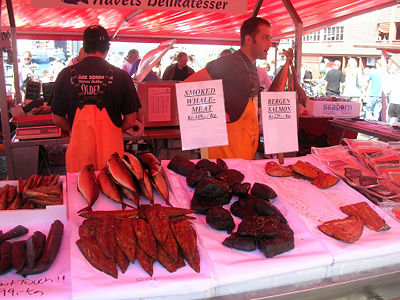 (CC) Photo: Morgan Thiesson
Whale meat and fish on sale at a market in Bergen, Norway.

Whaling refers to the hunting of whales for their blubber (oil) and meat. Today, whaling remains part of the cultures of Japan, Norway and Iceland, and in addition some aboriginal communities also hunt whales.

By 1650 Europeans had already been whaling for the better part of a thousand years, with hunters from the Basque region of northern Spain taking the lead.

As early as 1611 the 50,000+ bowhead whales resident between the east coast of Greenland and the island of Spitzbergen were the subject of intensive commercial hunting effort by Dutch, German, and British whalers. By 1911 the bowheads were nearly extinct. The discovery in 1848 of the rich stock of bowhead whales in the Bering Strait region sparked an oil rush that resulted in more than 2,500 annual whaling cruises to the area between 1848 and 1899.[1]

At first slow whales were caught by men hurling harpoons from small open boats. Early harpoon guns were unsuccessful until Norwegian Sven Foyn invented a new, improved version in 1863 that used a harpoon with a flexible joint between the head and shaft. Norway invented many new techniques and disseminated them worldwide. Cannon-fired harpoons, strong cables, and steam winches were mounted on maneuverable, steam-powered catcher boats. They made possible the targeting of large and fast-swimming whale species that were taken to shore-based stations for processing. Breach-loaded cannons were introduced in 1925; pistons were introduced in 1947 to reduce recoil. These highly efficient devices were too successful, for they reduced whale populations to the point where large-scale commercial whaling became unsustainable. The shore stations on the island of South Georgia were at the center of the Antarctic whaling industry, from its beginnings in 1904 until the late 1920's when pelagic whaling increased. The activity on the island remained substantial until around 1960, when Norwegian-British Antarctic whaling came to an end.

American whaling's origins were in New England, especially Cape Cod, Massachusetts and nearby cities. The oil was in demand chiefly for lamps. Hunters in small watercraft pursued right whales from shore. By the 18th century, whaling in Nantucket had become a highly lucrative deep-sea industry, with voyages extending for years at a time and with vessels traveling as far as South Pacific waters. During the American Revolution, the British navy targeted American whaling ships as legitimate prizes, while in turn many whalers fitted out as privateers against the British. Whaling recovered after the war ended in 1783 and the industry began to prosper, using bases at Nantucket and then New Bedford. Whalers took greater economic risks to turn major profits: expanding their hunting grounds and securing foreign and domestic workforces for the Pacific. Investment decisions and financing arrangements were set up so that managers of whaling ventures shared their risks by selling some equity claims but retained a substantial portion due to moral hazard considerations. As a result, they had little incentive to consider the correlation between their own returns and those of others in planning their voyages. This stifled diversity in whaling voyages and increased industry-wide risk.[2]

When a lookout spotted the spray of a distant whale, the captain immediately lowered small wooden boats. When one of the 30-foot boats got alongside the 60-foot beast, its boatsteerer threw a harpoon (whalers called it an "iron") deep into the animal's flesh. It was the job of the boatheader to actually kill the whale when it tired from swimming and thrashing. The men towed the animal back to their ship and secured its carcass to the vessel's side. They stripped off the animal's blubber and then boiled it on deck in large iron pots set over fires in brick stoves, called tryworks. The processes of "cutting in" and "trying out" a whale could take several days and nights of nonstop work. When there were no whales in sight the men did scrimshaw work out of whales' teeth and bone. At the end of the season they sailed home. New Bedford's greatest receipts from its far-flung fleet came in 1845, with 158,000 barrels of sperm oil, 272,000 barrels of whale oil, and 3,000,000 pounds of whalebone.

Ten thousand seamen manned the ships. More than three thousand African American seamen shipped out on whaling boats from New Bedford between 1800 and 1860, about 20% of the entire whaling force.

In port the most successful of the whaling merchants was Jonathan Bourne, who opened offices in New Bedford in 1848. Chandlery shops and storage rooms for whaling outfits occupied the first floor. Lofts and rigging lofts occupied the upper stories; the counting-rooms were on the second floor, with counters and iron railings fencing off the tall mahogany desks at which the bookkeepers stood up, or sat on high stools; about the walls were models of whaleships and whaling prints.

Whale oil was vital in illuminating homes and businesses throughout the world in the 1800s, and served as a dependable lubricant for the machines powering the Industrial Revolution. Baleen (the long keratin strips that hang from the top of whales' mouths) was used by manufacturers in the United States and Europe to make consumer goods such as buggy whips, fishing poles, corset stays and dress hoops.

New England ships began to explore and hunt in the southern oceans after being driven out of the North Atlantic by British competition and import duties. Ultimately, American entrepreneurs created a mid-19th-century version of a global economic enterprise. This was the golden age of American whaling.

An early winter in the north Pacific in September 1871 forced the captains of an American whaling fleet in the Arctic to abandon their ships. With 32 vessels trapped in the ice and provisions insufficient to weather the nine-month winter, the captains ordered the abandonment of the ships and the three million dollars' worth of property carried on board but in the process saved the lives of over 1,200 people.[3]

From the Civil War, when Confederate raiders targetted American whalers, through the early 20th century, the American whaling industry was overwhelmed by new, crippling economic competition, especially from kerosene, which was a superior fuel for lighting. New Bedford, once the fourth busiest port in the United States, gave up whaling.[4]

Whale hunting became an important industry in Newfoundland and Labrador around 1900, thanks to the introduction of Norwegian equipment and techniques. The industry was highly cyclical, with well-defined catch peaks in 1903–05, 1925–30, 1945–51, and 1966–72, after which world-wide bans shut it down.[5]

After a hiatus of 70 years, in 1999, the Makah tribe, in Washington State caught and killed a 30-foot California gray whale. In capturing the whale the Makah revived their whaling practices and revitalized of this tradition that has made them and the related Nuu-chah-nulth tribe unique as whale hunters in North America. Soon the Nuu-chah-nulth people made a similar decision thereby reaffirming their identity as a whaling people and providing a symbol for tribal resiliency, adaptability, and cultural survival.[6]

Th Japanese industry depended on the transfer of whaling technology, including equipment and techniques, from Norway from the late 19th century until the 1930s.[7]

Wolfe (2006) traces the rise of Australia's interest in the Antarctic in the 19th and the first half of the 20th centuries, examining the efforts of individuals, private companies, and later the Australian government to promote and develop an Antarctic whaling industry. The market for whale products, the imperatives of politicians in Australia and abroad, the geography of both Australia and Antarctica, and the character of the Australian population helped to shape this ambition. Of equal importance were the effects of wars and economic depressions. In the end it was a failed ambition. Preoccupied with other priorities, Australia failed to understand and engage with the complexity of the international whaling industry. Swept aside by Japan and other whaling nations, Australia had few choices but to turn its back on Antarctic whaling. Instead, the country's political and economic resources were focused on developing a shore whaling industry on its own coasts.[8]

Transnational environmental actors played the central role in defining and instituting an international norm of antiwhaling, symbolized in the passage of the moratorium on commercial whaling in 1982. This moratorium signaled a rejection of previously held attitudes toward the use of whales as natural resources and the embracing of a protectionist, hands-off approach. Support for this new stance, however, was not forthcoming from pro-whaling states Japan, Norway, and Iceland. Japan at first objected to the moratorium, then went into compliance, and then decided on the resumption of limited commercial whaling. While the Japanese government views the whaling dispute as a threat to resource security and also a danger to interstate respect for differences in custom and cuisine, the need to be perceived as a responsible member of international society exercises a major influence on the formation of Japan's whaling policy, conditioning its rule compliance and prohibiting the independent action pursued by other pro-whaling states.[9]