Visbreaking is a chemical engineering process unit used in petroleum refineries that reduces the viscosity of the residual oil from the refinery's atmospheric or vacuum distillation of petroleum crude oil and increases the yield of more valuable middle distillates (fuel oils) by the refinery.[1][2][3][4]

The process name of "visbreaking" refers to the fact that the process reduces (i.e., breaks) the viscosity of the residual oil.

The objectives of visbreaking are to:

Basically, a visbreaker thermally cracks large hydrocarbon molecules (into smaller molecules} by heating the residual oil from the refinery's crude oil atmospheric or vacuum distillation units in a furnace to reduce its viscosity. It also produces by-product (LPG, naphtha (a component of gasoline) and fuel oils as well as refinery fuel gas.

In soaker visbreaking, the bulk of the cracking reaction occurs not in the furnace but in a drum located after the furnace called the soaker drum. The oil is held in the soaker drum at an elevated temperature for a pre-determined period of time to allow cracking to occur before it is routed into a distillation column (called an atmospheric fractionator) operating at essentially atmospheric pressure where the products of the cracking (gas, naphtha and fuel oil) are separated and recovered. In soaker visbreaking, lower temperatures are used than in coil visbreaking. The longer duration of the cracking reaction that is provided by having a soaker drum compensates for the lower temperatures.

As for the products separated and recovered in the atmospheric fractionator, the gas is subsequently separated into refinery fuel gas and LPG. The naphtha is used as a component of the refinery's endproduct gasolines. The fuel oil can be diesel oil, heating oil and/or higher-boiling fuel oil. 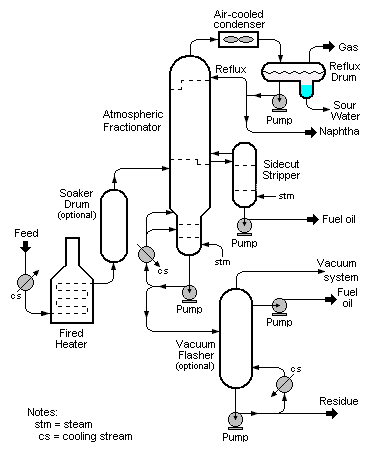 The bottoms from the atmospheric fractionator can be further processed by feeding it to a vacuum fractionator called a vacuum flasher. In the vacuum flasher, additional high-boiling fuel oil (called gas oil) can be recovered and routed either to fluid catalytic cracking (FCC) or hydrocracking units in the refinery. The bottoms from the vacuum-flasher is referred to as tar or pitch and is routed to the refinery's fuel oil blending system. In some refineries, visbreaker tar is routed to a delayed coker for the production of certain special petroleum cokes such as anode coke or needle coke.

From the standpoint of yield, there is little or nothing to choose between the two approaches. However, each offers significant advantages in particular situations:

De-coking: The cracking reaction forms petroleum coke as a byproduct. In coil visbreaking, this lays down in the tubes of the furnace and will eventually lead to fouling or blocking of the tubes. The same will occur in the drum of a soaker visbreaker, though the lower temperatures used in the soaker drum lead to fouling at a much slower rate.

Coil visbreakers therefore require frequent de-coking. This is quite labor intensive, but can be developed into a routine where tubes are de-coked sequentially without the need to shutdown the visbreaking operation.

Soaker drums require far less frequent de-coking but their being taken out of service normally requires a complete halt to the operation. Which is the more disruptive activity will vary from refinery to refinery.

Fuel Economy: The lower temperatures used in the soaker approach mean that these units use less fuel. In cases where a refinery buys fuel to support process operations, any savings in fuel consumption could be extremely valuable. In such cases, soaker visbreaking may be advantageous.

The quality of the feed going into a visbreaker will vary considerably with the type of crude oil that the refinery is processing. The following is a typical quality for the vacuum distillation residue of Arabian light (a crude oil from Saudi Arabia and widely refined around the world):

Once this feedstock has been processed in a visbreaker (and there will be considerable variation from visbreaker to visbreaker as no two will operate under exactly the same conditions) the reduction in viscosity is dramatic:

The yields of the various hydrocarbon products will depend on the "severity" of the cracking operation as determined by the temperature the oil is heated to in the visbreaker furnace. At the low end of the scale, a furnace heating to 425 °C would crack only mildly, while operations at 500 °C would be considered as very severe. Arabian light crude residue when visbroken at 450 °C would yield around 76% (by weight) of tar, 15% middle distillates, 6% gasolines and 3% gas and LPG.