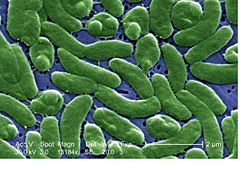 Vibrio vulnificus is a rod-shaped, Gram-negative bacterium that ferments lactose. It is a halophile and can be found in warm coastal waters and is very common in the Gulf of Mexico and its coast. Vibrio vulnificus grows best in the warm months when the water temperature is between 20 to 24° C and cannot be found in cold water.[1]

It is also motile and like two other bacteria found in the Family Vibrionaceae, Vibrio cholerae and Vibrio parahaemolyticus, is a human pathogen. It is known to cause very serious problems and sometimes death in humans if it is ingested or if it contaminates an open wound in the skin.[2]

Strains of V. vulnificus can be divided in three biotypes; strains virulent for humans are categorized in biotypes 1 and 3 while strains that are virulent for fish are classified as biotype 2. Gene sequencing has allowed for the identification of the virulence genes in V. vulnificus and the ability to better the examination of an infection. This organism was first described as a pathogen in 1976 by Hollis et al.

The biotype 1 strain of Vibrio vulnificus has two circular chromosomes and a smaller plasmid. The larger of the two chromosomes is 3,354,505 bp long while the smaller chromosome is 1,857,073 bp long. The plasmid identified was of 48,508 bp. A super- integron containing 188 gene cassettes was also identified. These gene cassettes vary greatly among the different strains and are distinctive for each Vibrio species. Genes that encode for the production of capsular polysaccharide, RTX, toxins, and type IV pilus (all of which play an important role in the virulence of the strain) along with other genes can be found on the chromosome. Multiple rearrangements, gene duplications, and signs of horizontal transfer were also present on the genome.[3] 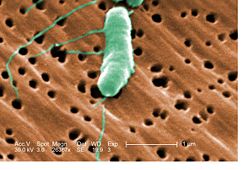 This bacterium can have a flagellum which allows for its motility. It can also have type IV pili which may be a factor of virulence since they help the bacteria attach to the epithelial cells. Some strains of V. vulnificus are capsulated while others are not. The presence of capsular polysaccharide can greatly increase the virulence of the bacteria. Some strains of V. vulnificus are known to ferment lactose while others ferment sucrose.

Marine environments and its inhabitants can serve as shelters for V. vulnificus. Organisms that harbor this bacterium include oysters, eels, shellfish and seaweed. When these organisms are consumed either raw or undercooked by humans the V. vulnificus (present in the seafood) can cause great damage to the health of person and sometimes even death.

Vibrio vulnificus can cause serious damage to human beings especially since its infectious dose is not known. It can enter the body if one consumes raw or undercooked seafood (especially oysters)or if a preexisting open wound is exposed to contaminated water.

In a healthy person, ingesting V. vulnificus can cause gastroenteritis which is characterized by diarrhea, vomiting, and stomach aches. Sepsis, ulceration, and necrotizing fasciitis among other things are also common if an open wound is infected. In a person who already has a disease that compromises his/her immune system (such as liver disease, cancer, HIV, etc) the consequences of infection by this bacterium are far more severe. V. vulnificus can cause primary septicemia or bloodstream infections which can then lead to high fevers, septic shock and death. There is a fifty percent chance of fatality in immunocompromised persons.

There are a number of enzymes produced by the bacterium that assist in the infection. Some of these enzymes are lipase, DNAase, and mucinase. The presence of polysaccharide capsules, lipopolysaccharide (LPS), RTX toxins and type IV pili (which allow the bacterium to attach to the epithelial cells) allow for a stain to be virulent. People with Vibrio vulnificus infections are treated antimicrobial agents. Some antibiotics that work the most effectively are tetracycline, aminoglycosides, and third- generation cephalosporins.

This organism does not produce any enzymes that prove beneficial to humans. It does, however, produce endotoxins and enzymes that could increase its virulence. These enzymes and toxins include RTX toxins, lipopolysaccharides, lipases, and proteases among others.

Vibrio vulnificus Damages Macrophages during the Early Phase of Infection

Even though there are a number of virulence factors, the expression of capsular polysaccharide (CPS) is related to the fatality in animal models. Strains of V. vulnificus that are encapsulated are much more lethal than strains that are not. This is because the capsular polysaccharide serves to protect the strain from undergoing phagocytosis by macrophages and neutrophils. Studies have shown that lymphocytes in the host are lost through apoptosis induced by V.vulnificus. Through this research it is shown that the clinical strain was very effective in inducing apoptosis in macrophage while the environmental strain was not able to.

This research shows that the presence of the alternate sigma factor, RpoS, plays a very important role in the survival of Vibrio vulnificus. Since this bacterium is exposed to different environments (human hosts along with hosts in the aquatic environment), it must adapt to the stress that these environments cause. A low pH, osmotic stress, starvation, and temperatures that are not suitable for the growth of this bacterium are just some of the stresses. Not only does RpoS help Vibrio vulnificus respond to stressful environmental changes but it is also involved in the organism’s virulence.

To study the role of RpoS in V. vulnificus, researchers created an rpoS mutant strain. This was done by homologous recombination. The results showed that the rpoS mutant was more vulnerable to stress caused by environmental changes, had reduced motility and had a decrease in the activity of five of the nine exoenzymes tested.

Studies have also shown that RpoS regulates the expression of certain genes that encode for proteins involved in tissue damage that arises with the infection. This research demonstrates the importance of RpoS in the survival and virulence of pathogens such as V. vulnificus.[5]

Evidence for an Intermediate Colony Morphology of Vibrio vulnificus