In physics, chemistry, and chemical engineering, the van der Waals equation is an equation of state for a fluid composed of particles that have a non-zero size and a pairwise attractive inter-particle force (such as the van der Waals force.) It was derived by Johannes Diderik van der Waals in his doctoral thesis (Leiden 1873)[1], based on a modification of the ideal gas law. The importance of his work was the recognition that the gas and liquid phase of a compound transform continuously into each other. Above the critical temperature there is even no difference between the gas and the liquid phase, which is why it is proper to speak of the equation of a fluid, a generic term for liquid and gas.

Consider a vessel of volume V filled with n moles of particles (atoms or molecules) of a single compound. Let the pressure be p and the absolute temperature be T, then the van der Waals equation reads

a is a measure of the strength of attraction between the particles,
b is the volume excluded from V by one mole of particles,
R is the gas constant, R = NA k, where k is the Boltzmann constant and NA is Avogadro's constant.

The van der Waals parameter b is proportional to NA times the volume of a single particle—the volume bounded by the atomic radius. In van der Waals' original derivation, given below, b/NA is four times the volume of a particle, which is seen as a hard sphere. Observe that the pressure p goes to infinity when the container is completely filled, so that there is no void space left for the particles to move. This occurs when V = n b. 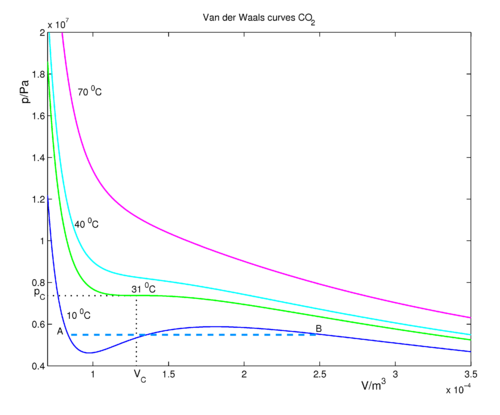 For large volume the pressure is low and the fluid obeys approximately the ideal gas law p V = n R T for all temperatures shown. If we decrease the volume, the pressure rises. Consider the (blue) isotherm of 10 0C, which is below the critical temperature. Decrease the volume until we reach the point B, where condensation (formation of liquid CO2) starts. At this point the van der Waals curve is no longer physical (excluding the possibility of the occurrence of an oversaturated, metastable gas), because from B downward to smaller volume, the pressure stays constant—equal to the vapor pressure of the liquid. This behavior is given by the light-blue dashed line. Decreasing the volume further, we end at point A where all molecules are in the liquid phase, no molecules in the gas phase are left. When we now diminish the volume of the vessel, which contains only liquid, the pressure will rise steeply, because the compressibility of a liquid is considerable smaller than that of a gas.

If we follow the (green) curve of critical temperature, we will meet a horizontal point of inflection (first and second derivatives of p wrt V are zero). If we follow any of the two isotherms, shown in the figure, of temperature higher than the critical temperature, we will not see any liquid-gas phase transition, the higher pressure fluid will resemble a liquid, while at lower pressures the fluid will be more gas-like. Nowhere on these higher isotherms will we see a gas-liquid interface appear.

Although the maximum and minimum in the blue van der Waals curve are not physical, the corresponding equation was a great scientific achievement in 1873. Even today it is not possible to give a single equation that describes correctly the gas-liquid phase transition.

In the first-order phase transition range of (p,V,T) (where the liquid phase and the gas phase are in equilibrium) it does not exhibit the empirical fact that p is constant (equal to the vapor pressure of the liquid) as a function of V for a given temperature.

In the usual textbooks one finds two different derivations. One is the conventional derivation that goes back to van der Waals and the other is a statistical mechanics derivation. The latter has as its major advantage that it makes explicit the intermolecular potential, which is out of sight in the first derivation.

GNU Image
The cyan colored spheres are two fluid particles, of diameter d, in closest contact. The (black) enveloping sphere is excluded to other particles.

Next assume that all particles are hard spheres of the same finite radius r = d/2 (the van der Waals radius). The effect of the finite volume of the particles is to decrease the available void space in which the particles are free to move. We must replace V by V-b, where b is called the excluded volume. The corrected equation becomes

The excluded volume b is not just equal to NA times the volume occupied by a single particle, but actually 4 NA times that volume. To see this we must realize that two colliding particles are enveloped by a sphere of radius d that is forbidden for the centers of the other particles, see the figure. If the center of a third particle would come into the enveloping sphere, it would mean that the third particle penetrates any of the other two, which, by definition, hard spheres are unable to do. The excluded volume b/NA per particle pair is 4π/3 × d3 = 32π/3 × r3, so that the excluded volume is not 8π/3 × r3 (the sum of volumes of the two particles), but four times as much.

It was a point of concern to van der Waals that the factor four yields actually an upper bound, empirical values for b are usually lower. Of course molecules are not infinitely hard, as van der Waals assumed, but are often fairly soft.

Next, we introduce a pairwise attractive force between the particles. Van der Waals assumed that, notwithstanding the existence of this force, the density of the fluid is homogeneous. Further he assumed that the range of the attractive force is so small that the great majority of the particles do not feel that the container is of finite size. That is, the bulk of the particles do not notice that they have more attracting particles to their right than to their left when they are relatively close to the left-hand wall of the container. The same statement holds with left and right interchanged. Given the homogeneity of the fluid, the bulk of the particles do not experience a net force pulling them to the right or to the left. This is different for the particles in surface layers directly adjacent to the walls. They feel a net force from the bulk particles pulling them into the container, because this force is not compensated by particles between them and the wall (another assumption here is that there is no interaction between walls and particles). This net force decreases the force exerted onto the wall by the particles in the surface layer. The net force on a surface particle, pulling it into the container, is proportional to the number density C ≡ NA/Vm. The number of particles in the surface layers is, again by assuming homogeneity, also proportional to the density. In total, the force on the walls is decreased by a factor proportional to the square of the density and the pressure (force per unit surface) is decreased by

Upon writing n for the number of moles and nVm = V, the equation obtains the form given above,

It is of some historical interest to point out that van der Waals in his Nobel prize lecture gave credit to Laplace for the argument that pressure is reduced proportional to the square of the density.

The canonical partition function Q of an ideal gas consisting of N = nNA identical particles, is

is the thermal de Broglie wavelength,

with the usual definitions: h is Planck's constant, m the mass of a particle, k Boltzmann's constant and T the absolute temperature. In an ideal gas q is the partition function of a single particle in a vessel of volume V. In order to derive the van der Waals equation we assume now that each particle moves independently in an average potential field offered by the other particles. The averaging over the particles is easy because we will assume that the particle density of the van der Waals fluid is homogeneous. The interaction between a pair of particles, which are hard spheres, is taken to be

Because the particles are independent the total partition function still factorizes,

, but the intermolecular potential necessitates two modifications to q. First, because of the finite size of the particles, not all of V is available, but only

(excluded volume per particle). Second, we insert a Boltzmann factor

to take care of the average intermolecular potential. We divide here the potential by two because this interaction energy is shared between two particles. Thus

The total attraction felt by a single particle is,

where we assumed that in a shell of thickness dr there are N/V 4π r2dr particles. Performing the integral we get

Hence, we obtain by the use of Stirling's approximation,

where Φ is a constant. From statistical thermodynamics we know that

The extensive volume V  is related to the volume per particle v=V/N  where N = nNA  is the number of particles in the system. As before, we consider structureless particles with three translational degrees of freedom only. The equation of state does not give us all the thermodynamic parameters of the system. We can take the equation for the Helmholtz energy A

From the equation derived above for lnQ, we find

This equation expresses A  in terms of its natural variables V  and T , and therefore gives us all thermodynamic information about the system. The mechanical equation of state was already derived above

The entropy equation of state yields the entropy (S )

from which we can calculate the internal energy

Similar equations can be written for the other thermodynamic potentials and the chemical potential, but expressing any potential as a function of pressure p  will require the solution of a third-order polynomial, which yields a complicated expression. Therefore, expressing the enthalpy and the Gibbs energy as functions of their natural variables will be complicated.

Although the material constants a and b in the van der Waals equation depend on the fluid considered, the equation can be recast into a single form applicable to all fluids.

The critical pressure and critical volume can be computed from the condition that the tangent in the critical point is horizontal and that it is a point of inflection:

the van der Waals equation of state given above (with n = 1) can be recast in the following reduced form: