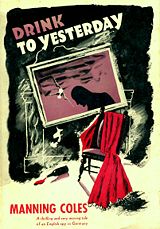 The first Hambledon adventure, at the end of which he is lost at sea and presumed dead

Thomas ("Tommy") Elphinstone Hambledon is the fictional protagonist of 26 spy novels written by the British author Manning Coles from 1940 through 1963. In the course of his career he is described variously as working for the Foreign Office, British Intelligence, and MI5. In his first appearance in Drink to Yesterday he is a youthful teacher in a British boarding school ("Chappell's School at Weatherley in Hampshire") and, during school vacations, a spy in Germany for the Foreign Office. At the end of this almost unremittingly grim book, which takes place in World War I, he disappears at sea and is presumed dead. He reappears as the hero of the next Mannings book, Pray Silence (published in the United States as Toast to Tomorrow), which begins in the 1920s and is somewhat more light-hearted in tone. Hambledon, who speaks perfect German, is now an amnesiac in Munich who believes he is actually a German. He then gradually works his way up in the fledgling Nazi Party. As he and Adolf Hitler watch the flames of the Reichstag fire in 1933, Hambledon suddenly recovers his memory—just as Hitler appoints him Chief of Police. For the next five years Hambledon attempts to carry on his new duties while simultaneous trying to sabotage Hitler and some of his plans. At the end of the book, as his situation becomes increasingly untenable, Hambledon fakes his own death in Danzig and stows away on an English cargo ship bound for Cardiff. As the book closes, he is listening to a broadcast on board the ship of Hitler himself giving the eulogy at his own supposed funeral.

In only one of the books is Hambledon ever described as anything being anything short, spare, and with military bearing. In the opening chapter of Toast to Tomorrow, which takes place in late March and early April of 1933, when, presumably, Hambledon is about 45 to 50 years old, we are first told that he has a "short spare figure" and that in contrast to his "long, thin and melancholy" manservant he is "short and cheerful."[1] A few pages later, we have, from a British agent he has helped escape from Nazi Germany, the only detailed description of him in any of his 26 book appearances:

"Rather a nondescript little man, grey eyes, rather ginger hair going grey, short but not fat, thin face with duelling scars across his right cheek, quick, energetic walk, rather a pleasant voice, cheerful looking fellow, looked as though he could see a joke. Short nose, wide mouth rather thin-lipped, square jaw.[2]

The "duelling scars", actually injuries that he sustained during his disappearance at sea in 1918, are later removed by surgery in England.

Wartime career after returning to England

Safe in England after an absence of more than 20 years, Hambledon continues his career as an intelligence agent throughout World War II. In They Tell No Tales (1941), he is faced with the problem of a series of unexplained sinkings of ships not long out of harbor in Portsmouth. In Green Hazard (1945), one of his most gripping adventures, the Gestapo mistake him for a Professor Ulseth, the supposed inventor of a new and extremely powerful high explosive, and kidnap him from Switzerland. He then finds himself once again in Berlin, where he has to fool his hosts into believing that he actually knows something about chemistry while praying that they will fail to recognise a prominent former colleague.

After the war, Hambledon continues his career in the Foreign Office and helps thwart a number of Communist plots as well as dealing with more mundane matters like diamond smuggling. In these postwar adventures he is frequently aided by Forgan and Campbell, a semi-comic team of model-makers from the Clerkenwell Road in London, who first appear in A Brother for Hugh (1947). In this and some of the other subsequent novels, Hambledon initially plays a fairly minor role—in The Man in the Green Hat (1955), for instance, he hardly appears in the first half of the book.

As is generally the case with long-running fictional protagonists such as Nero Wolfe and Matt Helm, Hambledon eventually became both non-aging and without much of the background given to him in the earliest books. In Drink to Yesterday he is simply "Tommy Hambledon", with no middle name, and is a youthful master of modern languages at Chappell's, which he teaches so that his pupils learn to converse with taxi-drivers and to adopt the manners and customs and modes of thought of whatever country they find themselves in. No specific age is given for him, but he is almost certainly in his twenties. "A parson's son with exiguous private means, his pay was small, and his tastes cheerful and expensive." Yet he could always go abroad for his holidays, "and one would really wonder where he got the money...." He is also a captain in the "Territorials" and the man in charge of the Officer Training Corps at Chappell's. By the end of World War II, he has been in and out of Germany for nearly 30 years but that background gradually vanishes from the later novels and although he has become resolutely middleaged with graying hair and an upright, very military carriage, he no longer ages at all. Although he was, at one time, apparently quite high up in the Secret Service he now appears to be simply a senior operative, one who can be sent anywhere in the world on what sometimes appear to be fairly trivial ventures.

Although Hambledon speaks flawless German and French, being able to pass as a native in both countries, and "collects accents as other men collect stamps", he is, surprisingly, completely unmusical. "I only know two tunes really well," says Hambledon in Green Hazard. "One of them is 'God Save the King,' but I'm not sure which." [3] Thirteen years later, in No Entry, he is described as "a man so nearly tone-deaf that he always said that the only way to recognize a song was by the words."[4]

In Birdwatcher's Quarry we are told that he habitually sleeps with his Luger automatic under his pillow:

his more intimate friends who knew his habits used to say that if for any reason the gun was not under the pillow Hambledon always dreamed that he was walking across the forecourt of Buckingham Palace, stark naked, at the time of the Changing of the Guard. A sense of nudity.[5]

What good it does him, however, is questionable. In this particular instance a noctural intruder into his hotel room is able to remove the gun from beneath the sleeping Hambledon's pillow without awakening him.