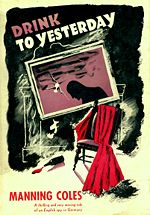 Manning Coles was the pseudonym of two British writers, Adelaide Frances Oke Manning (1891-1959) and Cyril Henry Coles (1899-1965), who wrote many spy thrillers from the early 40s through the early 60s. The fictional protagonist in 26 of their books was Thomas Elphinstone Hambledon, usually called Tommy Hambledon, who works for the Foreign Office.

Manning and Coles were neighbors in East Meon, Hampshire. Coles worked for British Intelligence in both the World Wars. Manning worked for the War Office during World War I. Their first books were fairly realistic and with a touch of grimness; their postwar books perhaps suffered from an excess of lightheartedness and whimsy. They also wrote a number of humorous novels about modern-day ghosts, some of them involving ghostly cousins named Charles and James Latimer. These novels were published in England under the pseudonym of Francis Gaite but released in the United States under the Manning Coles byline.

"Death Keeps a Secret", 1960 (in The Mystery Bedside Book, edited by John Creasey)