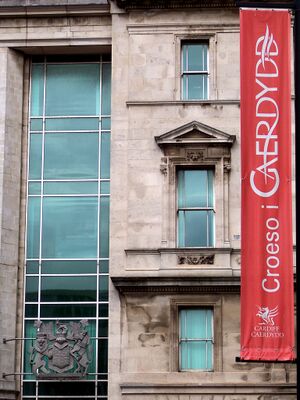 (CC) Photo: Stefan Baguette
Croeso i Gaerdydd! This Welsh language 'Welcome to Cardiff' banner greeted visitors to the Cardiff in 2006.

Cardiff (Welsh: Caerdydd) is the capital of Wales in the United Kingdom, with a population of about 320,000. It grew as a port in the nineteenth century, with quality Welsh coal shipped worldwide. It is the largest city in Wales, and in modern times has become an important cultural centre, hosting for example the 1999 Rugby Union World Cup. It is also home to the National Assembly for Wales, to which some legislative responsibility has been devolved from the UK government.