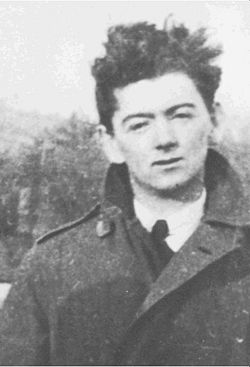 Thomas Barry (1897-1980) was an Irish revolutionary and folk hero, born on 1 July 1897 in Killorglin, co. Kerry, the eldest son and second of eleven children of Thomas Barry, a policeman, and his wife Margaret Donavon. After Tom was born his father went into shopkeeping in their native county of Cork. He was educated in convent and national schools in Rosscarby and Bandon in west Cork until 1911, when he spent a year as an apostolic student at Mungret college in co. Limerick. Eschewing the priesthood he became a clerk but stayed only until joining the royal artillery in 1915. He turned down the offer of a commission, saw action in France and Mesoptamia, where he was both gassed and wounded.

Barry was demobilised in early 1919 and returned home to Bandon an active former serviceman. That September he enrolled in a business course in Cork city, but gave it up on joining the 3rd Cork brigade of the Irish Republican Army in the summer of 1920. His lifelong conversion to revolutionary nationalism dates from this point, though in his own words he developed his nationalist consciousness after reading of the Easter Rising while serving in Mesopotamia.

Barry’s position as a training officer was probationary until his command of the Kilmichael ambush of 28 November 1920. This action, which wiped out a patrol of auxiliary policemen, transformed him into a flying column leader and underground legend throughout Ireland. The details of the ambush – why surviving auxiliaries were executed – became controversial, especially later in his life. Kilmichael was an important milestone in the war to date as it was the first successful IRA encounter with the much feared auxiliaries. By smashing the myth of invincibility, the IRA was able to assert itself as an effective fighting force once again.

After Kilmichael, Barry was involved in most of the major engagements with crown forces in west Cork, and in a parallel series of murders of suspected informers. He established a reputation as an aggressive and abrasive commander, attracting both loyalty and enmity. He commanded the famous engagement of Crossbarry, when Barry's column of 104 men out maneouvered an encircling movement of 1,200 British soldiers. Crossbarry augmented Barry's reputation in Ireland as one of the most effective Flying Column commandents in the country.

Following the truce of 11 July 1921 Barry was appointed the chief liaison officer for Cork, a position requiring tact and which he quickly resigned. On 22 August he married Leslie Price (1897-1984), a teacher and Cumann na mBan activist from Dublin. Both were militantly opposed to the Anglo-Irish treaty of 6 December. At IRA conventions in early 1922 he advocated using force to prevent the imminent general election, as well as the resumption of war with Britain. His proposals were defeated but his efforts helped divide Republican forces, putting him amongst the most extreme opponents of the treaty.

When the Irish Civil War began on 28 June Barry was almost immediately captured by the national army in Dublin, but managed to escape in September. He then resumed his career as a Flying column leader. His efforts were as self directed and as successful as before, but the IRA as a whole was losing the war rather badly by winter. Faced with defeat, Barry became an advocate of peace negotiations. These were blocked by Liam Lynch, the IRA chief of staff, whom he despised. Once Lynch was killed in April 1923 Barry was promoted to the supreme army council and backed its unilateral ceasefire order.

Barry maintained his local influence and high rank in the IRA throughout the 1920s and 1930s, while working as a superintendent for the Cork harbour commissioners. He led numerous marches, demonstrations, and riots, and was jailed on several occasions in the 1930s. He was also involved in attacks on supposed enemies, including the murder of Admiral Henry Somerville in 1936. In the same year he was appointed chief of staff. His plan to launch a guerrilla war in Northern Ireland was a non starter, owing as much to his own poor leadership as to flawed planning and organisation. He resigned in 1938 rather than take part in the subsequent English bombing campaign. Apart from an unsuccessful foray into a Cork by-election in 1946, this ended his political career.

Barry published his memoirs of 1920-21, Guerrilla Days in Ireland, in 1949. These were a rapid and enduring success and augmented his popular reputation, which was frequently rehearsed at commemorations and in newspaper and radio interviews. General Tom Barry, as he was latterly known, died at his home in Cork on 2 July 1980. He is considered an Irish national hero.