Tohoku (東北地方 Toohoku-chihoo) is a region of Japan located on Honshu island. It consists of six administrative areas (prefectures), and is home to the cities of Sendai, Akita and Aomori, among others.[1]

Tohoku comprises the northernmost region of Honshu, and is divided into six prefectures: Akita, Aomori, Fukushima, Iwate, Miyagi and Yamagata. 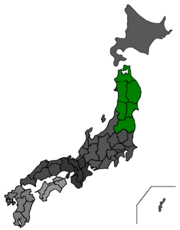 In the Edo period gross migration numbers were high, but the net impact of internal migration was low. The primary reasons for leaving the village were marriage and employment, with few villagers moving more than ten kilometers away.

Famines were a recurring problem. The new Meiji government, 1869-70, attempted to meet the great famine in Northeast Japan. To keep the defeated Northeast under control after the civil war, the government implemented various relief policies such as an embargo against feudal lords, the granting of a loan, and the transfer of government-owned rice. The government brought in great quantities of domestic rice, and the importation of Nanking rice. It emphasized strengthening national rule over the northeast after the famine such as the abolition of local inspectors, the streamlining of public administration, the appointment of agreeable men as local administrators, and the Sanriku Conference in the latter half of 1870.